A new roof for Liberato

… and a renewed appreciation for a global community that makes a difference in a small Andean village in Bolivia. 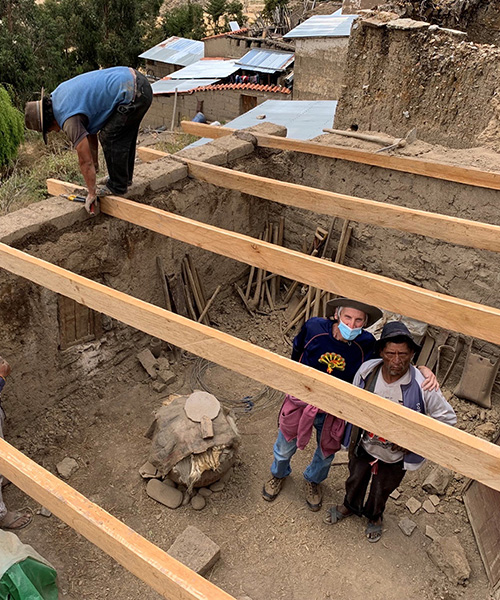 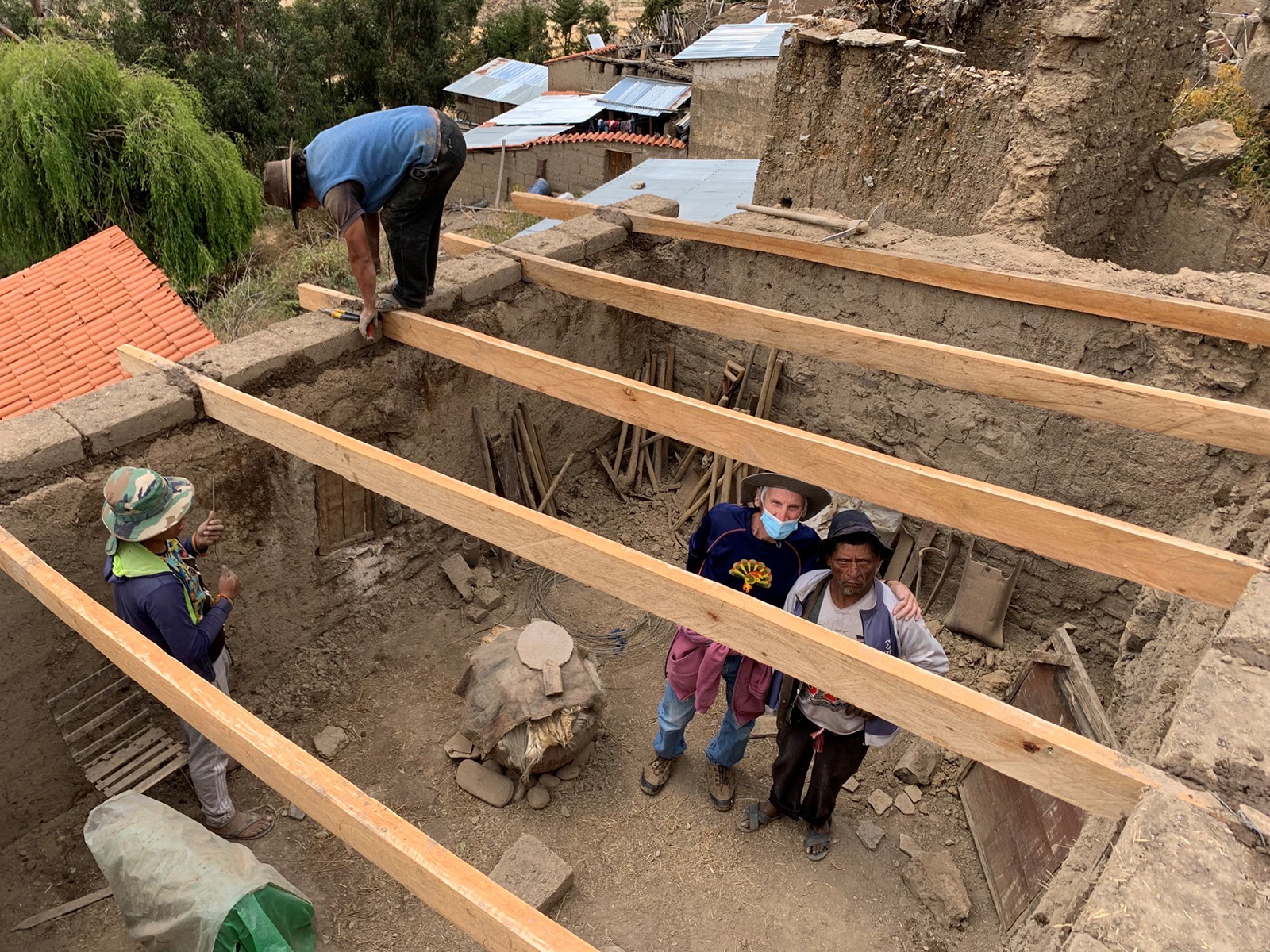 Liberato and Joe, as the roof is being built.

We pull off from the two-lane, rural highway nearly two hours after we began our journey. From our viewpoint just a kilometer from the turn off, we can see the village of Aquerana in a valley behind mountain peaks and beyond nearly dried up rivers. While the dirt trail is easy to navigate in this dry season, the dust is a constant companion as we drive the switch backs up and down the ridges toward the village.

On the road we come across farmers who are steering their sheep and alpacas to their grazing lands. My colleague Juan Carlos invents a story of why the dogs bark and chase us, why the alpacas do not move out of the road and why the sheep run away as soon as we are spotted. I smile and laugh, yet it is very true that each animal reacts very differently to our truck traversing what they see as their trails. 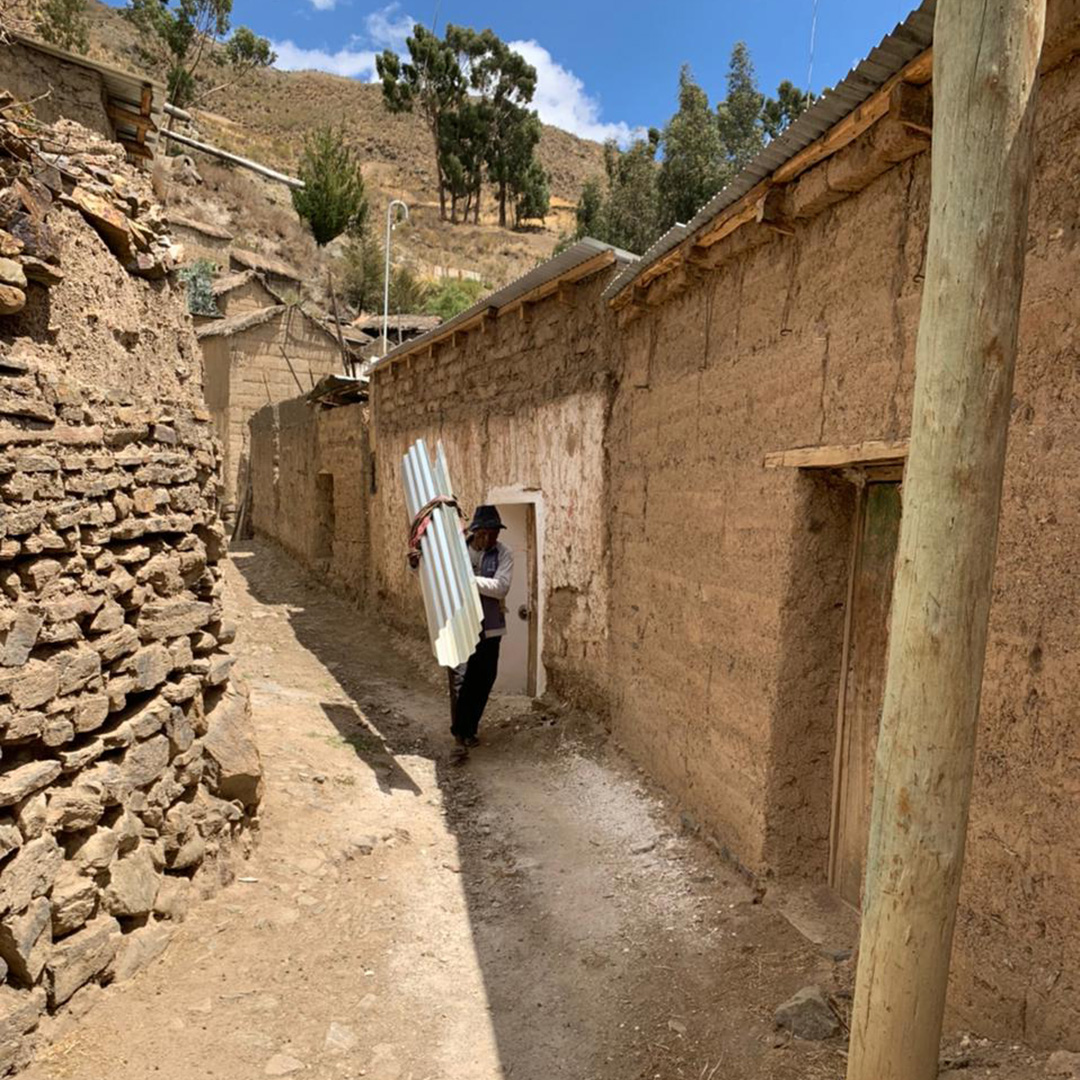 After nearly 50 minutes of trails and without seeing another vehicle, we reach our destination. Aquerana is a community of roughly 40 families, living in adobe-walled, small, thatched-roof homes among very narrow and neatly arranged cobblestone streets constructed in the early 20th century.

Aquerana is home to Liberato. He has never travelled to the city of Cochabamba. He does not have an identity card nor a birth certificate. He lives with his mother and helps out with their wheat and corn crops in their near-by terraced fields. Those farming chores, however, are a real challenge because Liberato has multiple disabilities: intellectual, visual and hearing. His limited vision causes him to walk with an uncertain and hesitating step, and it appears that he has memorized the steps into his home and the few cobblestone streets in his village.

The narrow cobblestone paths, while durable and well maintained, were constructed at a time when wide, motorized vehicles were unknown, and so we have parked about a kilometer away. We arrive with the building materials, sheets of corrugated aluminum roof, wooden beams, nails, bolts, and a roll of chicken wire, so the new roof can be constructed for Liberato’s one-room home. His brother-in-law and neighbors have torn down the old thatch roof, replaced the worn out adobe bricks and have begun to install the bigger roof beams.

After Juan Carlos gently explains in his native Quechua language to Liberato that we need his help to carry the building materials from the truck to his home, Liberato eagerly proceeds to help.

After numerous trips to the truck, we finish unloading the materials just as the noon sun is reaching its peak. Next to Liberato’s room, we encounter his mother, Doña Rosa, and a neighbor, who are preparing lunch using fallen branches that they have collected to cook the wheat-based soup, lamb, potatoes, and corn. 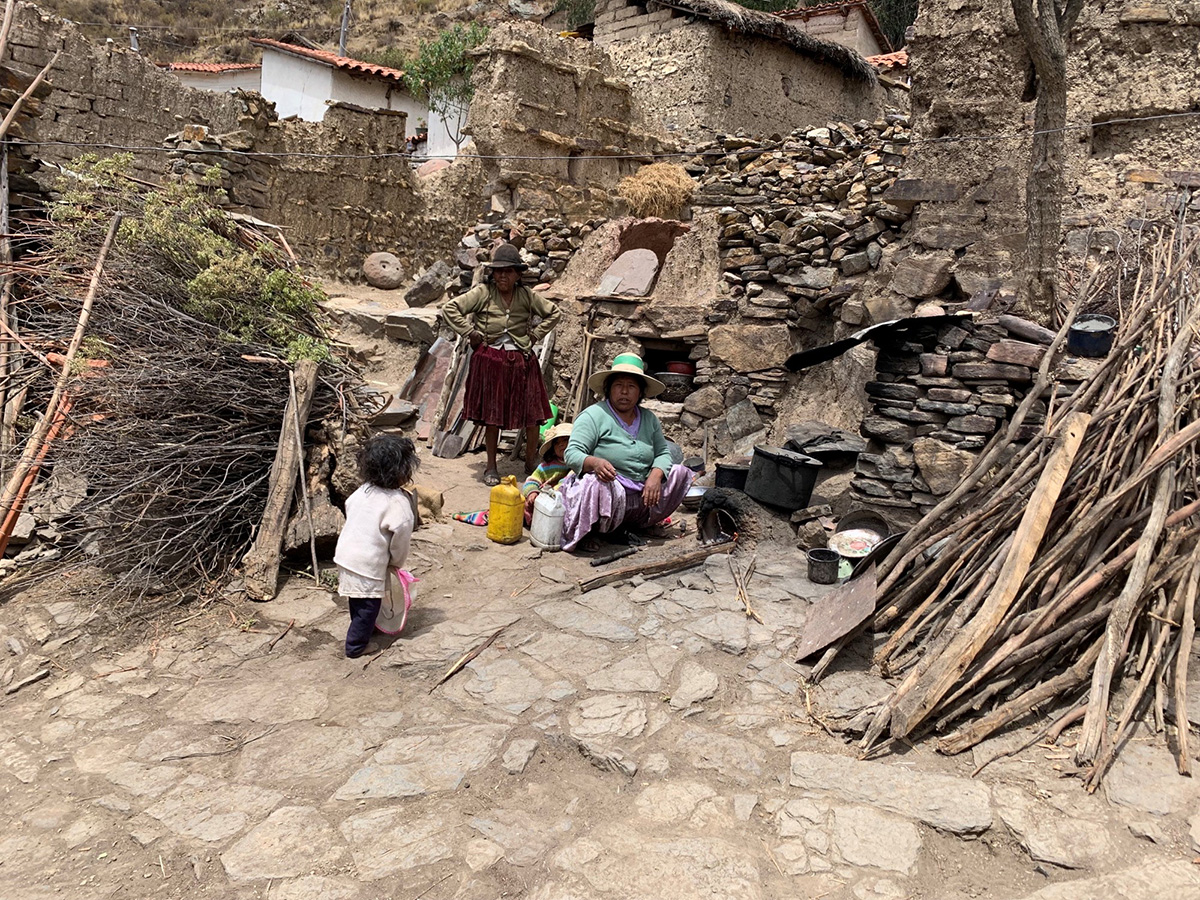 Doña Rosa, the mother of Liberato, with a neighbor

Upon seeing all the new roofing material, Doña Rosa tells me she is very grateful that the wind, dust and rain will no longer fall upon her son Liberato as he sleeps. She motions for me to sit down. Liberato and the workers soon join me, and we are all handed one bowl of soup and one bowl of lamb, potatoes and corn.

The soup is so hot I have to put the bowl down, and as I begin to chew the lamb meat off the bone, I find myself reflecting upon the day. I have discovered a renewed faith in community. Liberato, the neighbors, family members, my teammate Juan Carlos and benefactors from the United States have all joined together to improve the quality of life for a disadvantaged community member. And I now understand better that the community I witness extends far beyond the borders of Aquerana, Cochabamba and Bolivia.

Liberato now enjoys a roof over his head thanks to generosity of people in Bolivia and in the United States. Maryknoll Lay Missioners bridges these communities together.

You too can help build bridges that strengthen the worldwide community. The needs are many. Liberato, for example, is one of more than 500 persons with disabilities with whom Filo and I collaborate to help them improve their lives and enjoy human dignity. 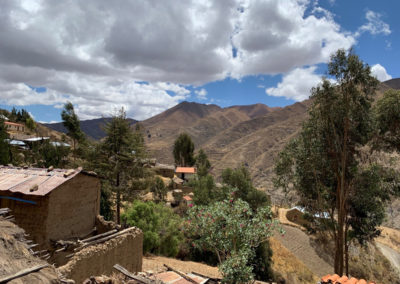 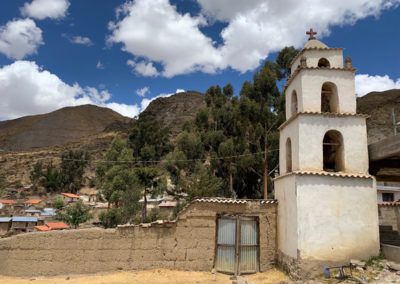 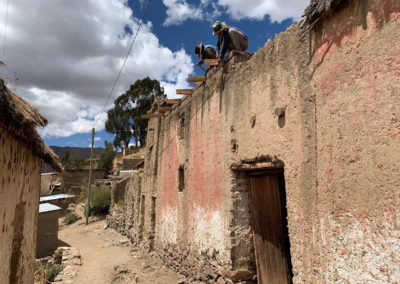 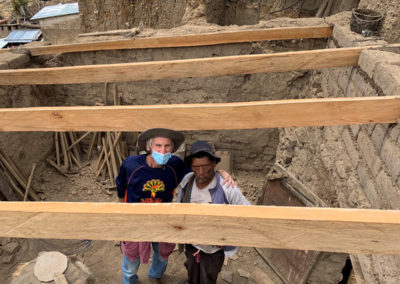