Participants in the restorative justice training course in Óbidos, Pará, Brazil. The Amazon river is in the background.

Spontaneously, at the end of the first day of our restorative justice course, Hildelice, a farmer and fisherwoman in the Amazon area of Pará, Brazil, recited a poem about the day. At other times, she broke into song. She voiced hope in the midst of everyone’s concern about violence.

Hildelice was raised in the community where she lives, one of 13 children living amidst much poverty. Today she is a leader of her community and the coordinator of a women’s pastoral group. She speaks and sings of the current context in a hopeful manner, believing still in Gospel values of sharing, respect for others and giving back to the community. She reminded us of the importance of not being afraid to speak out against violence, the courage to do the right thing, no matter what others say or do.

Óbidos in the state of Pará, on the Amazon River.

Hildelice was one of 30 women leaders whom I met at a restorative justice workshop I recently gave in the Amazon area. All of us had arrived in Òbidos, Pará by boat from six different riverside communities.

On Day 1, the women identified as their main concern wanting to learn ways to deal with all the violence they encounter — interpersonal violence in the family, neighborhood or region and structural violence (the degradation of the river and land by large multinational groups, hunger, domestic violence, unemployment, etc.). They wanted to help those in their communities who are traumatized by violence, and they expressed the hope that our restorative justice course could teach them a way to help resolve conflicts.

Maria Elena, like most people in her community, is a fisherwoman and ribeirinho (a river dweller who lives on the banks of the Amazon area and travels by boat). As the coordinator of her parish community, she works with women and prepares catechists and other pastoral workers. She was taking the training course with the others in her community.

Maria Elena said, “People here have lots of suffering in their lives. We are river dwellers like our ancestors before us. It is they who help us in these difficult times. Fishing is our primary source of income. We learned how to respect the river and not fish for commercial purposes from Nov. 15 until March 15, taking from the river only what was necessary for our survival. That has all changed in the last years and caused conflicts in our communities because of the big fishing companies who overfish and do not respect the environment. They are destroying the fish and the river, causing hunger and lasting damage to the river and our communities. The government is either absent or says nothing. As people of faith, we gather folks, but this situation is causing many conflicts now among the families.” 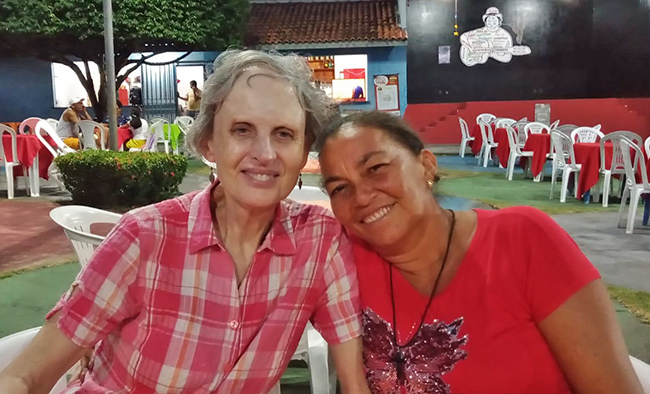 Joanne Blaney, with Maria Elena, a fisherwoman and ribeirinho (a river dweller) and the coordinator of her parish community

Unfortunately, in their communities there has also been a big increase in violence against women and children. Maria Elena explained, “There is so much suffering, it is hard for some people to go on.”

She asked, “How can we learn how to live well together again, working as companions on the journey, as the Gospel calls us to do? I began my journey in the church and believe that I am called and sent by God, and that each of us is also called and sent. Many people here are imprisoned by their refusal to forgive others. They exclude others. Many are very angry and sad at all the violence, and they feel hopeless. As part of the church, we remember always that there are others who have lives much worse than ours. This gives us a perspective to share the little that we have with those who have even less.”

The restorative justice course, she said, was helping her and the other participants to learn ways to deal with conflicts, analyze the violence better, learn what forgiveness really is and find paths to restoring people and relationships.

“I want to be a multiplier of this course in my community and other river communities,” she said. “All of us need to learn how to organize and work collectively against this violence. Some of our community have had to move inland and have planted manioc flour, bananas, corn and beans to help with the hunger. However, illegal logging there also causes problems. So, unfortunately we have many land and river conflicts that affect our communities.”

Maria Elena’s commitment to her community and other river-dwelling communities is remarkable. I see a strong connection to the same struggles of folks in mega-urban São Paulo, where people also identify violence as their Number 1 concern, followed by its many manifestations of unemployment, homelessness, hunger, inequality, etc.

There are strong threads that connect Hildeniece and Maria Elena with other folks whom I have trained and who are now becoming restorative justice facilitators, like: 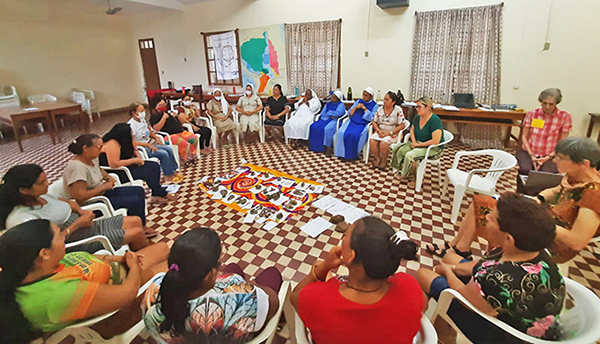 Joanne (standing, right) leads a reflection on violence and nonviolence at the training in Óbidos.

Regardless of where we find ourselves in Brazil (and throughout the world), we seem to encounter an inability to engage in dialogue, to work together and to truly listen—a situation that is causing increasing polarization.

In my experience, the struggle to be a nonviolent person and to learn nonviolent ways to work in our communities is one that unites us. Maryknoll Lay Missioners’ focus on nonviolence is one that speaks to the needs of the people in my restorative justice ministry here in Brazil — in my home base of São Paulo, in the Amazon region and in other places of Brazil where I have been doing this work.

The hunger of folks to learn new ways to deal with the violence and their openness to share what works is very hopeful. Little by little, we can work to change attitudes, actions and structures that cause so much violence and help folks to heal from violence. Through nonviolent attitudes and actions, all of us can contribute in some way to bringing about the “culture of encounter” that Pope Francis speaks of.

May we take courage from the Gospel passage of John 10:10, where Jesus says, “I have come that they may have life, and have it to the full.” Let us work to bring life to all whom we meet.