Stopping a Cambodian holiday during COVID-19

This week’s Khmer New Year is the most important holiday in Cambodia. 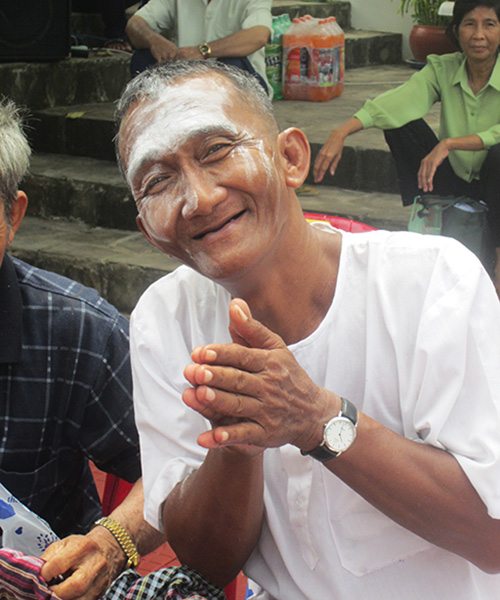 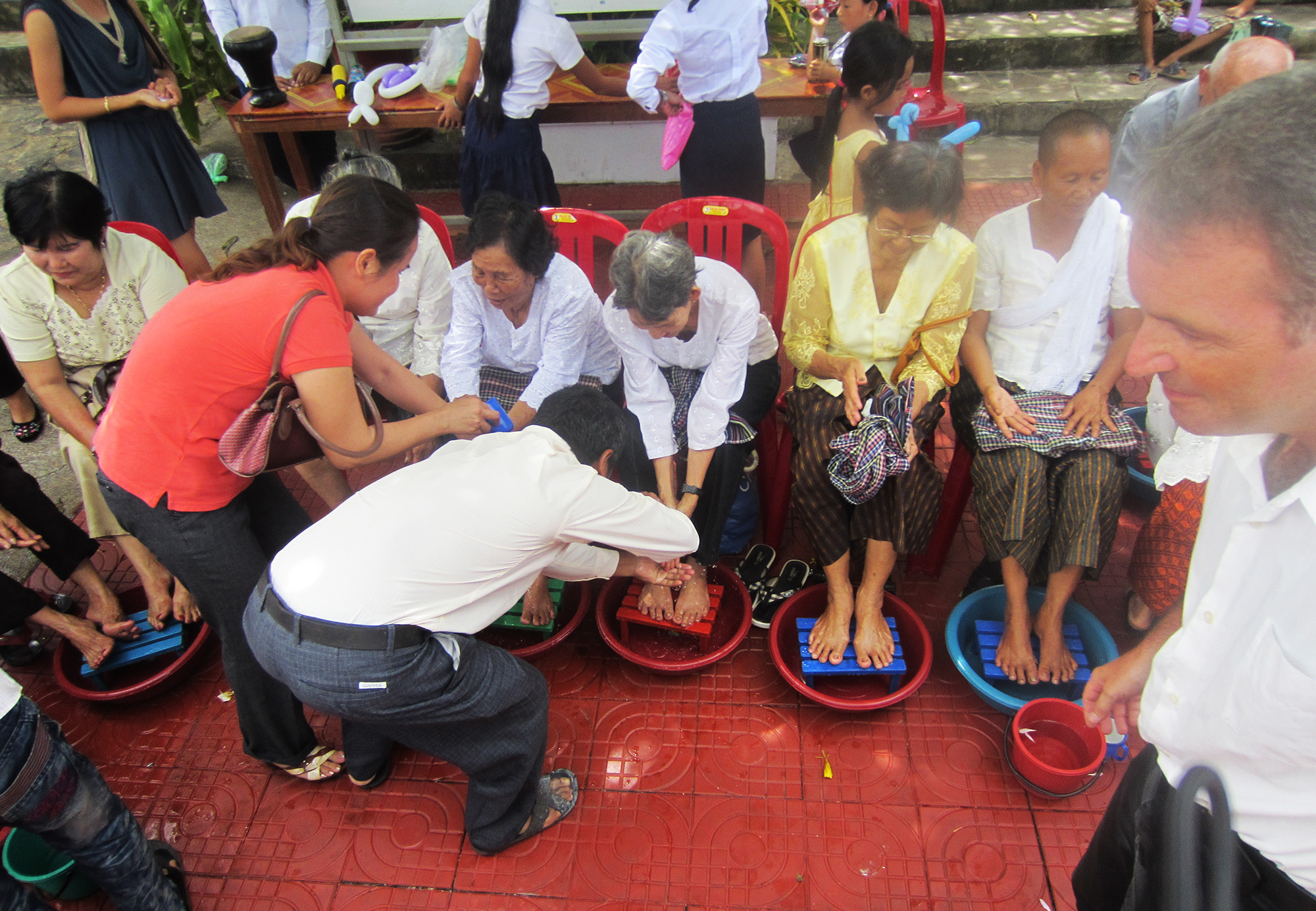 A previous year’s Khmer New Year celebrations at a Catholic church in Sihanoukville combined the Holy Thursday ritual of footwashing with the traditional Khmer New Year washing of the grandparents and elders.

Under normal circumstances at this time here in Cambodia, we would be celebrating the Khmer New Year. But we are not—or should not, if the authorities are successful.

Khmer New Year is the most important holiday in Cambodia. Technically, it is a three-day holiday—April 13 through 15 this year—but it usually stretches out to one or two weeks. Like most Cambodian holidays, it mingles religious and cultural elements. 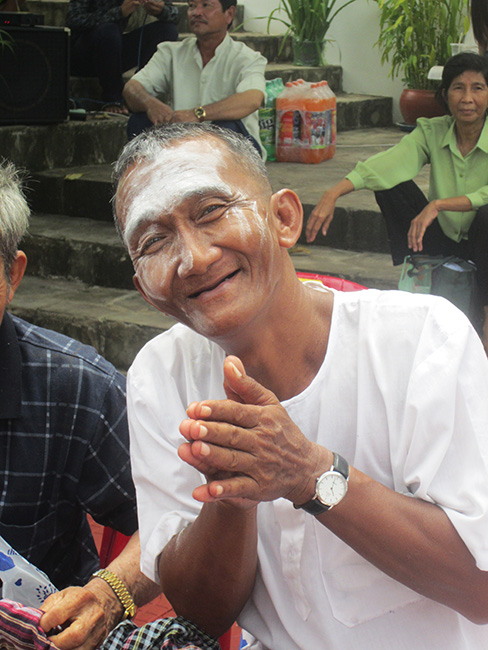 A parishioner at the Sihanouk church, celebrating a previous New Year with talcom powder on his face.

Cambodian Buddhists give thanks for the year; they give alms to the poor via donations at wats (Buddhist temples); they honor their deceased relatives; they wash the Buddha statues, a symbol of washing away past sins; they wash their grandparents too, hoping for their blessings and good wishes.

The festivities mark a time of transition between harvest season and rainy season, when the rice fields soak up needed water for next year’s planting. Cambodians put up their feet and enjoy the fruits of the land. Families are joined together in celebration. It is a time of play (for children and adults), which includes throwing water and talcum powder, as well as a time when special foods are prepared and enjoyed.

So looking at the steps the government here has taken to shut down Khmer New Year in order to prevent the spread of COVID-19 might be a window into Cambodian society, into the critical elements that make the holiday.

On April 7, Prime Minister Hun Sen issued a statement that Khmer New Year was canceled. Stopping the New Year this way seemed like declaring all sunsets canceled. The New Year’s celebration is nearly as reliable as the turn of the Earth, though it would not be the first the prime minister has asserted a special relationship with natural phenomena.

The most obvious risk, which is a necessary part of the holiday, is the mass exodus from Phnom Penh to the countryside. People go from the city to their ancestral homes in the provinces. You can almost hear a pin drop in the capital city during the New Year.

Two days later, the government put into place travel restrictions: no travel from Phnom Penh to the provinces and no travel between provinces. Wise move. It is widely assumed that the reported number of infected persons (officially now only 122) is inaccurate due to the lack of testing here, and it is highly likely that the virus is more prevalent in densely populated Phnom Penh than in the countryside. To enforce this decree, the government has also put the military into place. 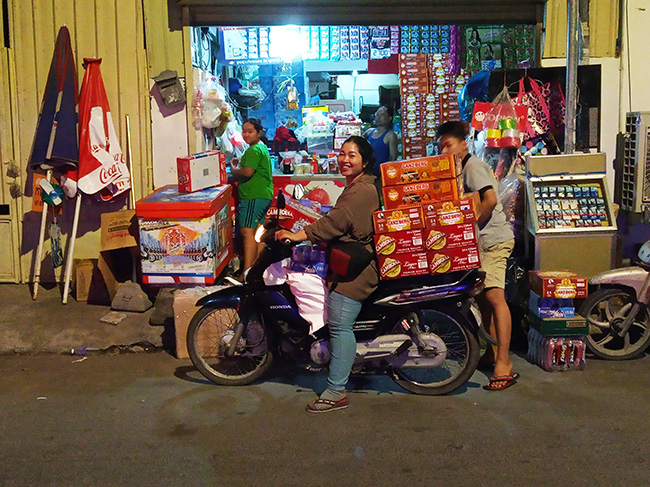 Cambodians are loading up on beer in case the Kingdom follows the lead of Thailand, which banned alcohol this year. Partying is a big part of New Year, which is celebrated in several Southeast Asian nations this week.

One problem was that most of my Cambodian friends, like many others, had already left Phnom Penh in anticipation of such a declaration. The exodus was underway a week ago.

What about the religious components of the New Year, events that bring people into close proximity at wats? The government has not closed wats to the public, but meetings with many individuals have been declared off limits. This is in contrast to a special nationwide “battle cry event against coronavirus” a few weeks ago, which brought people together in wats to beat drums and chant prayers to bless all Cambodians.

In Thailand, which also celebrates New Year at this time, the government has banned all sales of alcohol. Indeed, “adult play” is a critical component of the New Year. Whereas ropes and nuts and clay pots are essential elements of the games children play, alcohol is apparently a crucial element to the “games” adults play. Cambodia didn’t follow Thailand in this step.

Official declarations. Travel restrictions. Wat admittance. Party “necessities.” These visible manifestations of a holiday don’t actually reveal what the holiday is really about.

END_OF_DOCUMENT_TOKEN_TO_BE_REPLACED 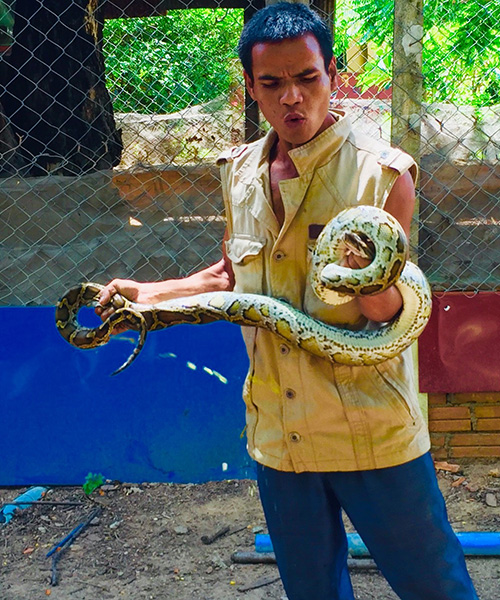 At Home of Hope, when a snake appears, a life-giving moment ensues.