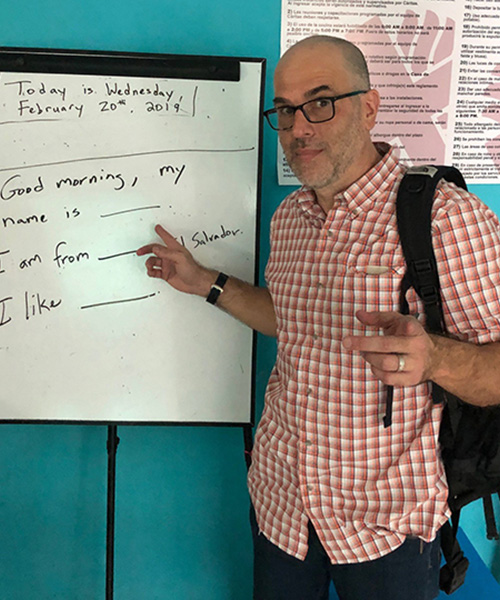 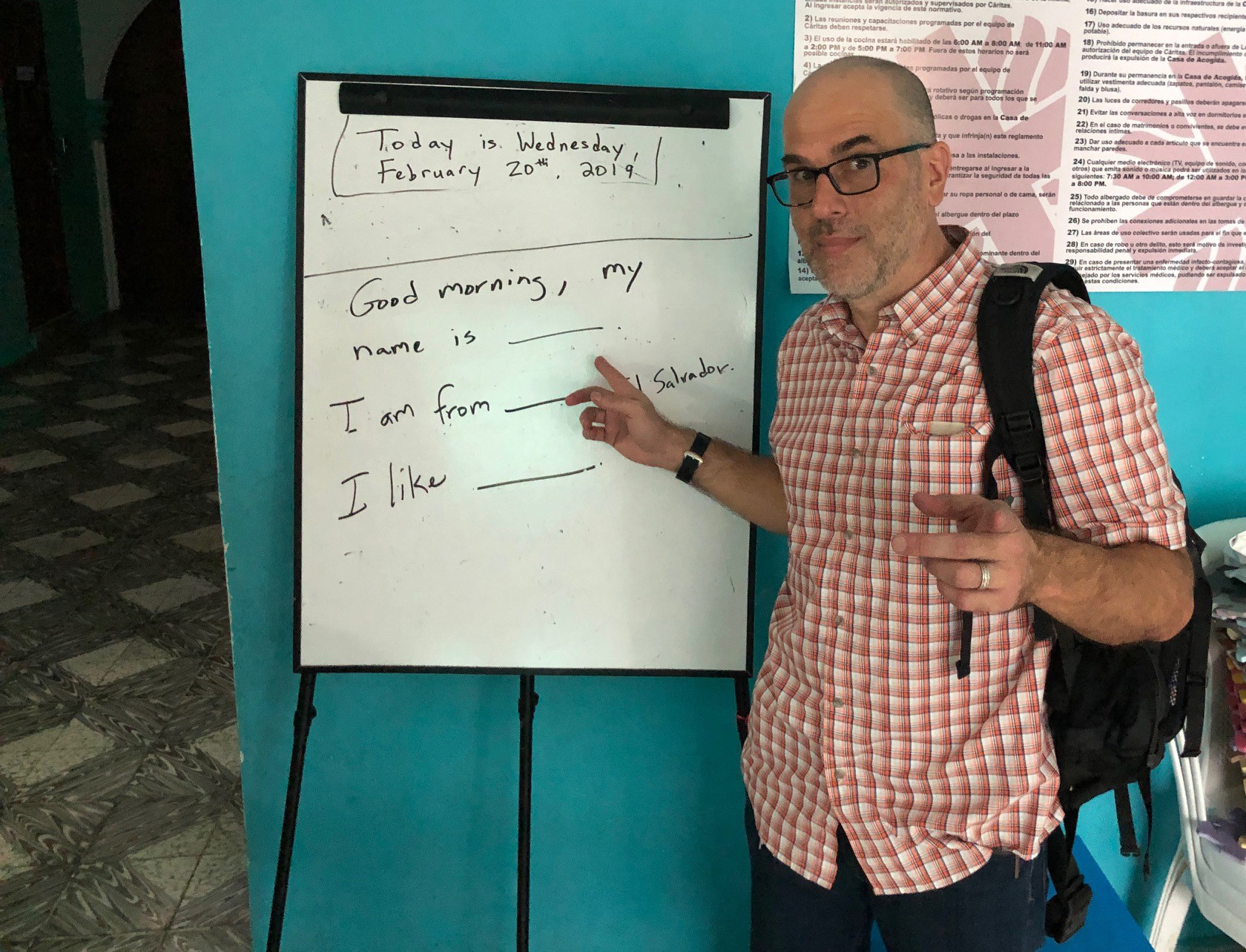 Nineteen-year-old Pablo has been in what he jokingly calls “this paradise” for 13 months. Together with his father, his 12-year-old brother and currently seven other people, he lives in a secret church-run shelter outside of San Salvador. Except for a few appointments related to their asylum applications, they have not left the house, gone onto the flat roof or even looked out a window.

Pablo softly plays the guitar for today’s visitors, as, together with his family, he leads the others in singing a favorite church hymn. They are careful not to be too loud, and Pablo has been hiding the guitar under his bed so it won’t get confiscated.

“In some ways it is worse than prison,” he says. “In prison you are allowed to go outside for at least some time of the day, but here we cannot.”

Pablo’s mother was brutally murdered by gang members, and he and his family were threatened. To save their lives, his father, Rafael, decided that the family had no choice but to flee. He paid a friend, who promised to take them to the United States. But when they got to Mexico, more money was demanded—money they did not have.

The Mexican immigration authorities put them in touch with the Salvadoran Catholic Church, which, after screening them, gave them a room in the house in El Salvador, which is part of a network of church-run shelters.

The rest of this unique community is made up of Elena, whose husband was also murdered by a gang and who is here with her two daughters and one son; Marco and Daniel, a gay couple; and Silvia, a transgender woman.

Cooped up in the house, they find life monotonous, but several times a week they look forward to a visit from Peter Altman, a Maryknoll lay missioner. 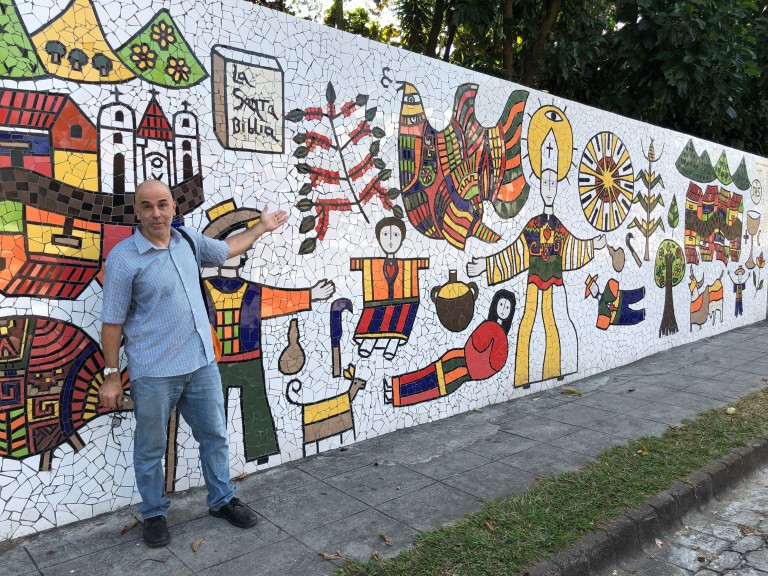 Maryknoll lay missioner Peter Altman stops at a mural to martyred St. Oscar Romero on the grounds of Divine Providence Hospital, near the chapel where the archbishop was slain 40 years ago in San Salvador.

“When Pedro comes, he brings joy and happiness,” says Rafael. Altman teaches them some English, helps the children with math and other studies, leads art projects and plays games with them.

“I’ve taught Salvadorans how to play Uno, Yahtze, pick-up sticks, Sorry!, Bingo and a variety of card games,” says Altman, “anything to help break up the monotony.”

Altman, who also serves as the regional director for Maryknoll Lay Missioners’ El Salvador region, works in two shelters that are part of a network established by the Church to serve internally displaced people.

According to a U.N. human rights report issued last year, “El Salvador is experiencing an epidemic of generalized, gang-related violence, with homicide levels above most conflict-affected countries. As a consequence …, there are extremely high levels of internal displacement.” The report faults the Salvadoran government for not acknowledging the problem and for failing to provide protective measures and a durable solution to the crisis.

The Geneva-based Internal Displacement Monitoring Centre estimates that in 2017 alone almost 300,000 Salvadorans (5 percent of the population) were newly internally displaced—almost all of them forced to flee from their homes because of the violence that is so endemic to the country.

“They have had to pick up the few possessions that they could grab and leave their homes because of threats of violence,” says Altman.

The shelter provides a safe place for them to live while they go through the application process for legal status in the United States or another country. “When they come here, they have absolutely nothing, most often just the clothes on their backs,” he says. “The idea is to give them a supportive environment in which to stay while the legal processes play out.”

Although they grumble a bit about strict house rules and having to stay indoors 24/7, Pablo and the others count themselves blessed. Having been screened and admitted to the shelter means that they have a good chance of eventually getting their asylum applications approved. 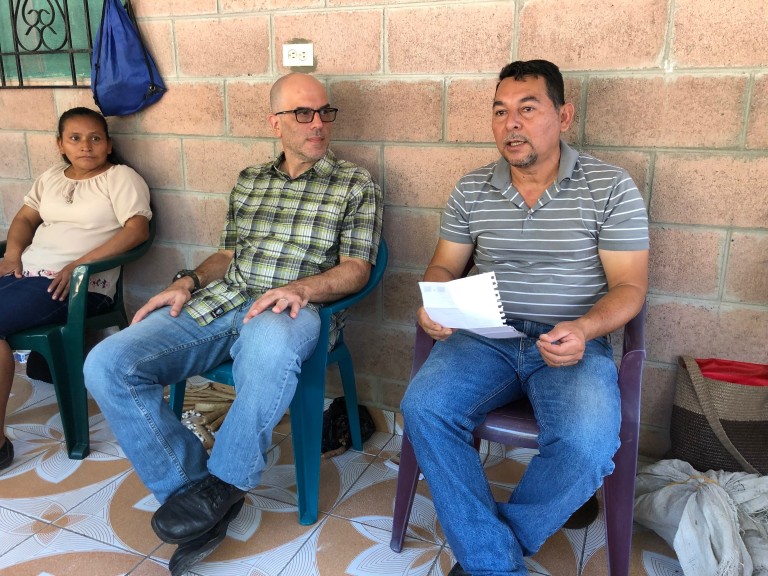 “Most of them have everything they need to win legal entry into the United States or into another country,” Altman says. “The challenge is that for every family that’s in our shelter, there are 200 families like them who are displaced and don’t have the resources, for one reason or another, to go through the process. Maybe they lack some of the documentation, police reports or other documents to corroborate their stories.”

After having lived and worked with poor people in El Salvador for more than five years, Altman says that one thing he knows is that “Salvadorans love El Salvador. In a perfect world, they would want to live, work and raise their families in El Salvador. When I see stories on the news about Salvadorans immigrating to the United States, it is very clear to me that this isn’t just a quest for better economic opportunities. Most of the time, people have no choice to stay in their homes. They are running for their lives.”

According to Altman, the recent announcement by President Trump that his administration will cut off aid to El Salvador and its neighbors Honduras and Guatemala has increased anxiety in the country, “A lot of people I speak to here—both Salvadorans and foreigners—are very concerned,” he says. “Many of the programs that would be threatened are trying to repair the torn social fabric of El Salvador, which is one of the root causes of emigration.”

“If the current administration wants to sensibly address the problems at the border, “ Altman said, “the plan should be to increase aid and partner with El Salvador to improve the social and economic climate here. Given the opportunity to work and live safely here, the vast majority of those who are heading north would choose to stay.”

El Salvador has a special place in the hearts of Maryknollers. During the country’s civil war, Maryknoll Sisters Ita Ford and Maura Clarke and Cleveland missioners Ursuline Sister Dorothy Kazel and Lay Missioner Jean Donovan were martyred there, as was Archbishop Oscar Romero and many other church people. Currently Maryknoll Fathers John Spain and John Northrop minister here, as do nine Maryknoll lay missioners.

Murders, shootings, violence, extortion and threats are common in many of the communities where Maryknoll missioners work. In the days preceding a recent visit by this reporter to Maryknoll sites in El Salvador, several of the communities had experienced a murder, a mid-morning shootout between the police and a suspected gang member, and the disruption of public transportation due to an extortion demand directed at the bus company.

Altman says that in addition to welcoming and embracing asylum seekers from El Salvador in the United States, another important way for U.S. Catholics to make a difference and show solidarity with the suffering people of El Salvador is to support what Maryknoll lay missioners in El Salvador are doing in the country.

“They are engaged in educational programs with at-risk youth,” he says, “in programs with small farmers in the countryside, providing educational assistance in urban areas, working with women’s cooperatives and nutritional programs, and reaching out to people who are homeless—including a significant number of Salvadorans who have been deported from the U.S.”

“Our missioners,” he says, “are helping to create a better future and more opportunities for people here in El Salvador.”

All names of shelter residents have been changed to protect their identities.

View a video on Maryknoll missioners in El Salvador.

This article originally appeared in the May/June 2019 issue of Maryknoll magazine.