The spirit of Father Rutilio Grande lives on

The legacy of the first martyrs of El Salvador’s civil war — Father Rutilio Grande and the two lay leaders who died with him — continues to inspire people today. 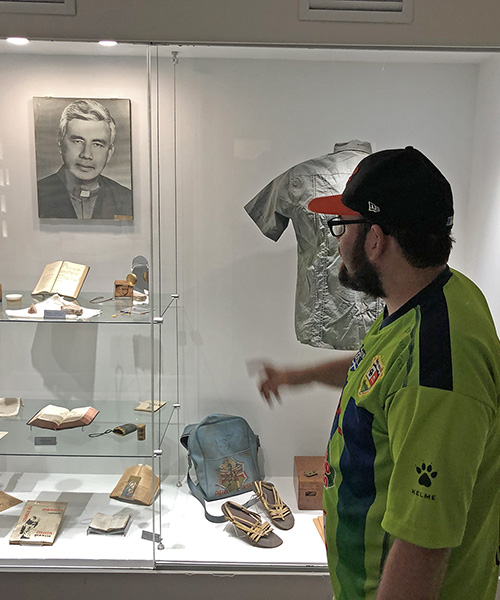 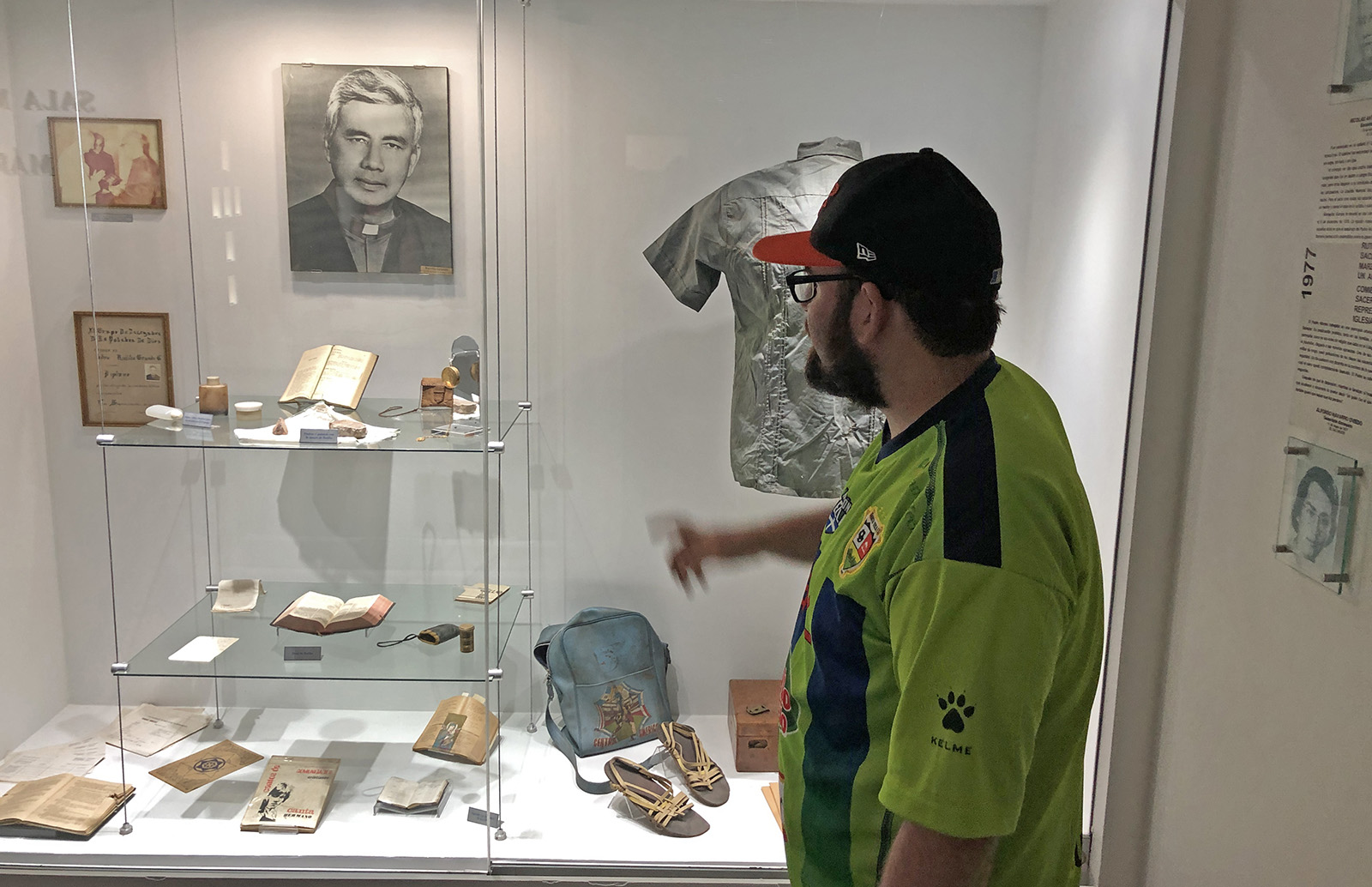 Larry Parr explains an exhibit about Father Rutilio Grande at the Jesuit University of Central America in San Salvador. (2019 photo by Meinrad Scherer-Emunds)

This Saturday, El Salvador will be celebrating the beatification of Jesuit Father Rutilio Grande; Nelson Rutilio Lemus and Manuel Solórzano, who were parishioners at Father Grande’s parish and who were brutally murdered alongside of him; as well as Franciscan martyr Father Cosme Spessotto.

All four were killed because of their commitment to following the mission of Jesus to work with poor and marginalized communities and create a world full of love and justice. Before and during the armed conflict in El Salvador (1979-1992), clergy, religious and thousands of lay leaders were killed because they lived out their faith by denouncing injustice and working for the reign of God.

This beatification has a special meaning for the Salvadoran people, as these four will be the first martyrs to be beatified after the 2018 canonization of St. Óscar Romero. This continues the process of acknowledging the suffering and crucifixion of Salvadoran people in the 70s and 80s. It also brings world attention to those that gave their lives for the reign of God and brings hope to those in El Salvador who are still struggling every day for dignity, justice and peace.

Rutilio Grande has a special place in the hearts of the people. He was born in Paisnal, a small town near Aguilares in the north of the department of San Salvador, and, after studying in Europe, returned to be the pastor of the same area. His call was lived out by entering into daily life with those that were suffering on the margins of society. Inspired by the Second Vatican Council and the Latin American bishops’ conference in Medellín, he empowered laypeople to be active leaders in the church and to reflect on what the Bible can teach them about their own reality.

This included organizing small Christian base communities that helped the spirit to become alive in the struggle of the people as well inspiring local parish members to become lay missioners and work to transform their reality. This message of liberation as well as his commitment to the defense of the rights of the poor led to him and his team being considered a threat by those in power. Father Grande was gunned down by a death squad because of the hope he had inspired for the creation of a more just world, starting from the bottom.

As the first priest killed in the lead-up to the civil war, he remains an important symbol of hope and struggle for the people. He was also known for his deep friendship with St. Óscar Romero and became inspiration for many of the Salvadoran martyrs that gave their lives following the mission of Jesus.

Today Father Grande’s legacy can be seen in a number of base communities and local groups that are named after him and continue his work of creating a more just El Salvador from the margins. He is seen as part of the crucified people who were murdered because they denounced the societal sin that persecutes those at the margins. His martyrdom also gives people hope that the church will stand on the side of those that are suffering and denounce injustice and violence, which remain a central problem in El Salvador.

It is also very meaningful that Nelson Lemus (who was only 15 years old) and Manuel Solórzano (age 72) will be beatified together with Padre Grande. They were both active lay parishioners who believed and lived out the mission of Jesus.

Rutilio Grande famously said that everyone is welcome to the banquet and Jesus will be at the middle of table. Everyone has a role in the mission to create the kingdom. Nelson and Manuel believed in this message and were a part of the local commitment to create a more just and inclusive reality for their community. Like so many other lay Catholics in El Salvador, they were persecuted for living out this missioner call.

The spirits of Nelson and Manuel still live on in the communities that continue the struggle for dignity and peace. Many people currently living at the margins of El Salvador can relate to their lives and suffering. Their inclusion in this process represents all of the many unnamed lay Catholics that suffered and were crucified by those in power.

Jesus stands together will all those suffering because of the sins and violence of our world. It is meaningful that the church is recognizing the victims of this injustice as martyrs who gave their life for the reign of God. In this way, not only are Nelson and Manuel being beatified but the church is acknowledging the holiness of the entire crucified people of El Salvador. They are the first lay Salvadorans to be beatified and demonstrate the importance of laity in constructing the reign of God. They represent the hope that love can conquer sin and that a more just world full of dignity, respect and love is possible.