A new missioner’s reflection on dignified housing and the value of hope he had taken for granted. 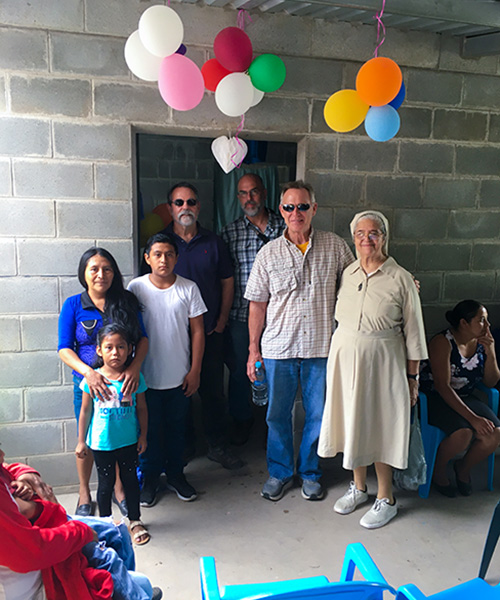 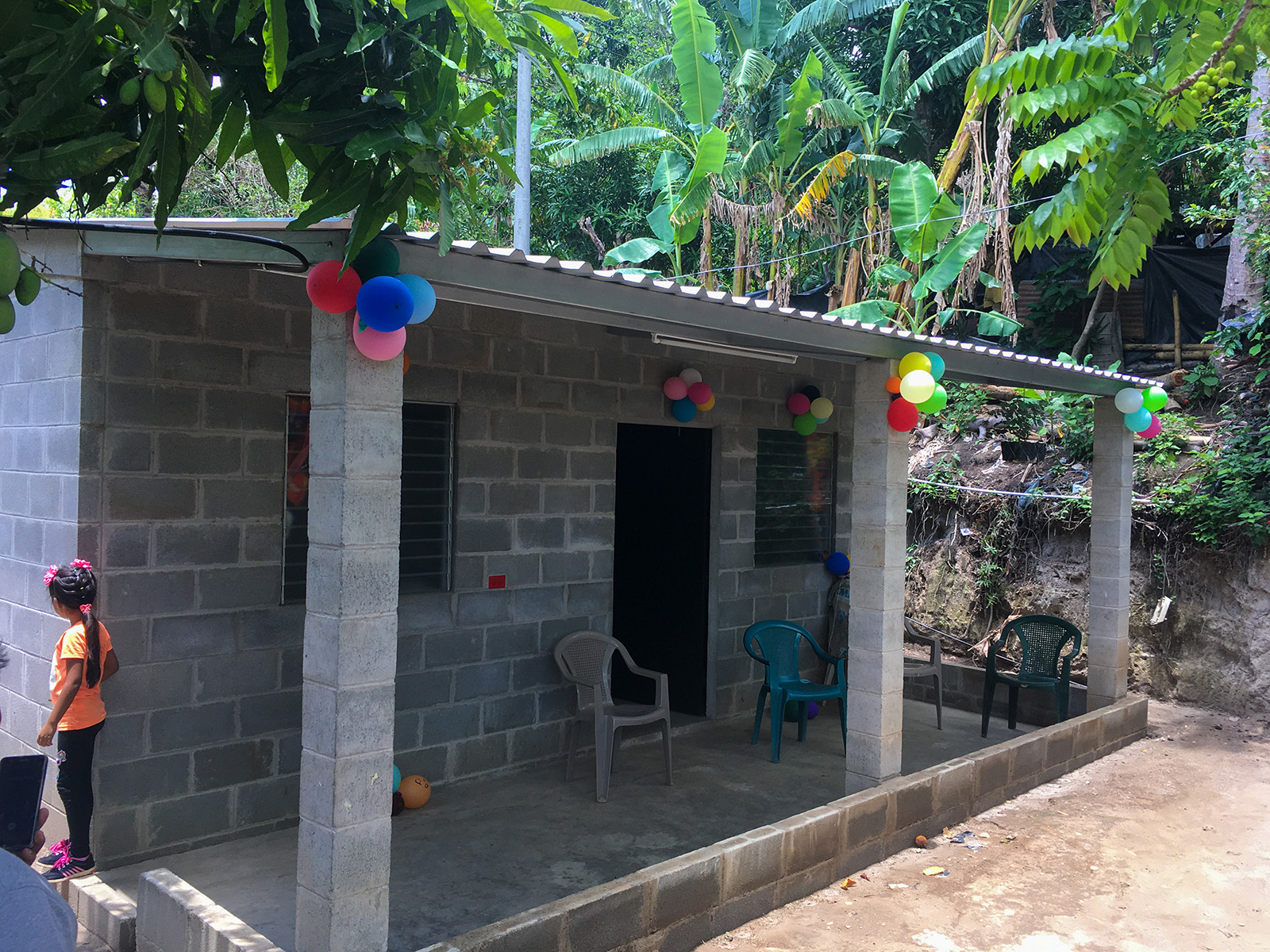 This finished, new house for a family in El Cedro is about to be blessed. These houses are built with deep foundations and steel reinforcement to protect against earthquake damage.

On the front porch of her small concrete-block house, surrounded by Salvadoran jungle and adobe structures, a mother of three and her two high-school-aged kids talk with two U.S. donors and me — with some translation help from Pete Altman, a fellow Maryknoll lay missioner. She and her kids seem happy. They smile and laugh with us as we sit on small plastic stools or brightly colored chairs made out of strands of rubber wire wrapped around a metal frame.

The family received their house 14 years ago through a dignified housing project of the Vincentian Center Casa del Cipote, which is also supported by Maryknoll Lay Missioners. To the right of the house, a small wood stove, made out of the rim of an old car wheel, smolders. 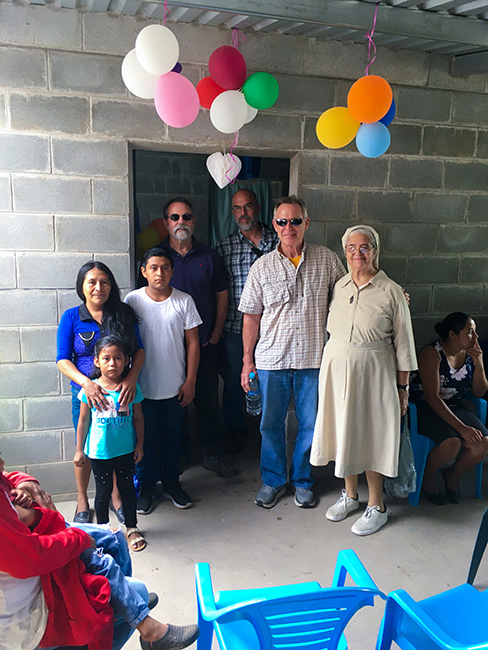 Both of the children on the porch are studying at bachillerato (the Salvadoran high school equivalent), which is not that common in this rural community of El Cedro. The oldest child isn’t present because she commutes into the capital every day to attend university. She’s studying to be a nurse and occasionally writes emails to one of the donors to practice her English.

After some more conversation, we leave and get into the pick-up truck that brought us there through patchy dirt roads. Once in the car, Sor Ana-Rosa Morán, the Daughter of Charity who helps oversee the housing project and is deeply connected to the community, tells us that the family we just visited is quite poor. In fact, the small wood stove to the side of the house is their entire kitchen.

It surprised me. Since they qualified for the housing project, I knew they would have to be far from rich, but witnessing their positive spirit, I assumed that they had to be doing better financially than some of the other families we had visited that day. That wasn’t the case.

So what made them so joyful to be around? The answer is: hope.

I never used to think about hope much. At least not in the serious sense. Sure, throughout my adult life I would hope for unimportant things — the Steelers winning a football game or good weather on a certain day — or for important things — getting a job I had applied for or a student I worked with doing well on a test — but the idea of internal hope was rarely on my mind or a part of my prayers.

Truth be told, I rarely focused on this one of the three primary virtues that Paul mentions in 1 Corinthians 13:13 — faith, hope and love. Of these three, hope wasn’t necessarily missing, but it was forgotten. Perhaps more accurately, I had taken it for granted.

A few weeks ago, at the memorial event in the National Cathedral of El Salvador for the anniversary of the assassination of St. Óscar Romero, a human rights professor from the University of Central America said, “Sin esperanza, no hay derechos humanos,” or in English “Without hope, human rights do not exist.” 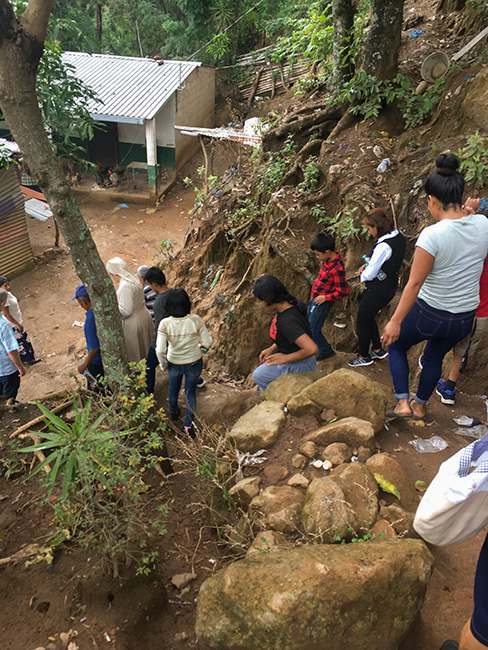 The members of the community walk down the steep trail to one of the new houses for a house blessing.

Homeboy Industries founder Jesuit Father Greg Boyle has tied gang violence to a “lethal absence of hope.” In El Salvador, where there are great inequalities and few opportunities for people to rise out of poverty — particularly in rural areas — gangs are common and powerful.

Hope is a virtue and can exist in the hearts and minds of anyone in any economic circumstance, but it is much more difficult to cultivate without the privileges of material resources, a good education, work opportunities and strong familial and/or community support. While faith has the ability to bring hope where these things are lacking, Christ teaches us that faith and hope also require actions — like feeding thousands and healing the hurting.

And so perhaps my lack of time spent thinking about hope wasn’t so much a failure of internal faith but instead a failure to share the hope I’ve never struggled to have by reaching out to marginalized communities.

Now a few months into my time as a missioner, I am beginning to think that this is one of our primary goals: to share the privileges that allow hope to flourish with those who have been left in hopeless situations. It is when we see hope as something to share that we can turn it from a solely internal virtue to something external, turning it into what Paul says is “the greatest of these”: love.

Later, during another visit to El Cedro, we met with a family who had just received a new house after years in a leaking, crumbling adobe shack. The mother of the family shared their previous reality: That in their old house, every time it rained, all of their things would get soaked. That her kids would often get sick. That simply maintaining livable conditions in their home was a daily struggle. That sometimes she couldn’t send her kids to school because they didn’t have any dry clothes to wear.

Now in their new house — thanks to the generosity of donors and the hard work, dedication and love of the community — their things stay dry. School supplies that they can barely afford aren’t ruined by rain, and she and her children have more time, energy, health and effort to focus on things like education or improving their financial situation.

Now their rights to education, land, work and food (all of which exist in the Salvadoran constitution in one form or another) begin to exist in practice, and hope can flourish.

As I write this, I have begun to work in this same community, including teaching English to the same kids I was talking to on the porch next to the small wood stove.

I find myself thinking about hope a whole lot more.

END_OF_DOCUMENT_TOKEN_TO_BE_REPLACED 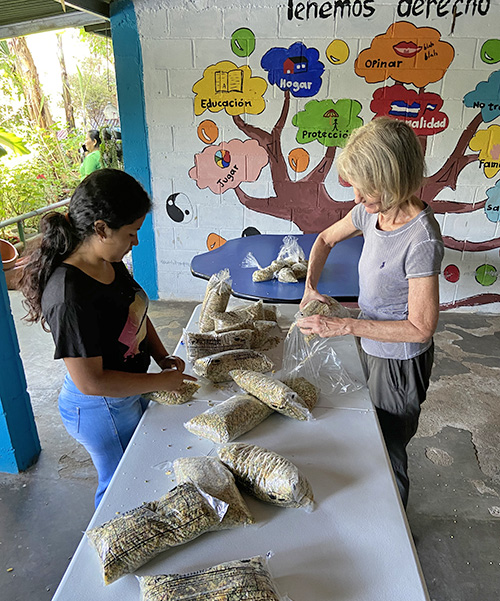