Written by Caitlin Reichelderfer “I have two dresses. One is blue and the END_OF_DOCUMENT_TOKEN_TO_BE_REPLACED

Written by Caitlin Reichelderfer
“I have two dresses. One is blue and the other is purple,” the 4-year-old girl announced to me excitedly as she took my hand and steered us through the chickens in her front yard to where her mother had placed seats in the shade.  As I followed her, I took in the sight in front of me: her family’s small one-room living area and adjacent dilapidated bathroom.  A bit surprisingly, they had their own running water, but it was in the form of a freestanding faucet located in the middle of the front yard.
I was visiting this house along with two of my co-workers–one a doctor, and the other a registered nurse like myself–from the Fundación San Lucas.  We were there to see her 6-year-old brother who we had been told by a local teacher had a “bad arm and leg.”  My main responsibilities with this foundation include being a part of a team that screens children in the surrounding communities of Cochabamba, Bolivia for potential disabilities, be those cognitive, behavioral or physical.  Often times these communities are rural and poor, where lack of resources and child malnourishment are prevalent.  Because of these factors, if a disability is discovered, other staff members from the foundation assist the child and his or her parents with making and attending any necessary diagnostic appointments, as well as helping to locate any necessary supportive therapies.  If the parents have no disposable income, the foundation covers all associated costs.
Josue, the brother, indeed did have left-sided weakness in both his arm and leg, making it difficult for him to use is left hand in daily tasks and causing him to slouch to the left when walking and sitting.  However, although he had more physical limitations than most children his age, there was nothing remotely “limited” in his vigor for life or his wicked sense of humor.  My co-workers and I spent the next 30 minutes gathering health history from his mother, performing our screening test on Josue, and discussing further needed steps in obtaining support for him, all the while laughing with all three family members about everything from the ridiculous squawk of one of their chickens to the fact that Josue’s sister kept reminding me (every five minutes or so) that after I was done “playing with” Josue–the term we use when screening kids–it was her turn.  A responsibility I of course happily performed.
As we said our good-byes at the front gate, I was struck by what according to United States standards should be unlikely–great joy and a wonderful vigor for life coupled with a lack of material wealth, and some might add physical wealth in light of Josue’s disability.  You’ve heard the story told a thousand times in a thousand different ways: the materially “poor” family who is incredibly “rich” in joy and spirit.  However, I think it’s different when you come face to face with such a strong living, breathing example.  Especially in light of what we were counseling the mother to do.  In order to get the needed support for her son she was going to have to give up every Saturday afternoon to take him to physical therapy as well as bring him to a smattering of necessary doctors appointments.  And although from a car-based US view point, this might not seem like a lot (just hop in the car and get ‘er done!), taking into account the availability and reliability of public transportation in the area (both not great), this was asking her to commit a large amount of her time (and patience) in order to complete these tasks.  And let’s not forget that she would be adding this to her already very full plate of being the main parent to do the food shopping, cooking, laundry washing, and general child rearing.  And not only was she willing to do all of this, she showed genuinely gratefulness for our guidance and maintained unconditional love for her child–never once displaying that his disability was in any way a nuisance.
Later that night as I ate dinner in my simple, yet by Bolivian standards, very nice apartment, I said a special prayer for both Josue’s family and myself.  For the former, I prayed for continued strength, resilience and joy.  And for the latter, I prayed that despite my comparatively large material wealth, I could also experience such joy and acceptance in the face of whatever “hardships” life had in store for me.

END_OF_DOCUMENT_TOKEN_TO_BE_REPLACED 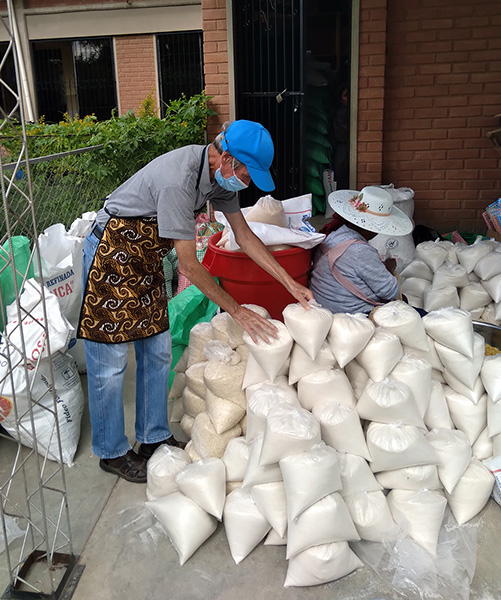