A Via Crucis of hope for El Salvador’s youth

Walking the Stations of the Cross in Santa Leonor and La Esperanza. 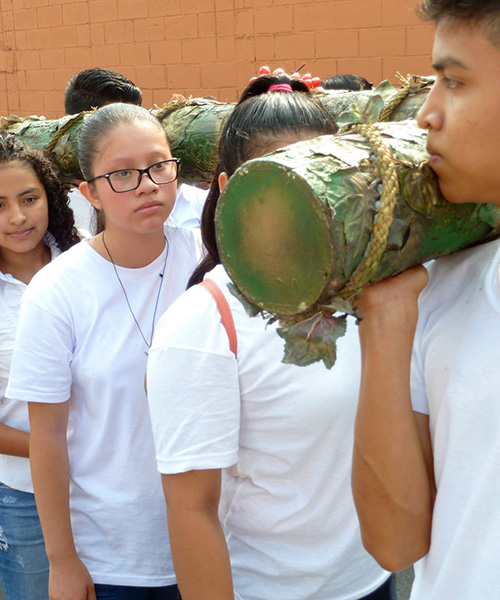 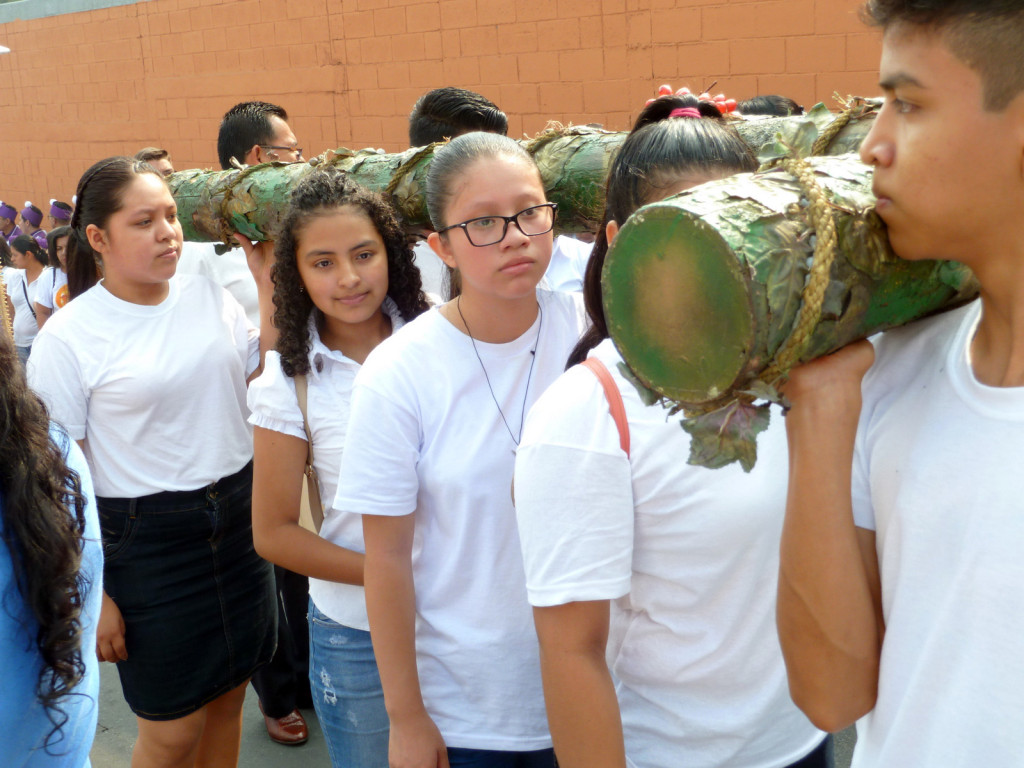 A dozen youth carry a giant wooden cross during the Good Friday procession in Cojutepeque. The cross they carry is heavy, but people step up to help bear it.

In front of her home, Iris, a single mother of two teenagers, assembles a small altar. On it, she places an image of Jesus with his hands tied, a candle, and bouquets of deep purple bougainvilleas. We are at the first Station of the Cross—Jesus is condemned to death—in the community of Santa Leonor. Every Friday of Lent, the communities of Santa Leonor and La Esperanza organize these Stations of the Cross. Today, April 5, the theme of our Via Crucis focuses on youth. We read Mark 15:1-15 and then meditate on how our young people are also condemned to death through lack of opportunities.

In the town of Cojutepeque, there is only one public high school for some 50,000 residents. Every year a thousand plus kids take the exam to enter the school, yet there’s only space for 400 new entries, which are given to students with the highest test scores. For those who don’t get in, their formal education is over, unless you can afford a private school. Few in La Esperanza or Santa Leonor can. Only 40 percent of Salvadorans have a high school education and according to the U.N. a country has to educate at least 60 percent of its people with a high school diploma to be on the road to development. Yet Sofia, a teen from La Esperanza who prepared the tenth station of our Via Crucis and is now studying at the Catholic University of Ilopango, is calling and encouraging other young women to believe in themselves and break this cycle of educational poverty.

After this meditation, we proceed down a steep hill along a wide gutter that trickles with a thread of water. We then turn right on a narrow street toward the second station—Jesus carries his cross. I see two young National Police officers on patrol. They move like mechanical prolongations of their M-16 rifles, helmets, and bulletproof vests. Then Diego, the 6-year-old boy carrying a small cross and wearing his Spiderman cap at the head of the procession, waves to them. One officer waves back and smiles. I’m reminded that they are human beings too. They also suffer in a vicious cycle of violence where the poor kill the poor. Yet there is hope. I think of two young men from La Esperanza who have recently left the gang. They have decided to risk everything to live a new conviction: working and helping their younger brothers and sisters stay in school.

We cross the bridge at El Piro Creek, where more pilgrims join the procession. The creek is the main receptor receiving the town’s sewage. Add to that the local slaughter house a half mile up stream and you get a mix of aguas negras and blood. Flies and mosquitoes abound and swarm into shanty homes leaving bacteria and germs where they may. Last year Luisa, also a mother of two teenagers, had an infection no antibiotic could stop. She died at the age of 40. 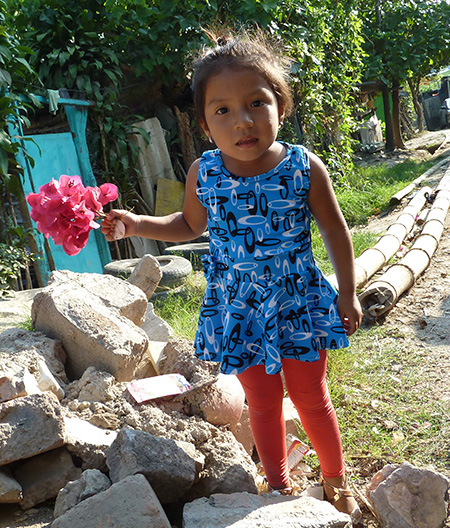 Just past the creek, we enter the community of La Esperanza. We are at Station Nine—Jesus falls for the third time. Here I remember David, Caesar, and José. My fondest memory of David is on a scorching day he called me over and gave me a coconut, complete with a neat hole drilled on top, ready to drink. It was delicious. Unfortunately, he fell into gang life and in February of 2017 disappeared never to be seen again.

José, not a gang member, also disappeared. I once asked him about his birthday, and he told me that no one ever remembered his birthday. “I never had a cake,” he said. I took note of that, but when June 21 rolled around, José’s birthday, all I could do was pray that he’d be found alive. To this day he hasn’t been found and according to El Salvador’s attorney general, there were over 3,300 disappeared persons (an average of nearly 10 people per day) and 3,600 homicides in 2018. The majority of these victims were between the ages of 16 and 30.

Caesar, a gang member, once borrowed a book from our library in La Esperanza. Gang members rarely come into the library, but Caesar borrowed Dive (Book One: The Discovery) by Gordon Korman, and another gang member, Rogelio, borrowed Enrique’s Journey by Sonia Narario. After months of not returning them, I asked Caesar about it. He said he’d do his best. “And can you look for Rogelio’s book too?” I asked. Rogelio was in prison now, so Caesar told me he’d do his best to find both books.

A week before Caesar was killed he was in the process of returning them. He took the books to Maria who lives next to the library; she offers that service when I’m not there. As he opened his backpack to give the books to her, two National Police officers suddenly appeared. Dropping the backpack, he bolted. There’s no way you catch Caesar when he runs; he flies, so the police didn’t even try, but they opened the backpack he left behind and searched it. “No weapons, only the two books,” Maria later told me. I had a hunch Caesar, 21, would keep his word: I’ll do my best. A week later two soldiers on patrol shot him dead. Caesar was a victim of El Mano Duro—the government’s “heavy hand” policy in dealing with gangs. His mistake that day: running when ordered to freeze.

We finish our Via Crucis two hours later in the small chapel of La Esperanza accompanied by 30 pilgrims. We meditate on Jesus being placed in the tomb and how our Via Crucis is memory and so much more. It is opening and new beginnings; it is Jesus’ real presence as our small Christian base communities reach out with literacy programs, environmental workshops, food and medicine for the indigent, and scholarships.

Then on Good Friday, the people of Santa Leonor and La Esperanza join 50 other communities from the parish of St. John the Baptist for one single Via Crucis through the hilly streets of Cojutepeque. “May our lives be a force of love for our youth, may we be examples to help them discover new life in Jesus’ Gospel,” Father Luis Coto intercedes, and then a dozen youth take up a giant wooden cross and move toward the first station. Just ahead of them is a float with Jesus carrying his cross; it takes 40 men to carry this float. Christ’s cross reaches into the sky; the cross the youth carry is heavy on their shoulders, close to the ground; yet several people step up to help bear it.

And then at Station Four—Jesus Meets his Mother—Father Luis asks us to find a mother and give her a hug. “Think about all the mothers whose children have disappeared or have been assassinated, and mothers that sacrifice everything for their families,” he says. I look for Iris whose oldest son is finishing his engineering degree; her youngest working to help support the family. I thank her for the strength and guidance she gives her sons. “That’s a blessing for all of us,” I tell her. And our Via Crucis continues flowing through the streets of Cojutepeque as living memory and hope.

Rick Dixon is a Maryknoll lay missioner working with base communities, literacy and youth development in the La Esperanza settlement of Cojutepeque, El Salvador.