Written by Maryknoll Lay Missioner Nancy Davies: They found them in chains . . END_OF_DOCUMENT_TOKEN_TO_BE_REPLACED

Written by Maryknoll Lay Missioner Nancy Davies:
They found them in chains . . .Sovan (fictional name) and another boy who was also deaf. They brought them here to our Deaf Development Program (DDP) in Phnom Penh, Cambodia where we give deaf students 15 years old and up sign language training as well as basic education and life skills. By all indications these two boys had been abused, traumatized and isolated for a long time. Often, in a remote village, people do not understand deafness. The deaf person is thought to be mentally deficient, possessed or being punished for some wrong doing of their own or their parents.
These two boys were given shelter here at DDP. They did not know their names or where they came from nor did they have any way to communicate. It was difficult to get close to them as they would cower upon your approach. They were not able to join in regular classes with other students so they were taught one-on-one with a teacher. Even this was difficult for them and one young man could not settle in to the routine. He eventually ran away.
But one stayed and progressed. Sovan was able to learn some sign language and became somewhat comfortable around others and his new environment. However, some chains were still binding him as was evidenced by his being withdrawn and distant.
At our Deaf Community Center our staff discovered that Sovan likes to draw. He is often seen sitting at a table with colored pencils and paper. On one of my visits there I sat next to him and asked (in sign language) what he likes to draw. He just gave me a vacant look and turned back to his drawing. This is how it went for many of my attempts to communicate with him . . .
. . . Until we celebrated Deaf Week in September. The first day we had an opening ceremony and many displays around our building showing pictures of our teachers, our football team, our students and other staff members. As I was looking at pictures of the students, Sovan came up next to me and joyfully pointed out himself signing in a classroom. He was absolutely glowing, a big smile on his face and his eyes sparkling. I had never seen him so animated! He proceeded to point out to me each picture on the wall of the classroom and then showed me the correct sign for each. I told him how well he was doing and that I was proud of him.
They say recognition is very important for our deaf students. They have never been recognized for anything in their entire lives. Sovan continued the day in high spirits, trying to get into every photo that was taken and doing a lot of smiling. We do not know what his future holds but he has definitely broken the chains.

END_OF_DOCUMENT_TOKEN_TO_BE_REPLACED 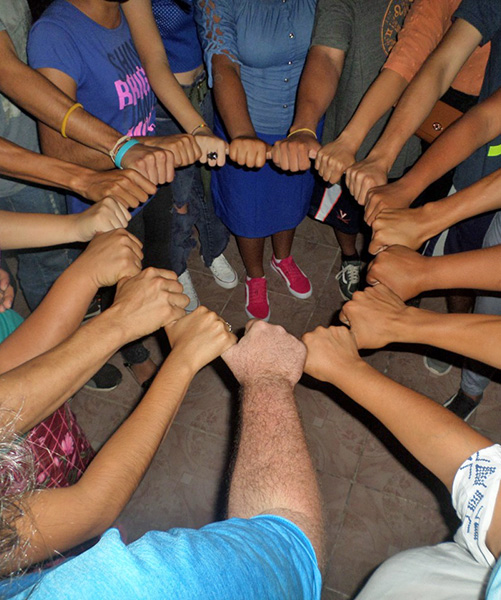