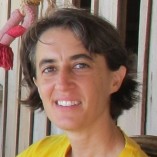 Maria is a philosophy instructor and teaches undergraduates critical thinking at the Royal University of Phnom Penh. It is the only institution of higher learning to take scholarship students and is a place from which tomorrow’s leaders are emerging.

In Cambodia, material poverty is matched by a dearth of educated citizens. It is said that 90% of the educated were killed by the ravages of the Khmer Rouge, the ruling party of the late 1970s led by Pol Pot, who eliminated a quarter of the population; the others left the country. Cambodian business associations and international agencies identified a lack of critical thinking skills as a significant issue. Maria believes critical thinking is important to create a productive work force and successful Cambodian development path.

“The ability to think critically,” Maria says, “to ask questions, to be reflective about oneself and others – this ability is an essential tool for students to learn to be intentional about how they want to be in the world and about what they want that world to be. Cambodia’s youth, 60% of the population, need this more than ever.”

Maria is from Atlanta, GA. She has a Master of Arts in Neurophilosophy and worked in software engineering and management at American Public Media Minnesota Public Radio. As a Jesuit Volunteer, she taught Mathematics in Portland, Oregon. She hopes to realize her call to mission and service, “A call shared by every child of God,” she says.