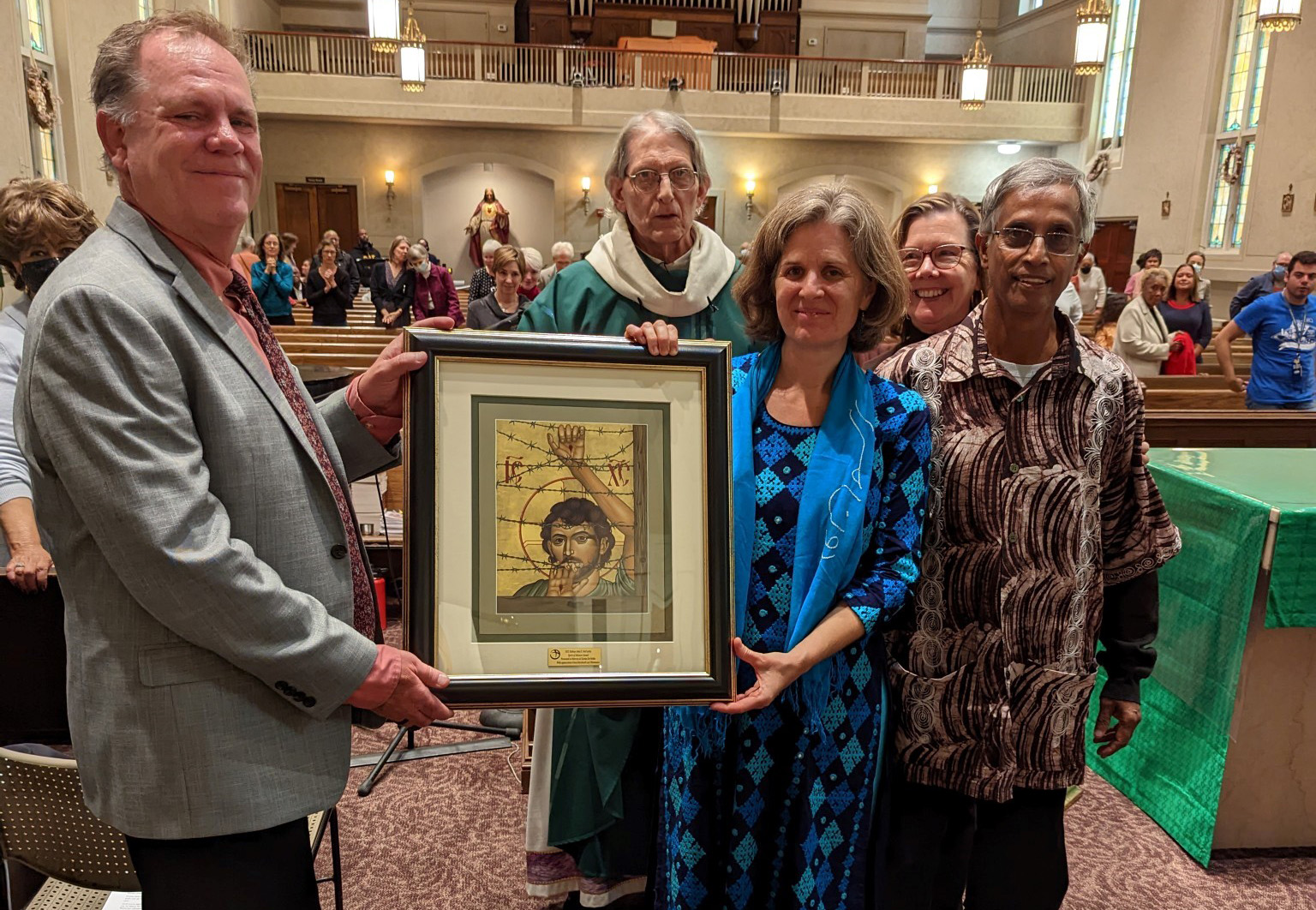 On World Mission Sunday, Oct. 23, 2022, Maryknoll Lay Missioners honored Merwyn and Kirstin De Mello with its 2022 Bishop John E. McCarthy Spirit of Mission Award. Throughout their lives — serving with Maryknoll Lay Missioners as well as subsequently with a wide range of faith-based U.S. and international organizations — the De Mellos have dedicated themselves to international and intercultural peacebuilding and justice service. They were honored for their untiring compassionate and transformative service, accompaniment and activism with marginalized people in Africa, Asia and the United States. 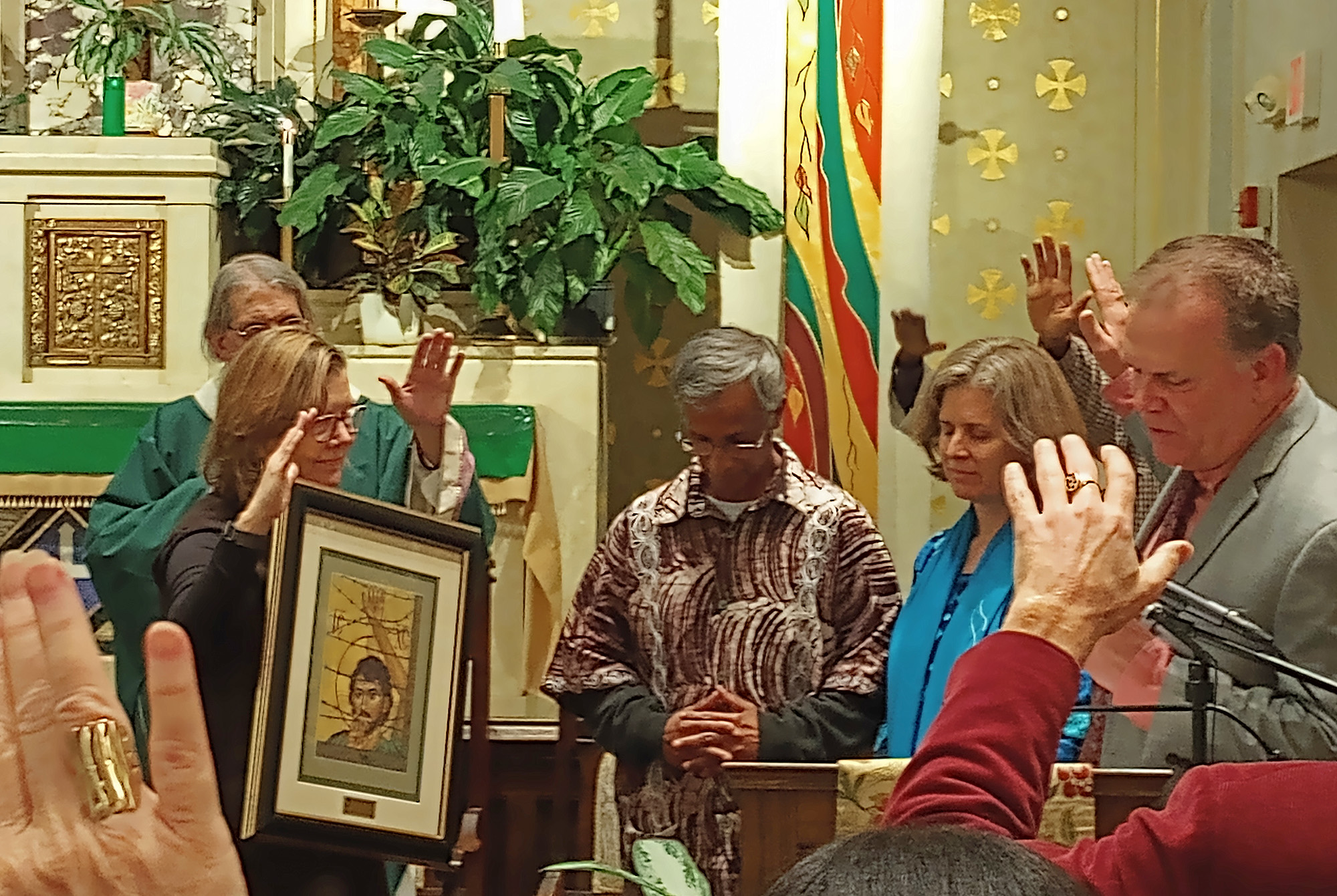 Merwyn and Kirstin De Mello receive a blessing during the Oct. 23 presentation of the award (Photo by Susan Gunn).

This year’s Bishop McCarthy Award was presented on Oct. 23 during the 9:30 a.m. Mass at Holy Redeemer Church in Washington, D.C., where they are parishioners. The award is conferred annually for continued justice and mission service after missioners have returned to the United States. The Mass and award presentation was livestreamed by Holy Redeemer Parish and can be viewed on the parish’s YouTube page (with the award presentation beginning at 1:58:35).

Maryknoll Lay Missioners’ executive director, Ted Miles and Mary Novak, executive director of NETWORK Lobby for Catholic Social Justice and a close friend of the De Mellos, presented the award. In her introduction, Mary said Merwyn and Kirstin were “reflective peacebuilders in every sense of the word.” Ted Miles told the De Mellos that the award was a small “thank you for your untiring compassionate and transformative service, accompaniment and activism with marginalized people in Africa, Asia, the United States and throughout the world.”

Debbie Northern, a Maryknoll lay missioner who served in Tanzania and New York with Merwyn, said, “Merwyn and Kirstin exemplify a mission life, going to places of conflict to witness peace and understanding. They don’t just talk about peace, but live lives devoted to bringing about peace in their own lives and in community.” Referring to the De Mellos’ continuing involvement in forming new missioners during Maryknoll Lay Missioners’ extensive annual orientation program, Debbie adds, “Sharing their knowledge and experience with our mission candidates and the wider Maryknoll communities has been a real gift and has helped us learn new skills in peacebuilding and openness to others.”

After returning from overseas mission service, Merwyn says, the two were in a sense, as the Jesuit Volunteer Corps slogan puts it, “ruined for life.” “I realized that coming back to the U.S., after all those years of service, I really could not live, and this is very personal, a ‘normal life,’ where I would come back, look for a well-paying job and buy a house. Kirstin felt the same way.” 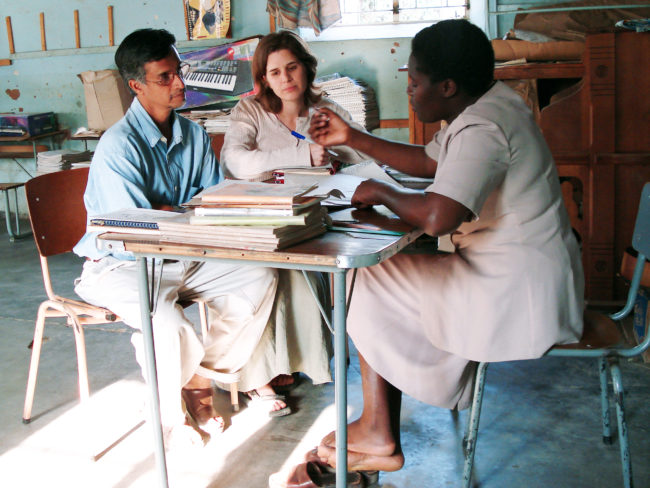 Merwyn and Kirstin De Mello receive a Shona language class at a parish in Zimbabwe.

Kirstin adds that “being affiliated with Maryknoll Lay Missioners when we were living in Zimbabwe and just being newly married to a Maryknoll lay missioner and learning more about the ethos and the charism of the lay missioners and of Maryknoll in general … [helped] my heart attune more to the human stories, to the complexity of people’s lives, and especially how people may be suffering or experiencing different forms of violence in their lives. It’s been a rich experience for me to have the privilege of walking alongside people in those kinds of situations.”

Born in Kenya of Indian descent, Merwyn De Mello’s family moved back to India when he was 13 years old. He is an Indian citizen with permanent residency in the United States.

He began serving with Maryknoll Lay Missioners in 1994, first in Japan and then in Tanzania. In Japan he was part of a platform of Japanese lawyers and Burmese activists that supported primarily Burmese asylum seekers, and in Tanzania he worked in refugee camps for Burundians fleeing the violence in their country. He also developed community education programs on advocacy and peacebuilding.

Merwyn returned to the States in 2003 to pursue a master’s degree in conflict transformation and peacebuilding at the Center for Justice and Peacebuilding (CJP) at Eastern Mennonite University in Virginia. It was at CJP that he met Kirstin. “Having grown up Quaker in a military town, Virginia Beach, I was raised with a strong commitment to peace,” Kirstin says, and they quickly recognized each other as kindred spirits.

They married in 2006 and served together with Maryknoll Lay Missioners in Zimbabwe until 2009. Kirstin’s work in Zimbabwe included facilitating workshops on dialogue for universities and helping to establish a national peacebuilding network. Merwyn designed and taught courses in transitional justice and trauma healing and peacebuilding, and provided coordination for peacebuilding strategy development in Harare and Mutare, Zimbabwe.

Since returning from Zimbabwe in 2008 — and Merwyn’s subsequent recruitment and orientation work for Maryknoll Lay Missioners — the couple moved to Chicago, where they served together with Community Peacemaker Teams (formerly Christian Peacemaker Teams) and participated in community-based restorative justice processes. 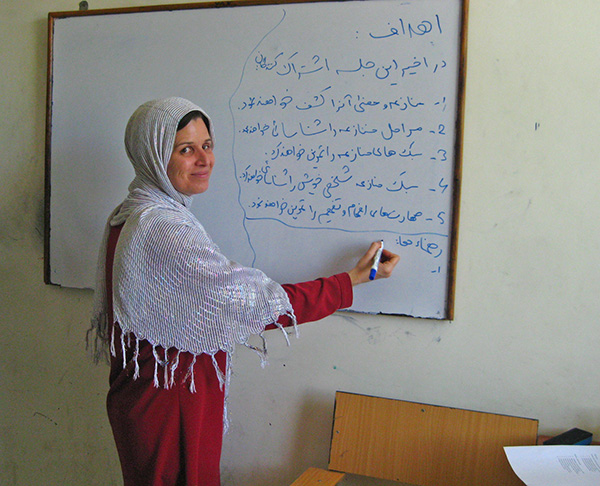 Kirstin writes on the board during a conflict resolution training for ophthalmic technician students in Kabul, Afghanistan in 2016.

After a few years, they decided to follow their desire to serve overseas again. “We felt that our passion for overseas service was not over yet,” Merwyn says. “When Afghanistan came up as a possibility, we were drawn towards it.” Merwyn had previously lived in countries where Muslims are in a minority — in Kenya, India, Tanzania, and he and Kirstin were drawn to the possibility of serving in a peacebuilding capacity in a Muslim-majority country.

They arrived in Kabul in 2014 as volunteers with the Mennonite Central Committee (MCC) assigned as peace advisors to a project of an MCC partner. In a country steeped within decades-old violent conflict, they worked in a team with their Afghan colleagues, focusing, among other things, on organizational conflict resolution, trauma awareness and resilience and aspects of restorative justice such as peace circles. They worked there until 2017, transitioning then to Bangladesh where they served until 2020, also as peace advisors to MCC projects.

Now back in the United States, Merwyn and Kirstin still serve migrants, refugees and low-income housing residents as they continue to work and advocate for peace and justice.

Motivated by his continuing love and concern for the Afghan people, Merwyn has been using his Dari language capacity and his familiarity with the Afghan culture in assisting Afghan refugees. He also helps welcome and serve the migrants that Texas and Arizona have been bussing to Washington, DC over the past few months, and he works with and trains the leadership of the tenants association at the Cider Mill housing project in community organizing and capacity building. 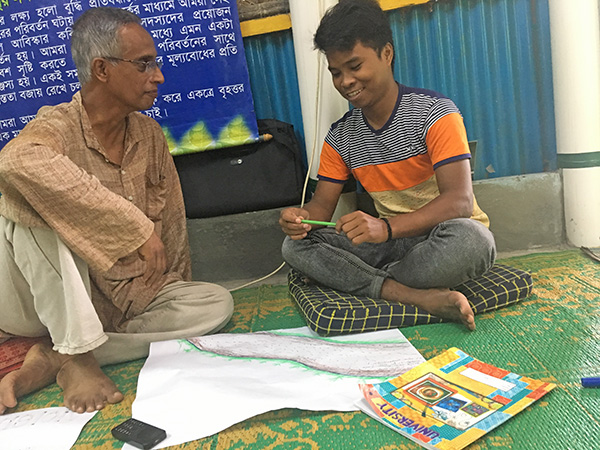 Merwyn listens as a L’Arche volunteer shares his river of life. Kirstin and Merwyn facilitated several sessions on trauma awareness for L’Arche volunteers in Mymensingh, Bangladesh in 2019.

Kirstin serves as the program and communications coordinator for MCC U.S. National Peace & Justice Ministries, where she supports advocacy and education initiatives on racial justice, immigration, climate change and peacebuilding. Kirstin, who began to grow vegetables when served overseas, now continues to devote some of her energy to growing vegetables and native plants in community gardens at the Dorothy Day Catholic Worker, MCC Washington office and Wangari Gardens.

The couple lives in the Assisi Community in Washington, DC, an intentional Catholic community of lay and religious men and women who are dedicated to Franciscan values, a simple lifestyle and social change. Merwyn and Kirstin are living below the federal income threshold “so that none of our money goes to war making or to fund the military,” Merwyn says.

The award, now in its fourth year, is named after the late Bishop John E. McCarthy of Austin, Texas. Known for his social justice and advocacy work, he was dedicated to promoting the role of laity in the church and Catholic Social Teaching. An indefatigable promoter of mission and an ardent supporter of Maryknoll Lay Missioners, Bishop McCarthy also was a strong advocate for the rights and dignity of migrants and refugees.

Portions of this article were adapted from a Maryknoll magazine piece by returned Maryknoll lay missioner Lynn Monahan.