Today’s Maryknoll presence at the U.S.-Mexico border continues the legacy of hope built by a previous team that worked there from 1995 until 2009. 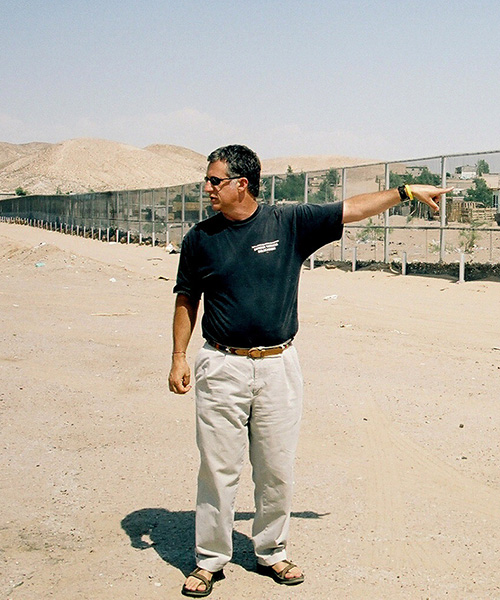 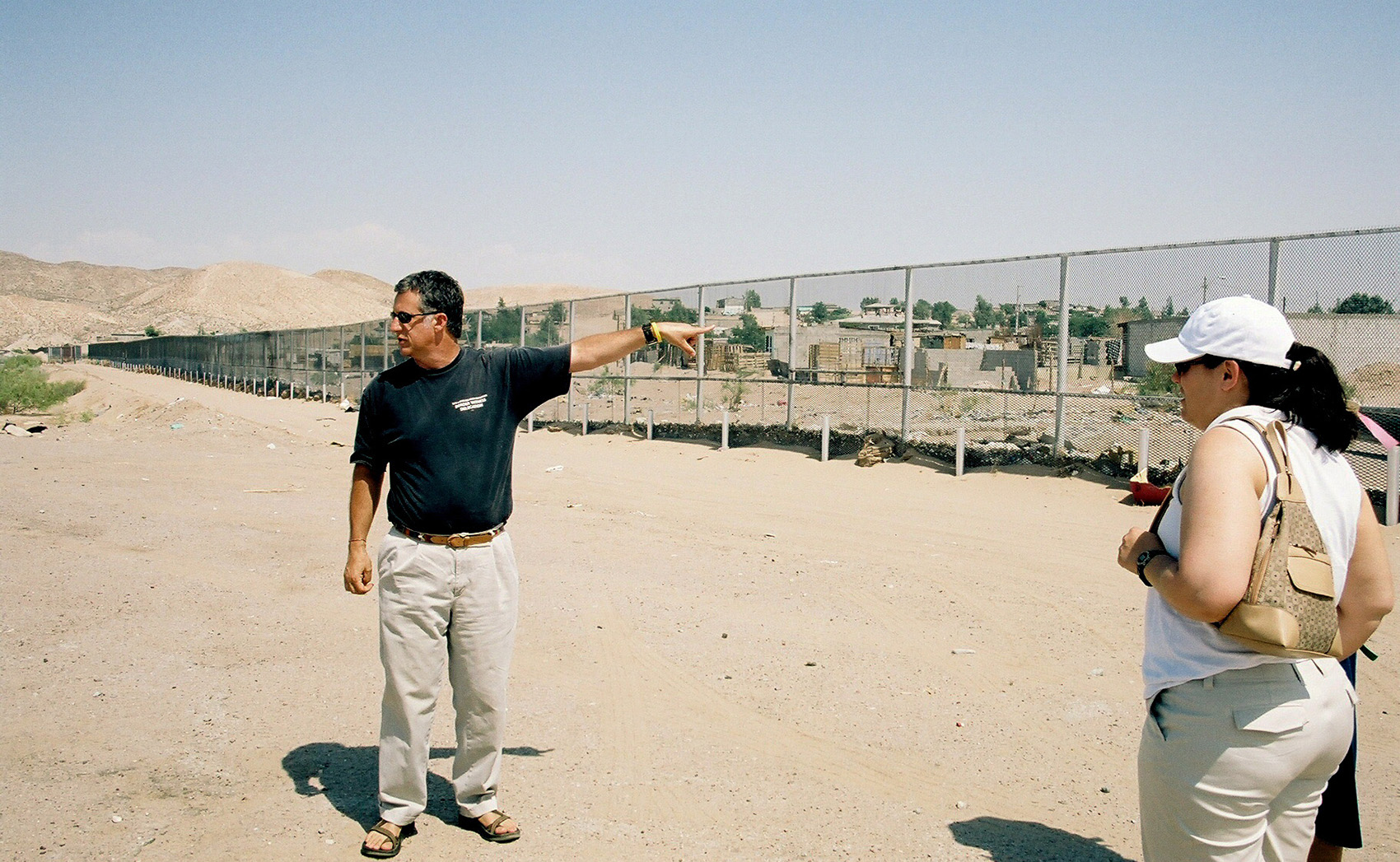 West Cosgrove in 2006 at the border fence, leading a group of university students during an immersion trip. Before building solid walls, the U.S. government erected fences like these.

My family and I were members of the largest Maryknoll Lay Missioners class in 1985 — 31 people, including 10 children. My wife, Chris, our children Sara and Maura and I lived and worked in Venezuela for seven very good years. Our third child, Julia, was born in Venezuela.

After returning to the United States, we began to work with the Maryknoll Society Development House in Houston and were sent to live and work in Las Cruces, New Mexico, to do mission education in that area of the Southwest. Las Cruces is just 45 minutes up the road from El Paso, Texas, on the U.S.-Mexico border. 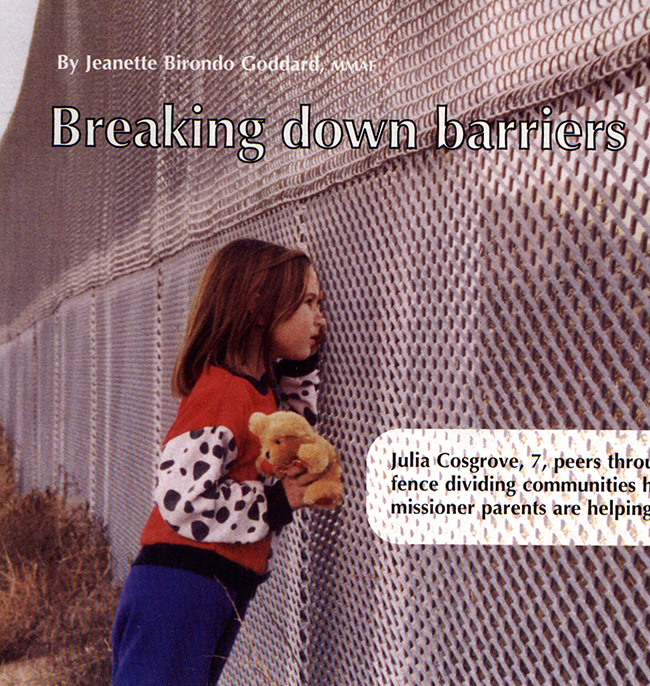 After two years in the area, we proposed to the leadership of the Maryknoll Mission Association of the Faithful that we begin a new project on the U.S.-Mexico border. The significance of the border was growing. The North American Free Trade Agreement had gone into effect a year earlier and was bringing hundreds of thousands of Mexicans to Ciudad Juárez, across the border from El Paso, to work in maquiladoras. Maquiladoras are factories, mostly operated by U.S. corporations, where the salary was just $5 a day. With immigration remaining a hot button issue in the United States, we believed that Maryknoll should be at the border.

Maryknoll is best known for our work outside the United States. But part of the mission has always been to return to the United States with the stories of the people whom we have worked with. Our vision was that by living and working at the border, missioners would be able to bring together the two worlds of Maryknoll. We also envisioned a team comprised of all members of the Maryknoll family—lay missioners, sisters, and priests and brothers.

When we began in 1995, our family of five lived in El Paso, while Katie Hudak lived in Ciudad Juárez and worked there with a parish. I collaborated with different ministries in Ciudad Juárez, including the parish where Katie worked and an educational project run by Cristina Estrada, a resident of one of the poorest barrios in Juárez.

On the U.S. side, I worked to educate the people of the United States about immigration issues. We would receive many groups from churches and universities who came to the border to participate in a weeklong immersion program that we had designed. Chris is a nurse and worked in a clinic on the U.S. side, as well as with health promoters at a parish clinic in Juárez.

In 1997 Susan Tollefson, who had served in Thailand, joined our team, also working on both sides of the border. The following years Maryknoll Fathers Paul Masson and Ed Moore arrived, eventually leading a new parish in Ciudad Juárez called La Virgen de la Luz. Soon after, Maryknoll lay missioners Jim and Karen Halberg Weaver and their children joined the team, living in Ciudad Juárez and working at the parish.

The parish enabled us to have a significant impact in the communities we served. Father Paul had a very special connection with a Mexican indigenous community that had moved to Juárez while attempting to maintain their cultural traditions. Maryknoll Fathers Joe Everson, Manny Mejia and John Northrop also served at the border for a short time. 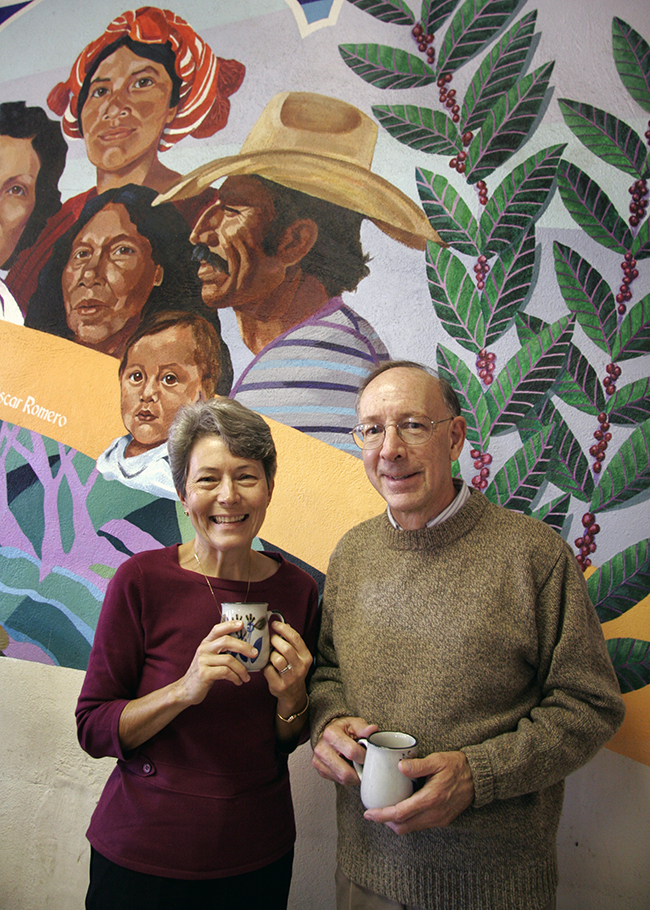 Joe and Linda Michon arrived in 1999. They had previously served in southern Mexico and Bolivia. In El Paso they worked at Las Americas Immigrant Advocacy Center, and with Joe being an ophthalmologist, he and Linda were also able to offer eye care in Ciudad Juárez.

Maryknoll Sisters Lori Beinkafner and Jo Lucker arrived from El Salvador to join the team in 2002. They too worked at Las Americas Immigrant Advocacy Center. With their arrival, we completed a key part of our original vision, to have all members of the Maryknoll family be a part of the border team. Ann Carr, a Maryknoll affiliate, also worked closely with the team.

In 2009 Ciudad Juárez became known as the murder capital of the world, largely due to violence from the Mexican drug cartels. Joe and Linda were warned that medical personnel were in danger. This violent reality and other factors caused the members of the team to make decisions that led to a temporary dimming of what had been a bright light on the border and within Maryknoll.

But for the past 16 years, the Maryknoll Fathers and Brothers have continued a presence at St. Patrick and Immaculate Heart of Mary parishes in Canutillo, just northwest of El Paso. Although both in their 80s, Fathers Bill Donnelly and Mike Gould still continue to serve there today.

Maryknoll Sisters Lil Mattingly and Maggie Sierra, who had both served in Bolivia, reestablished a Maryknoll Sisters presence at the border in 2015. Lil has been working with migrants and refugees at Annunciation House in El Paso, while Maggie has been involved with Centro Santa Catalina, a women’s coop in Juárez. In 2017 two more Maryknoll sisters, Janet Miller and Kathi Barbee, joined them to start their own border ministries.

Maryknoll lay missioners Heidi Cerneka and Coralis Salvador are now back at the border as well. An immigration attorney, Heidi is continuing Maryknoll’s involvement with Las Americas Immigrant Advocacy Center.

The U.S.-Mexico border region remains hugely significant and is in great need of resources. If anything, things have gotten worse for our brothers and sisters south of the border.

Border cities in the U.S. are among the poorest and most neglected communities in the country, and we continue to live off the sweat and blood of those who work for slave wages in factories on the Mexican side of the border. Immigration and border issues continue to be in the news, and immigrants are still not respected or valued in the United States. And our president wants to build even more walls, dividing us even more.

On a visit across the border, I saw the following message sprayed on the Mexican side of the wall: “Los muros vueltos de lado, se convierten en puentes” (Walls, turned on their sides, become bridges). This was and now continues to be the work of Maryknollers on the border — to turn walls into bridges; to live and to work to unite God’s people across borders.

Our faith teaches us that we are all children of God. Our faith demands that we welcome the immigrant. Our faith requires us to care for the poor.

We can and must do better. 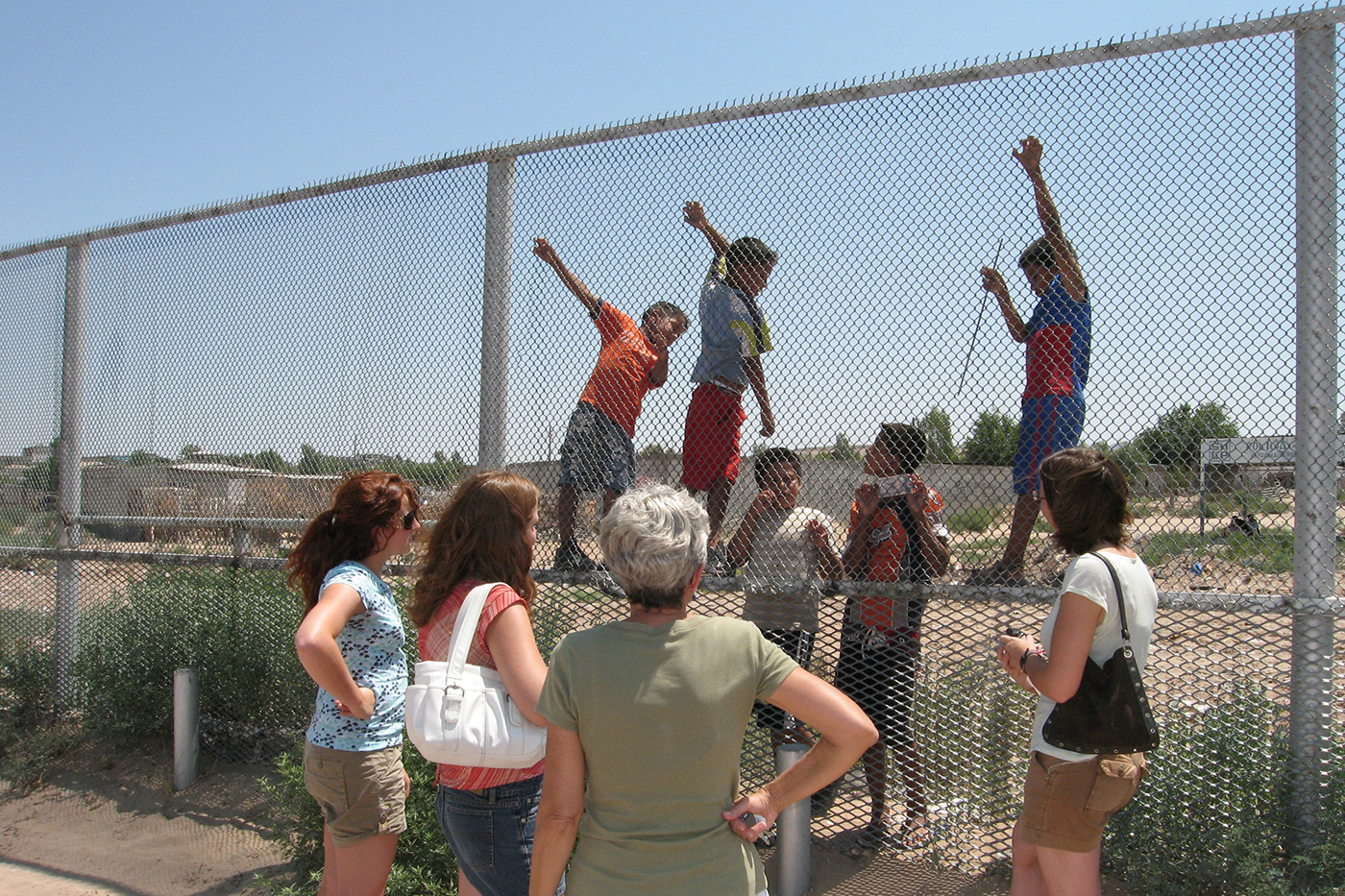 Participants in an immersion trip talk with kids in Mexico across the border fence in Anapra. Said West Cosgrove, “We often took groups to this site to allow people to talk to folks on the other side of the border and to feel and experience the separation.” 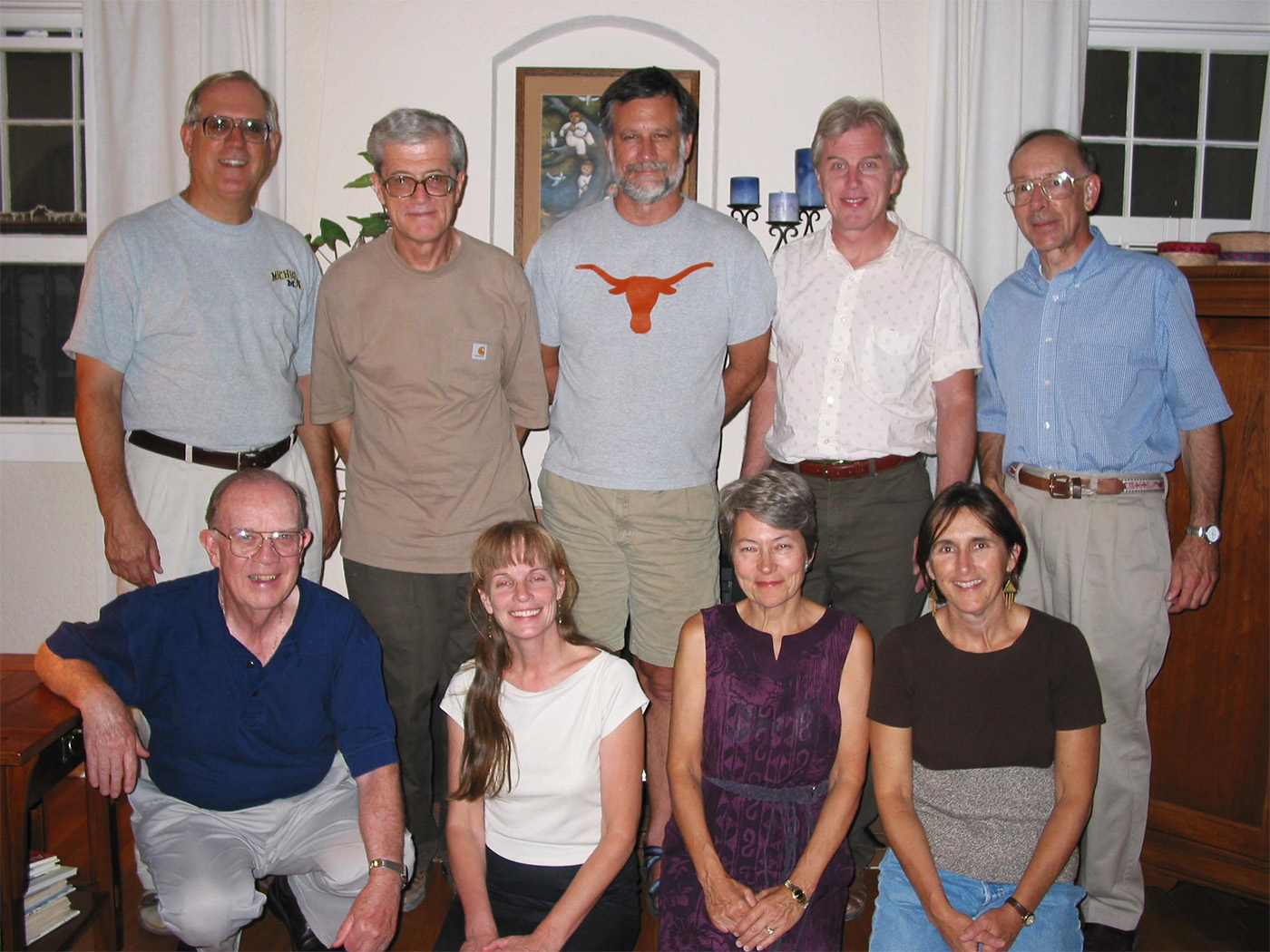 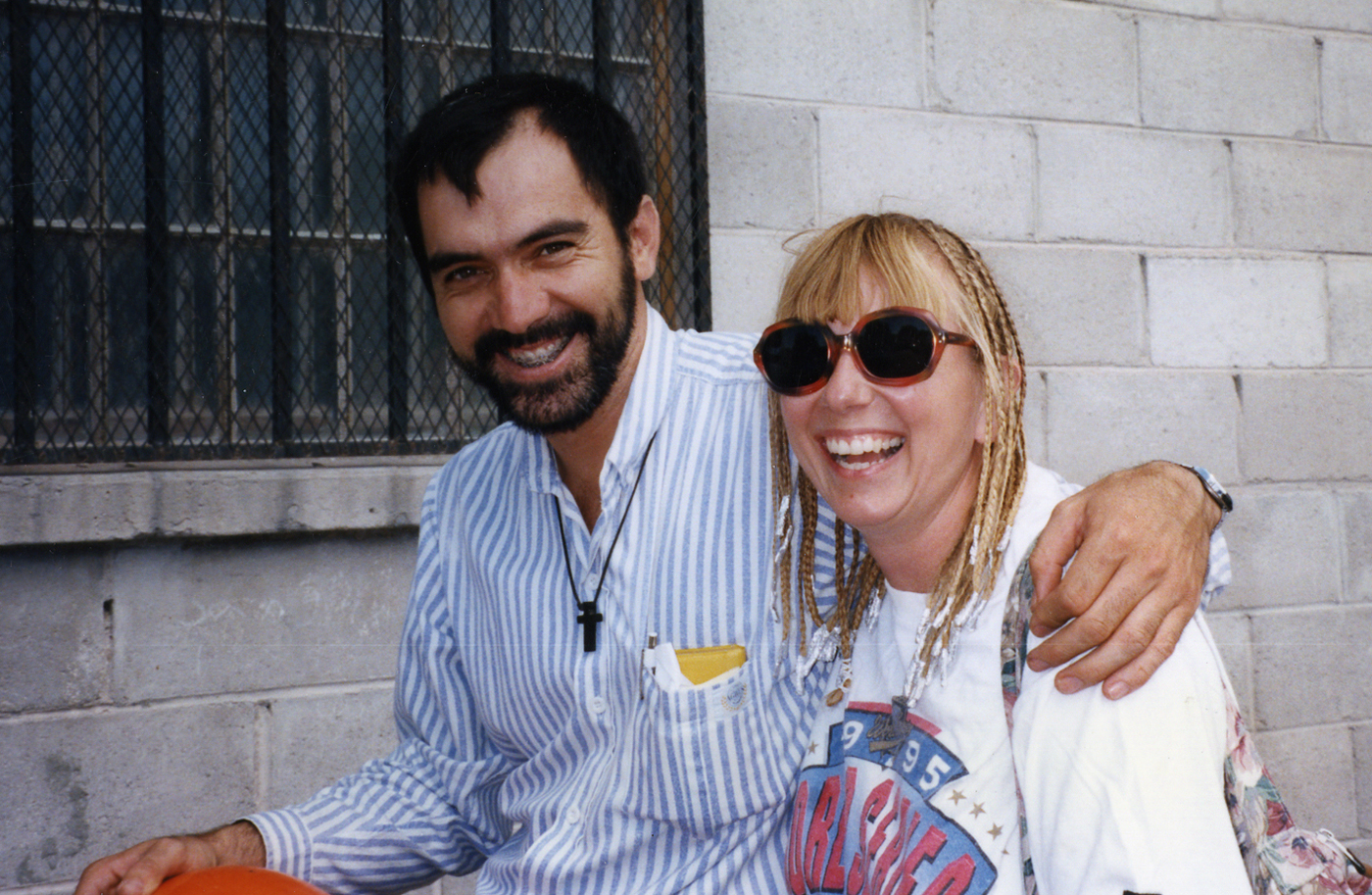 Katie Hudak with Father Antonio at a parish in Ciudad Juárez. 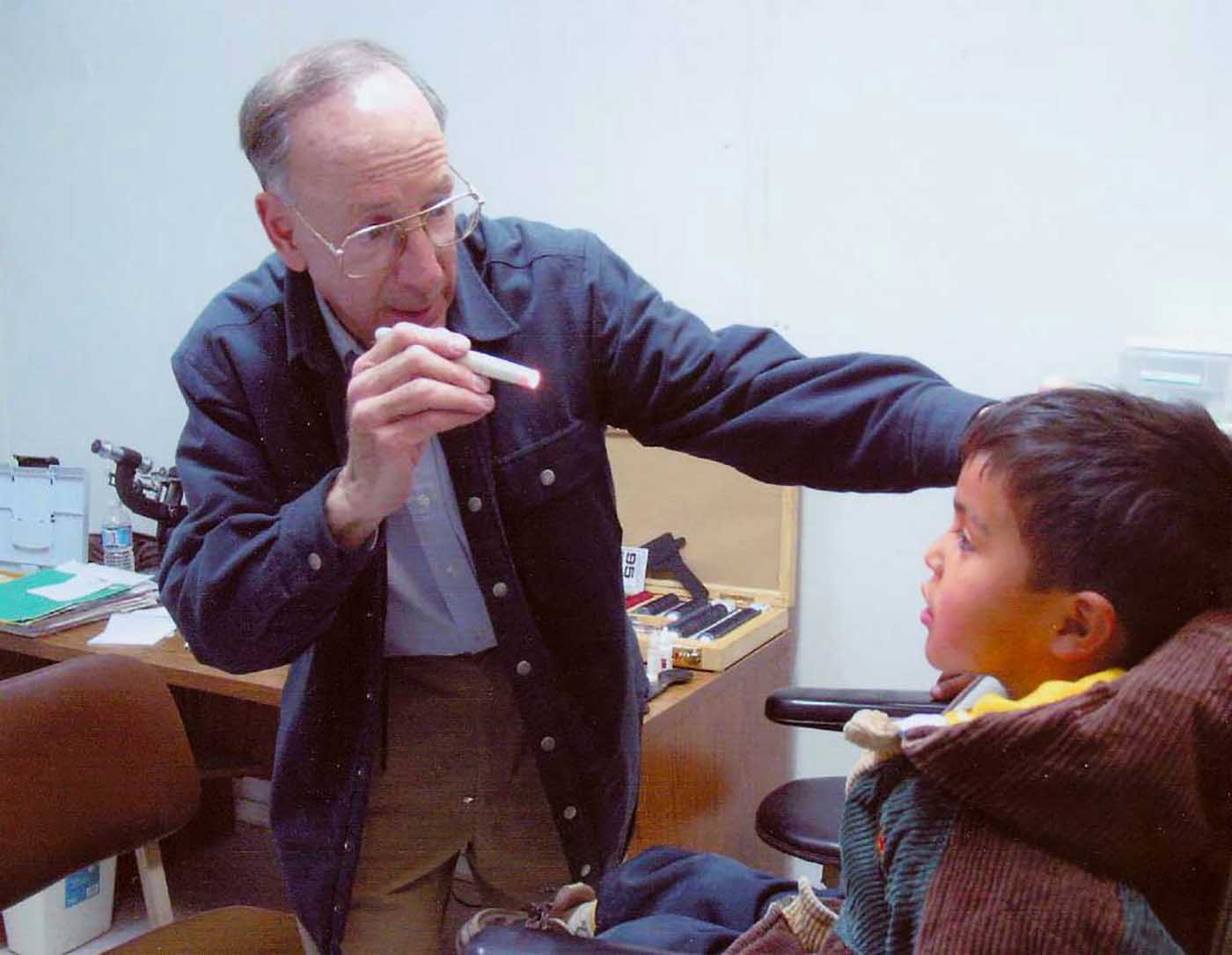 Joe Michon, performing an eye exam at a parish clinic in Ciudad Juárez. 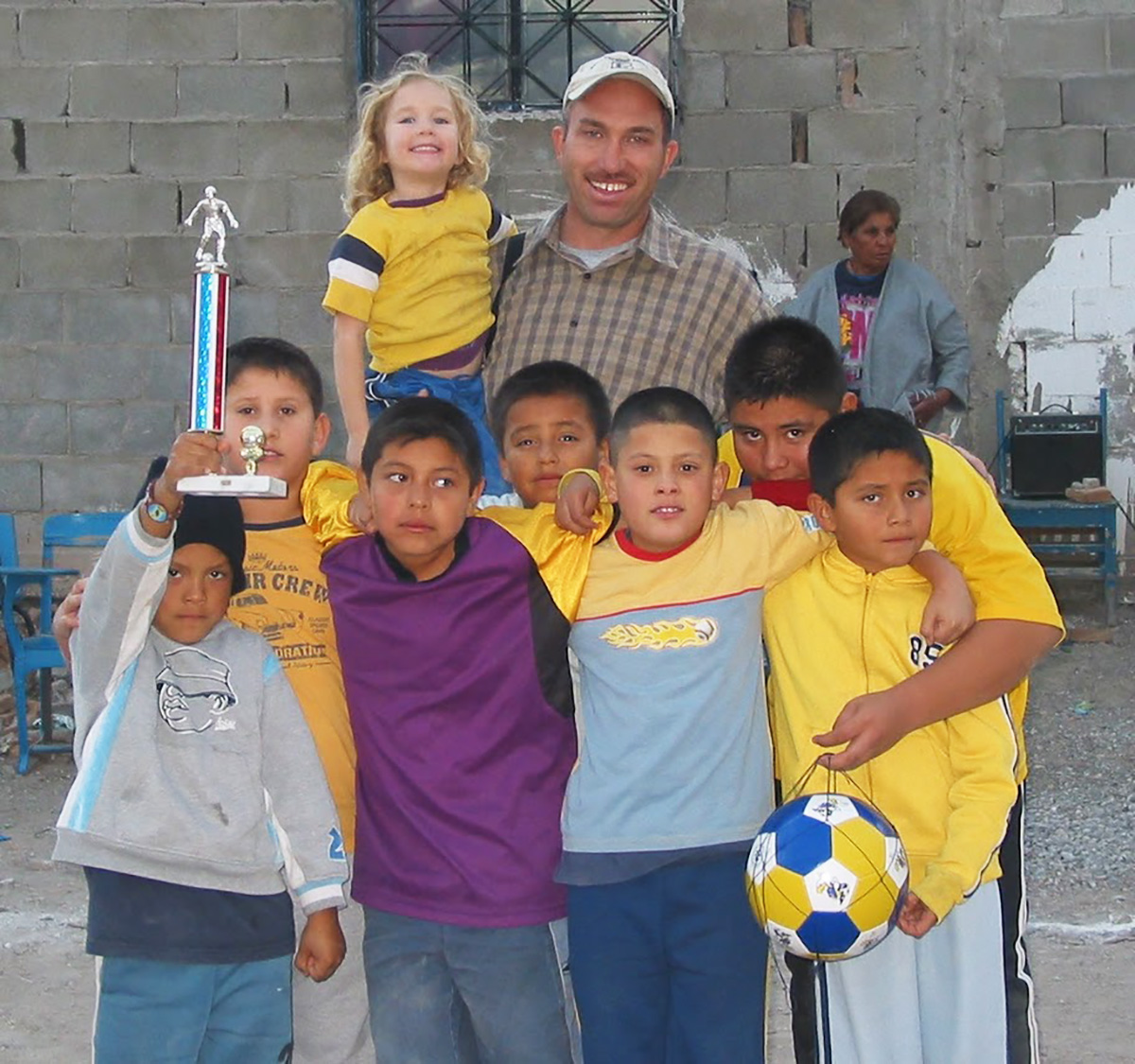 Jim Halberg Weaver with his soccer team and daughter Emma. 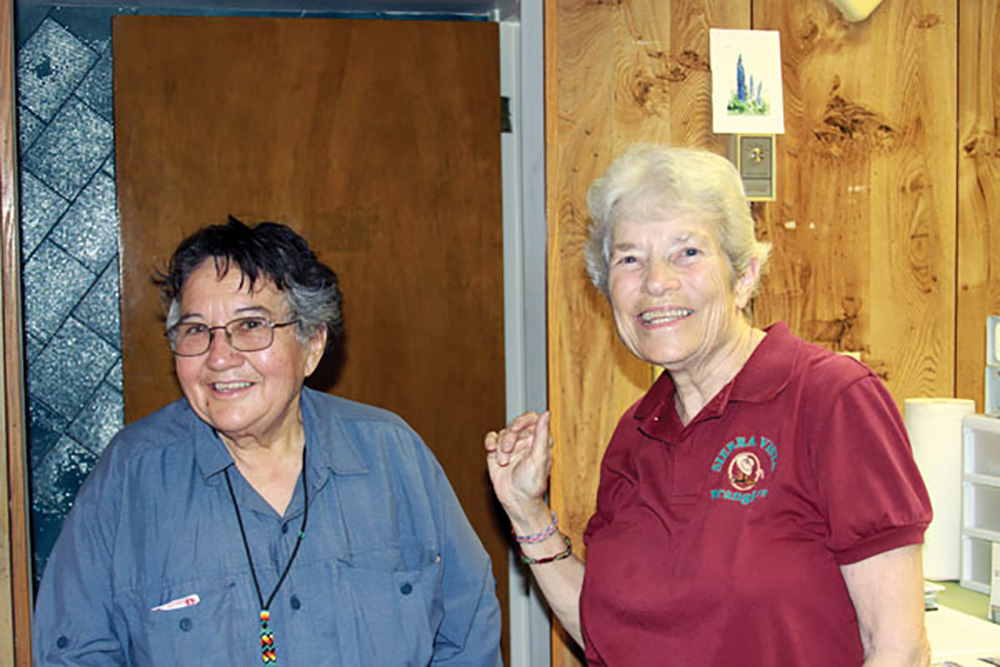 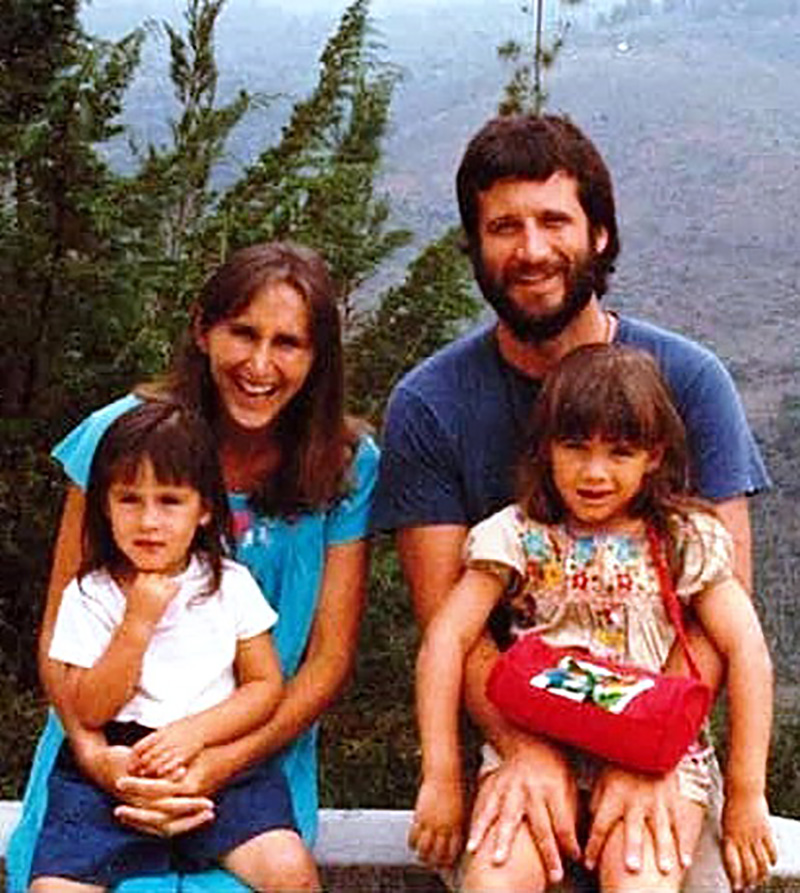 Chris Divin with Maura and West Cosgrove with Sara at a Maryknoll retreat in Posa de Rosas.

West CosgroveWith his family, West Cosgrove (class of 1985) served for 22 years as a Maryknoll lay missioner — first in Venezuela and then at the U.S.-Mexico border. He continued his work on border issues and migrant advocacy as director of education for the Kino Border Initiative and as western New York coordinator for rural and migrant ministry. He now lives in Austin, Texas.