Even in the midst of war and suffering, there is hope in the good people of South Sudan. 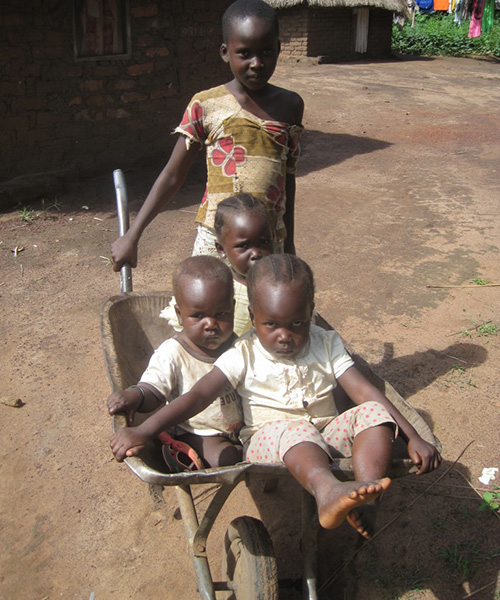 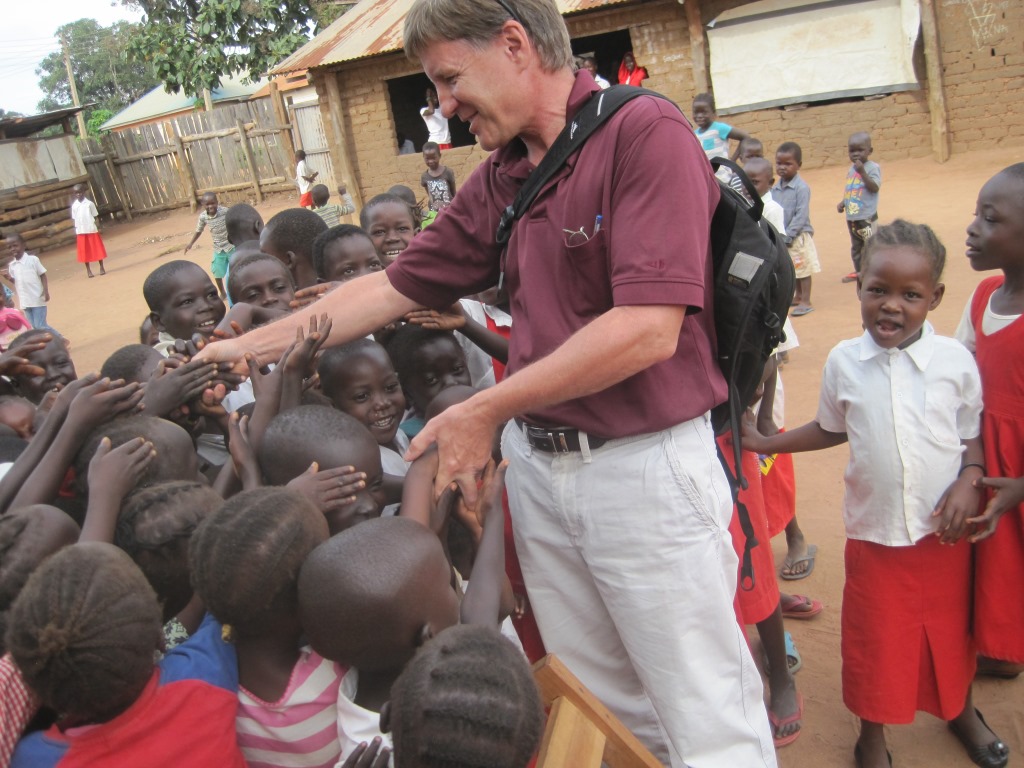 .
So much of the news in South Sudan has to deal with the problems this young country is facing. We hear of the constant and unremitting fighting going on all over the countryside. “Roads are not safe, don’t go out at night, stay away from certain places, watch what you say!” We hear of the famine. We hear of disease. We hear of every plague under the sun. We hear of the recent Peace Agreements and that everyone is skeptical. This sort of environment wears on a person and can slowly make one cynical.

Today I want to write about a positive spirit of South Sudan that I have noticed in just the short time I have been here. These types of stories don’t seem to make the headlines. Yet there are so many times when I see Jesus in the people around me.

The following are a few little anecdotes I have heard or experienced over the past 10 months in South Sudan: 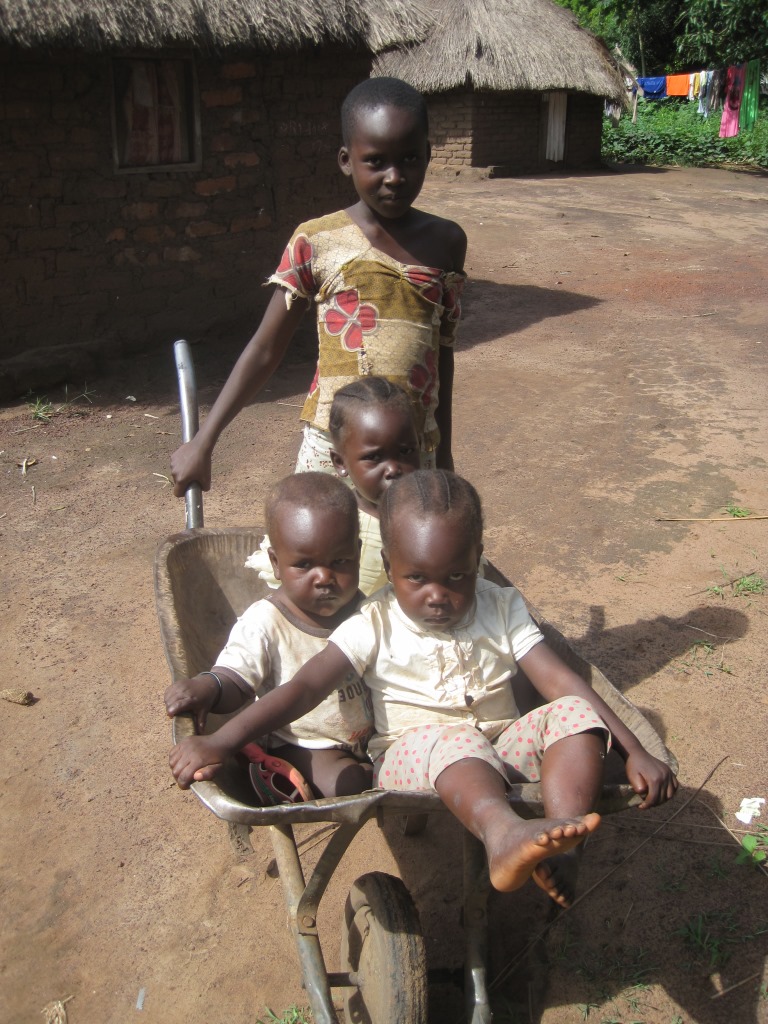 Children playing in a wheelbarrow in Yambio, South Sudan.

Sister Margaret, Sister Peg and I went shopping one day. Sister Margaret had inadvertently forgotten something she had bought. The merchant trailed her down the streets to give it to her. “Here, Sister. You forgot this!” Now that is service with a smile. Since I have been helping with the shopping on Saturdays this has happened several times. Sister Margaret told me that one time a merchant had actually come all the way out to the college to deliver a purchased item that had inadvertently been left in the store. It is heart-warming to know there are good people in this world and honest merchants.

Brother Jim frequents a local coffee shop. He just likes to go and read a book while having a nice hot cup of coffee. One time he went to pay and the owner told him another patron had paid for him. He doesn’t speak the local language so he just nodded to the person. The South Sudanese man smiled a big grin. This happened a few more times with other patrons as well. So even South Sudanese can “pay it forward.”

Father Awassa was confronted with an emergency. He had to get a handwritten letter to Juba from Yambio today. He called the local airline company and, yes, there would be a plane arriving in a short time, but he must hurry to get the letter on board. Father Awassa finished the letter and rushed to the airport. The plane was already boarding when he handed the letter to the official. But Father Awassa did not know that there was a fee for the service. He had left in such a hurry he had no money whatsoever on him. He started to plead and beg the official that he would pay but for now he had no money. The official was not in a cooperative mood. He refused unless he got the money.

A motorcycle taxi driver was listening and quite enjoying the back and forth between the priest and government official. Finally, it looked like the letter would not go. It was then that this complete stranger stepped up and said, “Father, let me pay for the letter.” Father Awassa was amazed—taxi drivers work hard but are poor and rarely have money. The man started to pull out of this pocket and that pocket all sorts of wrinkled and dirty notes. He slowly collected enough South Sudanese pounds to pay the official for the letter delivery. Then the “Good Samaritan,” as Father Awassa called him, drove off.

Father Elia is a kind-hearted and soft-spoken priest. His spirit of serving his parish is so strong despite all the challenges and difficulties. He rarely thinks of his own problems and is always helping others. One day the people brought him a tortoise. He adopted that one and several more that the people found. When Father Elia went on a sabbatical for the first time in years and years, he brought the tortoises to our Solidarity Teacher Training College. Why? Because he knew we would take care of them. If he left them in his parish, he suspected the people would eat them. “There is too much killing in South Sudan. These tortoises deserve life too.” said Father Elia.

Ali was terrorized by Sudanese soldiers as a youth. They threatened to kill him two times and he was conscripted as a child soldier. Finally, after escaping, he moved from place to place until landing at our college in Yambio. He went through the Trauma Healing Course and found that it took away his nightmares. He is calmer now. He still uses the techniques when he feels the anger and anxiety rising in his heart. He is grateful to Solidarity with South Sudan for helping him heal. 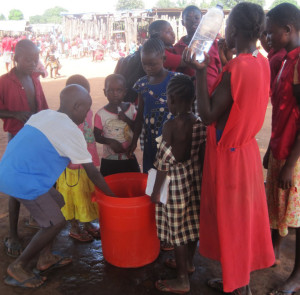 Children getting water during school break.

A priest in a neighboring area asked Solidarity for help. He himself cannot go back to his parish area at the moment. The governor of that area wants him dead for speaking out against the abuses officials have perpetuated upon the people. He worries about a group of women who were kidnapped into the Lord’s Resistance Army (LRA) some time ago. This is an evil group that runs around the jungles of central Africa killing and looting. No one has been able to stop them so far. These women somehow escaped the LRA with the children they had after being raped by the LRA fighters.

Now they are shunned by society because they have this history of being in the LRA. They are forced to eke out a living in remote areas of the jungle. But they need help and the local community decided they will help them. The community will send two members to Solidarity to be trained as teachers. Not the first for Solidarity. STTC currently has two other graduates teaching in the bush to an isolated community. Amongst the violence and chaos, God is present to His lowly ones.

I was talking with some people outside our college. As we stood there chatting I felt something wet in my hand. I looked down and a little girl had come up and just put her cold, sweaty, little hand in mine. She wanted to greet the foreigner. I greeted her in the usual English, “How are you?” and she replied, “I am fine.” In Zande I then asked her name. “I am Isabella,” she said with a toothless smile. “How old are you, Isabella?” “I am 4.” Then off she went to play with her friends.

All of these stories show us that there is hope. There are always good people in every place at every time. They outnumber the bad people. They just don’t get the press or attention

Thank God, the Holy Spirit moves among and in us.

All photos courtesy of Gabe Hurrish.