2341
APPLYDONATE
Home » Tanzania » Mpamba: A story of patience and progress

Mpamba: A story of patience and progress

Providing new opportunities for a Tanzanian child with cerebral palsy 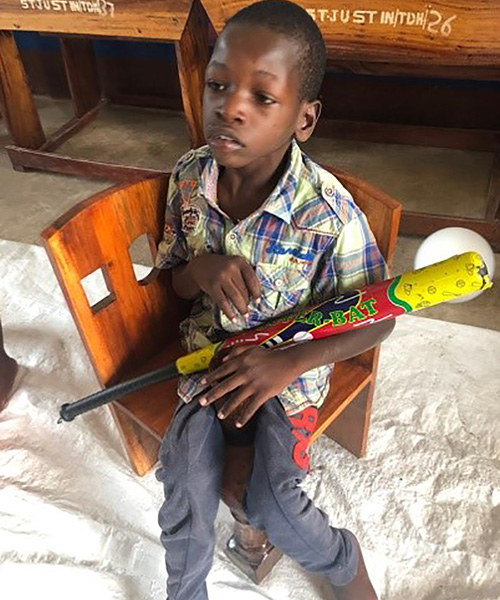 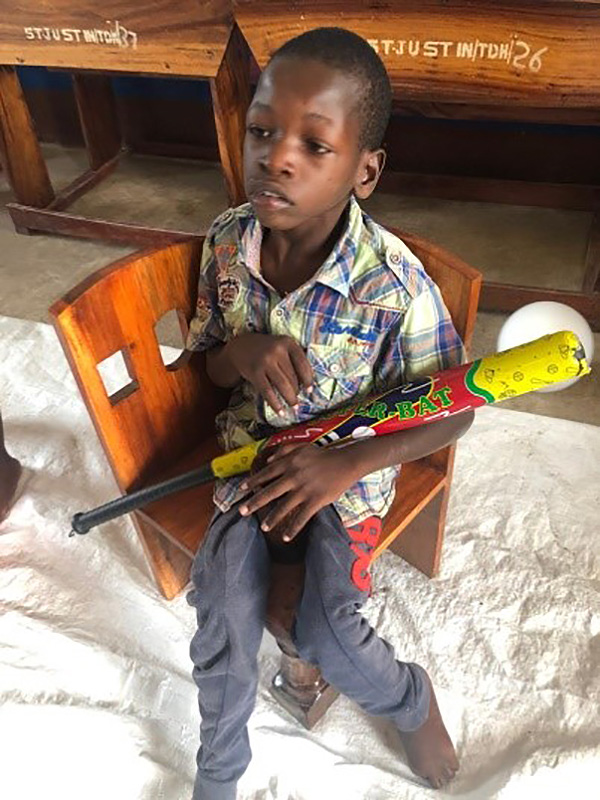 Mpamba at St. Justin’s Centre for Children with Disabilities in Musoma.

On a Saturday morning in October, I waited outside our parish in Mabatini for Mpamba and his father to arrive. They were to leave Mwanza in the early morning and arrive in Musoma before lunchtime in order to visit a school for children with disabilities called St. Justin’s Centre.

As the time passed, the expected lateness eventually turned into a time that forced me to concede they weren’t coming. Though my previous 10 months in Tanzania had shown me time and time again the importance of patience and flexibility, admitting that I had been waiting in vain to see Mpamba’s blue metal wheelchair pushed up the hill by his father, made me bitterly angry.

Mpamba is a 10-year old boy with cerebral palsy, who has been attending our physiotherapy program in Mabatini. Though I had seen him many times in our garage turned physiotherapy center, I never knew much about him, his medical condition or his life.

It was only after the suggestion of fellow lay missioner and pediatrician George Stablein that perhaps Mpamba would be a good candidate for St. Justin’s, I had made it my singular responsibility to get him there. This process included things like getting a consultation with a neurologist about a possible seizure disorder, negotiating with the St. Justin’s head teacher about whether or not he could be self-sufficient in the bathroom, and figuring out from where his tuition money would come, if he were to finally be accepted.

With the paperwork that needed to be filled out completed, the doctor’s note signed, and the always-elusive birth certificate obtained, the day was set for Mpamba and his father to make it to St. Justin’s for an interview. And yet, as I stood out under the emerging heat of the sun rising over our Mabatini’s rocky hills, it occurred to me that maybe it just wasn’t meant to be. And on that day, for reasons still unknown to me, it simply wasn’t.

A week or so passed before I finally saw Mpamba and his father again. They came for physiotherapy, and his father apologized for not arriving as planned. He didn’t offer an explanation, but I figured it was better that way and we’d just as well spend our energy planning the next steps for Mpamba.

This next time, we decided, it would be best to have them accompanied by a staff member on their trip to Musoma. Thanks to the work of my co-worker, Justine, they arrived at St. Justin’s just as we planned.

A few weeks after his initial visit, I received a phone call from Stephano, the head teacher of St. Justin’s telling me that Mpamba would be accepted and he could start in January! As if by God’s plan alone, our program also had an adequate budget surplus from 2019 to cover at least his first year of tuition.

In mission, so much of what we do is simply planting seeds and leaving the rest to God. However, I can’t help but think God also wants us to occasionally see the fruit of our work. This is exactly what happened for me when I received this picture and the following message from Marilyn, another Maryknoll lay missioner, who ministers to the children at St. Justin’s:

“Mpamba is great! He is feeding himself. First success! We are working on improving his hand skills. No, he is not playing baseball yet, but he will hold onto the bat.”

“You guys are changing his life!” I replied back to Marilyn. And in those moments of complete gratitude, hearing of this child making incredible progress in just a few weeks in his new home, I realized that Mpamba too had changed mine.