2341
APPLYDONATE
Home » U.S.-Mexico Border » How Maryknollers minister at the border

How Maryknollers minister at the border

Maryknoll lay missioners, sisters, and priests and brothers respond to the needs of migrants and communities at the U.S.-Mexico border. 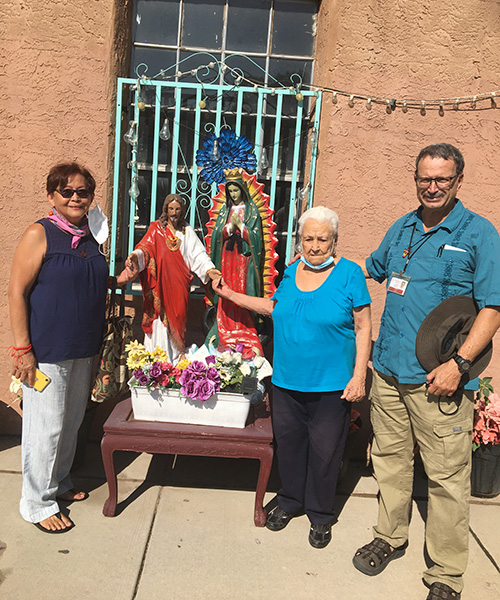 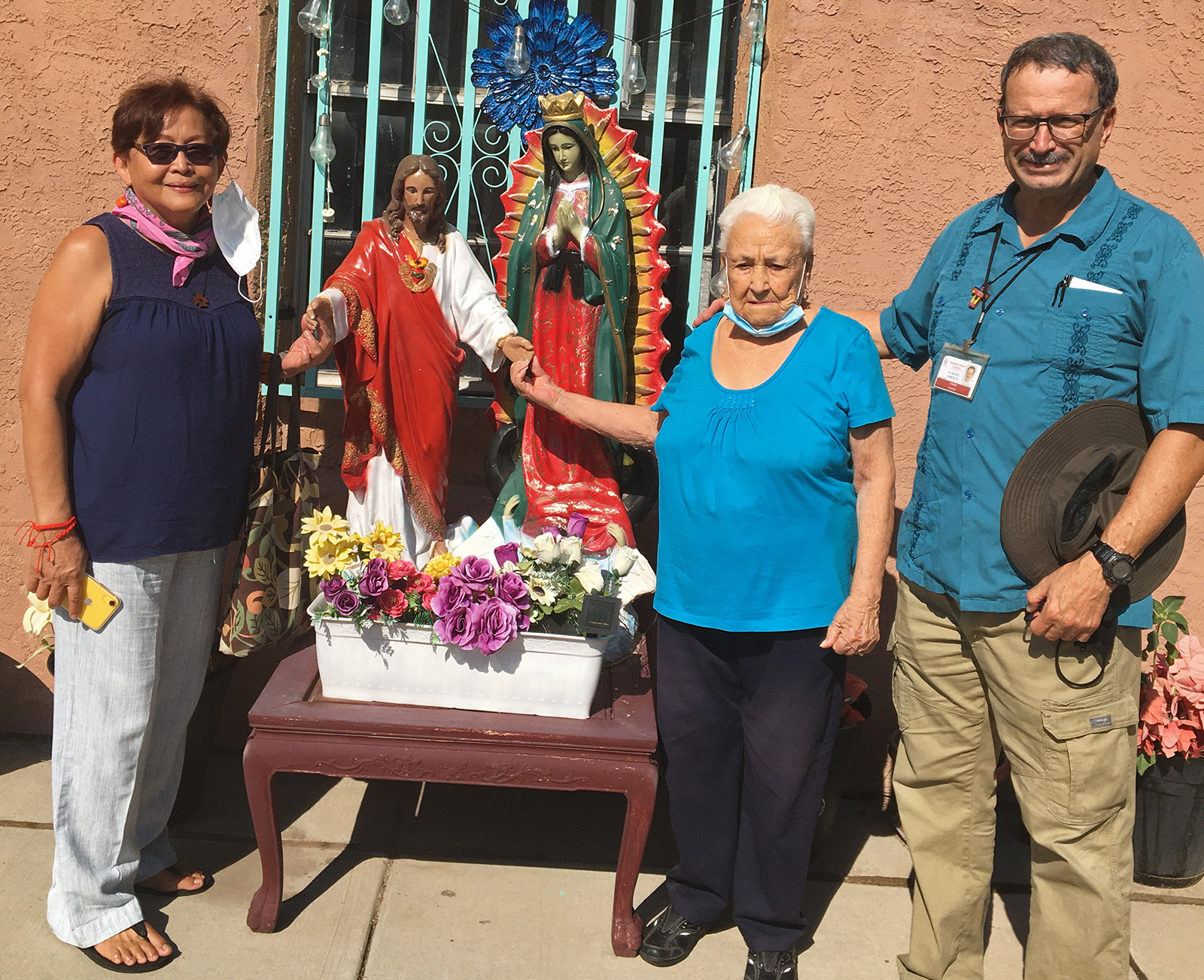 Coralis Salvador boarded a train in Kenya, headed to Nairobi. “After 19 years in Africa with Maryknoll Lay Missioners, my contract was ending,” Coralis says. “I planned to take a vacation and spend time with my grandchildren.” Yet, a heaviness weighed on her heart. A humanitarian crisis was worsening at another Maryknoll mission site: the U.S./Mexico border.

“That week, a father and daughter drowned in the Rio Grande River,” Coralis says. “The current swept them away, with the little girl tucked inside her dad’s shirt. I reflected on the plight of these migrants. I prayed the whole train ride. Finally, I said, ‘OK, Lord, you are telling me to go to El Paso.’ I said, ‘Yes,’ and the heaviness lifted.”

In El Paso, Coralis joined other members of the Maryknoll family called to the border by their faith. Maryknoll Fathers and Brothers, Maryknoll Sisters and Maryknoll Lay Missioners respond to the desperate need of migrants and border communities. In the words of Pope Francis in his apostolic exhortation The Joy of the Gospel, “Mission is at once a passion for Jesus and a passion for his people.”

“El Paso just kept coming to my head — and to my heart,” says Maryknoll Sister Lelia Mattingly, who entered Maryknoll in 1960 and worked in Bolivia. “I was first exposed to the precarity of the lives of migrants in Shelbyville, Kentucky, getting to know migrant workers who came to harvest tobacco.” She worked for four years on the border in Arizona before beginning to serve at Annunciation House in El Paso in January 2016. 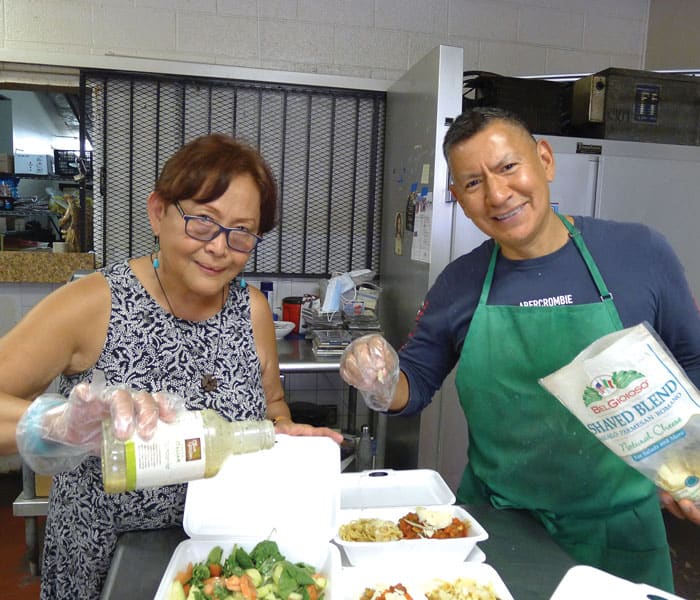 Annunciation House is a network of shelters that provide hospitality for individuals and families released from Immigration and Customs Enforcement detention centers. Buses drop off asylum seekers daily. “In 2019, at one point we were getting over a thousand migrants a day,” Sister Mattingly recalls.

Maryknoll Sister Janet Miller and Maryknoll lay missioner Debbie Northern volunteer at Annunciation House’s newest shelter, Casa del Refugiado (Refugee House). A former warehouse, the facility can accommodate 500 people. Guests stay from one to three days while their sponsors are contacted and travel is arranged. Annunciation House also hosts long-term guests in smaller settings, such as the one where Coralis currently serves. She now finds herself accompanying families similar to the one whose plight drew her to the border.

“We have a family of four staying with us,” Coralis says. The father of the family drowned crossing the Rio Grande River. “Customs and Border Patrol threw them a rope, and saved the mother and children. But he was swept away,” she explains sadly. “The children are 15, 14 and 2 years old. Funeral arrangements are being made, and we are helping with travel to the family’s sponsor.”

Lay Missioner Heidi Cerneka’s work often takes her to the detention centers where refugees are held (before deportation or release to shelters). Heidi, who joined Maryknoll Lay Missioners in 1996, worked for many years in Brazil accompanying women in prison. “Prison is the place where I most feel the presence of God,” she reflected. “When you strip a person of everything else — family, home, job, freedom, and more — sometimes all she has left is her faith and her God and she holds tenaciously to that.”

Heidi came back to the United States to study law, earning her degree in 2017. She works as a staff attorney at Las Americas Immigrant Advocacy Center, providing legal counsel for refugees. Hearing the stories of asylum seekers forced to flee their homes, Heidi witnesses their desperation. “Nobody wants to swim a river, or climb a wall, or cross a desert at risk of dying of dehydration,” she says.

Debbie agrees. In addition to volunteering at the migrant shelter, she serves on staff at the Encuentro Project, a faith-based organization that promotes understanding of border issues. “During eight years of serving in El Salvador, I have seen firsthand the violence and extreme poverty that would impel people to take such a drastic step as to flee their own country and make a difficult journey to find a better, safer life,” she says. 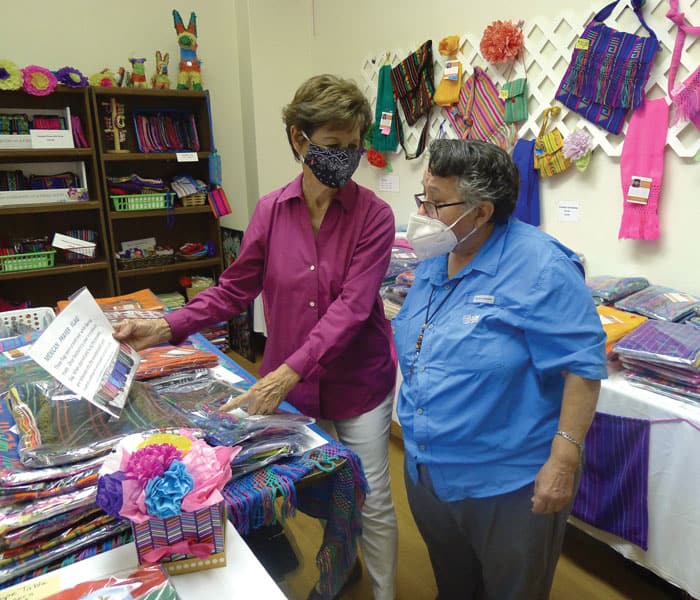 While these Maryknollers welcome refugees to the United States, Sister Margaret Sierra accompanies families on both sides of the border. Born and raised in New Mexico, Sister Sierra was already familiar with El Paso and its counterpart city, Ciudad Juárez. “There is a very strong connection economically and culturally to Mexico,” she says. “Over 80% of the population in El Paso is Latino. Many families are binational, and many attend school or hold jobs on the other side.”

Sister Sierra supports Centro Santa Catalina, a non-profit organization in Ciudad Juárez established by two Adrian Dominican sisters. Its sewing cooperative provides an alternative to the maquiladora factories where workers earn as little as $55 to $60 a week. Empowering and educating women and children, the center helps ensure that their families don’t have to leave their homes in search of a better life.

Sister Sierra, who entered the Maryknoll Sisters in 1977 and worked for 12 years in Latin America, shares a special connection with the women of Santa Catalina. “I see these women and I see my mother, sewing,” she says. “I see my aunts who made their living sewing at a small shop in Albuquerque.”

Due to the pandemic, Sister Sierra now stays in touch with the co-op through computer or phone. But before COVID-19 prevented in-person gatherings, every Friday morning the women came together for Mass or prayer. “In mission, I learned something that stayed with me,” remembers Sister Sierra, who is a trained chaplain. “People need clothes, food. Yes, they need all that. But they also have a need for play, for prayer, and for beauty, for a little joy in their lives.”

Maryknoll priests have served at parishes in the Ciudad Juárez and El Paso dioceses, ministering on both sides of the border. Fathers James Kofski and Kenneth Moody offer pastoral care at St. Patrick’s Church in Canutillo, Texas, a poor, dusty town of about 6,000 inhabitants. 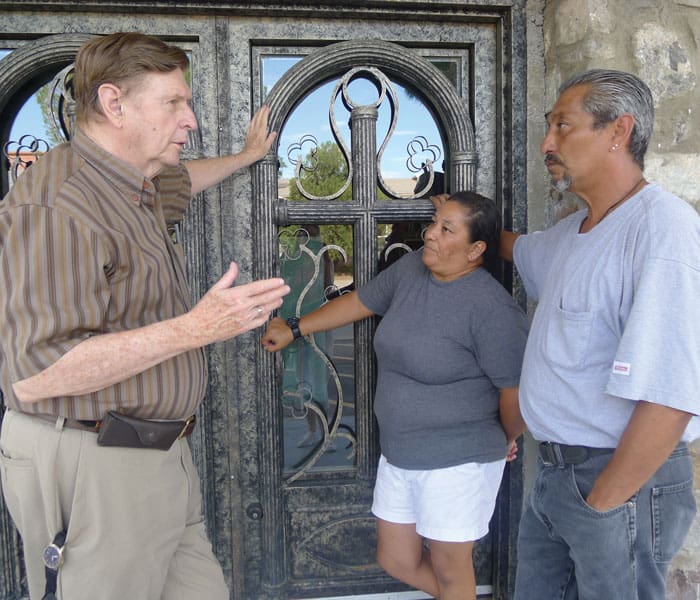 Father Moody, a native of Hackensack, New Jersey, ordained in 1970, served for 24 years in Venezuela and for 14 years in Bolivia. His call to the priesthood — and to mission — came when he was young. “My eighth-grade teacher brought in Maryknoll magazine,” he recounts. “All I knew until then was that I wanted to love Jesus. In those pages I saw how we can love Jesus, doing the Works of Mercy.”

His parish stands on the banks of the Rio Grande River, in a neighborhood with abandoned houses and decrepit trailers on dry, sandy lots. While others might be dissatisfied in such a desolate setting, Father Moody is delighted: “It gives me the opportunity to do what I most like to do: share the Good News.” He enjoys getting to know the community, saying Mass and offering the sacraments. “I try to make contact with them in their own reality.”

Parishioners America and David Sambrano, lifetime residents of Canutillo, have a long family history at St. Patrick’s. David’s great-grandfather helped build the church, and as a child, David joined his parents to help construct the parish activity center across the street. When asked to describe Maryknoll’s ministry at St. Patrick’s, David answers, eyes filled with tears, “I can tell you about Maryknoll in one word: ‘love.’ ”

This article first appeared in the Winter 2022 issue of Maryknoll magazine.

Deirdre CornellDeirdre Cornell served as a Maryknoll lay missioner in Mexico (2004-2007). She is an associate editor of Maryknoll magazine and the author of three Orbis Books, including Jesus Was a Migrant.