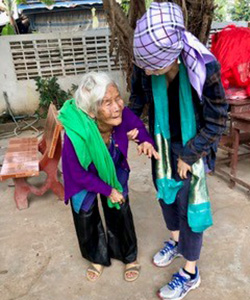 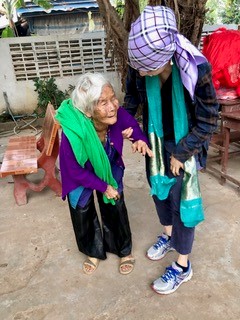 There are a few fishing communities along the Basaac River. Depending on traffic, it takes about an hour by car from Phnom Penh to the vicinity, then another 10 to 15 minutes by boat to cross the river to reach the other shore.

In one of these communities, about five years ago at a Sunday morning mass, I met an elderly woman. She was getting on in years and was not able to remember her exact age. People call her “Ma Yay,” meaning Grandma. 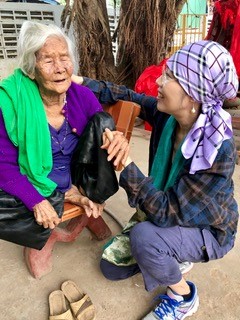 In conversations over the years, Grandma has told me some of her life stories. She has witnessed a number of intense battles, and particularly feels grateful to have survived the Khmer Rouge time. Grandma and many other people like her crossed the border into neighboring countries, often with only the clothes on their backs. They journeyed strenuously in the dark of night or under thundering gunfire to flee for their lives. They had no proper authorizations or documents. The visas they possessed was their strong wills to live. They were refugees on more than one occasion.

At different points during these atrocious periods, Grandma’s husband and several of their children were killed simply because they happened to be in a war zone or died from starvation or diseases. At least one of their children survived and was married. There have been a few grandchildren and great grandchildren.

Nowadays Grandma’s descendants are very busy trying to make a living in the modern world, no longer by fishing as their ancestors did, but by going in to the city to work for others. Touching the rosary on her neck, Grandma said in her soft-spoken voice that the rosary had kept her going through the hardships in war time and, yes, in peace time as well to find enough food to feed everyone in the family. This continues to be Grandma’s way of giving thanks to God and praying for her loved ones.

From time to time I have been visiting Grandma to see how she is doing. At the last New Year’s Mass she was a bit more frail and bent over. I held her arm as we took a few steps slowly around the churchyard. One of her eyes no longer has sight due to a bomb explosion she survived, but Grandma’s good eye sparkled with light as she described events that occurred nearly a century ago. 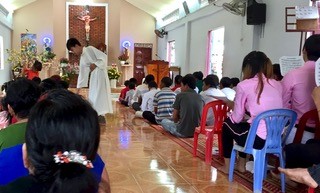 I thanked Grandma for sharing her encounters of history in this part of the world, and for being such a vivid model of faith for the younger generations. She beamed with the biggest, cutest toothless smile ever and replied that she was happy that I listened to her.

To me, Grandma’s entire being seemed to embody the hymn verse based on Luke 8:15: “Blessed are they who have kept the word with a generous heart, and yield a harvest through perseverance.”