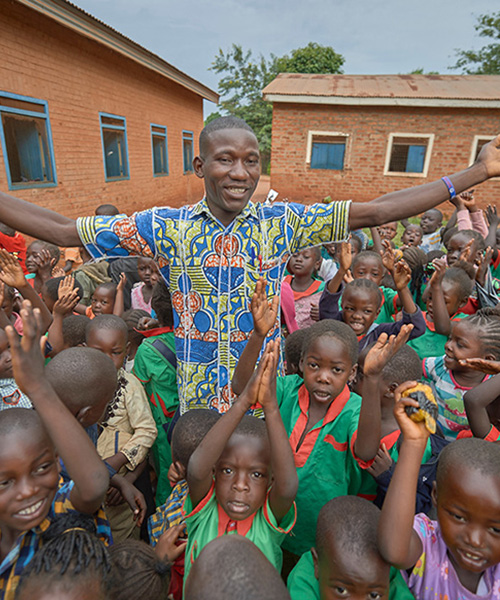 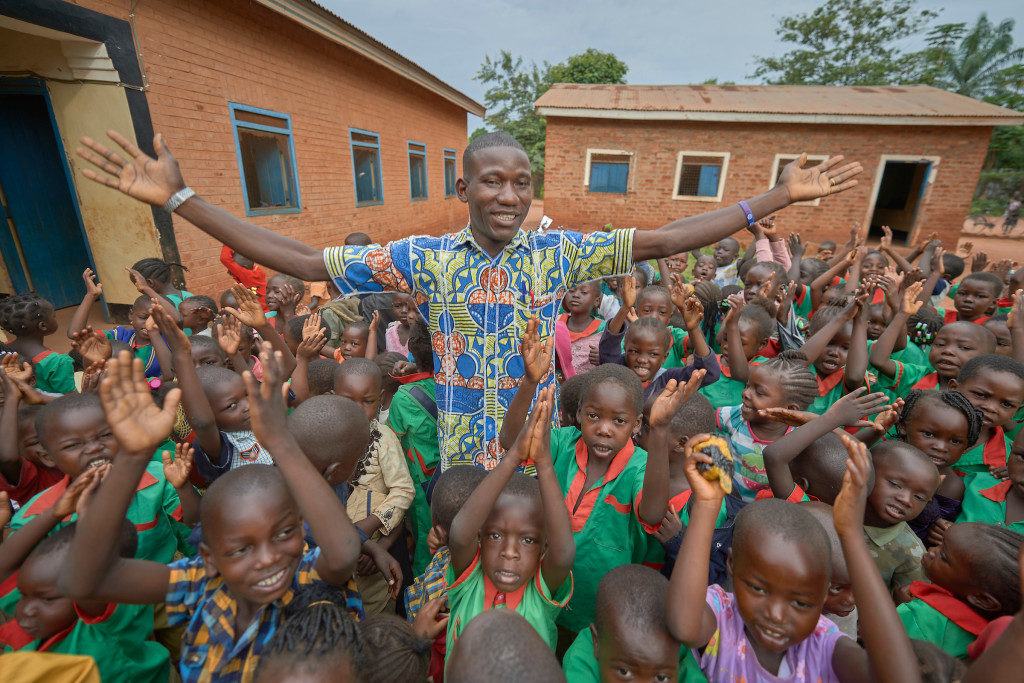 Gabe Hurrish helps to train teachers like Victor Hume at the Solidarity Teacher Training College in Yambio, South Sudan. Here Hume is leading a song at a Catholic school in Yambio. Photo by Paul Jeffrey.

Gabe Hurrish has served with the Maryknoll Lay Missioners in the war-torn East African nation of South Sudan for less than two years, yet the Wisconsin native has close to 30 years of mission experience in Asia, Africa and Latin America, going where the Spirit leads him.

“I almost never go to a place that I have planned going to,” says Hurrish. “There is something like an invisible force—I call it the Holy Spirit—guiding me to these places. It’s only in retrospect that I can see why I was sent to a particular place.”

He may not know exactly why he goes somewhere, but he certainly knows what he’s doing in South Sudan and why it’s important: he’s helping to build the world’s newest country.

His ministry is teaching the teachers. Working with Solidarity with South Sudan, a unique joint international initiative of religious orders, Hurrish is engaged in teaching social studies, computer classes, religious education and English and helping to administer the Solidarity Teacher Training College in Yambio. 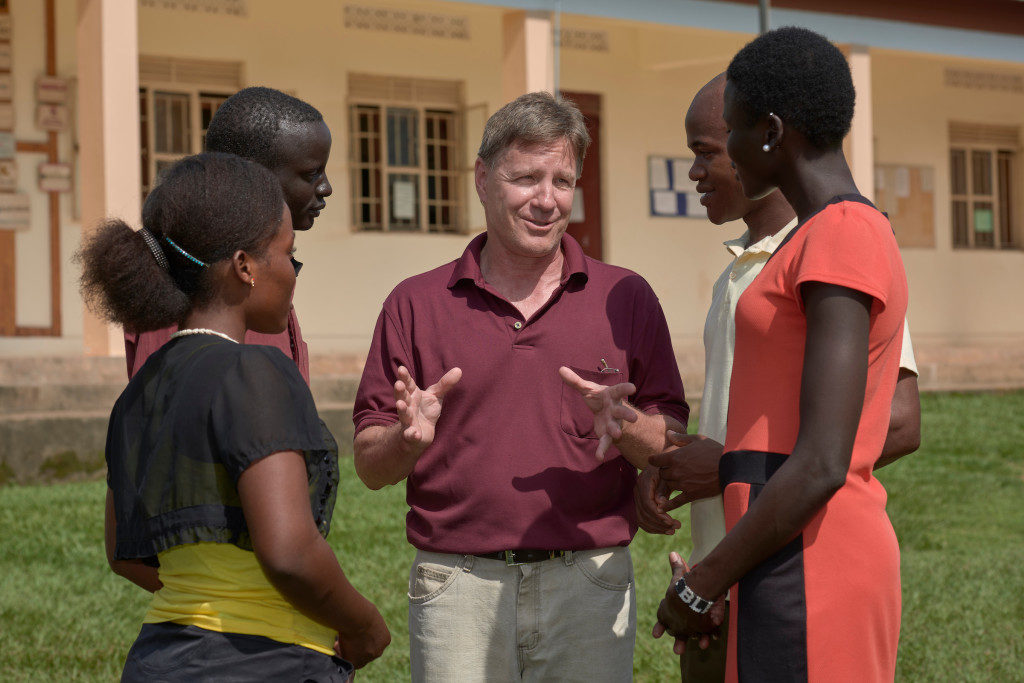 Many of those who do go to school in South Sudan have to walk up to two hours to reach a classroom, he says. If it rains, if the roads or trails are insecure, or someone in their family is sick, they can’t go. Many of the schools are in dilapidated buildings, with 100 to 125 students crammed into a tiny classroom with no desks and few benches or chairs. In the more remote areas, classes are held under trees, with students sitting on rocks, logs or the ground.

Teachers are paid as little as $1.50 a week, and as a result, some do not put much effort into teaching, and must tend a family crop or start a business to survive, Hurrish says. In this challenging environment, teachers are not the supported leaders they are in many other countries.

Against these overwhelming odds, Hurrish and the Solidarity Teacher Training College provide a new vision that promotes qualified and trained teachers as respected role models who are the key to a better future for their country.

“As I look at these students hunched over their exams and concentrating so hard, I think this is the future of education in this new country,” Hurrish says. “I’ve never felt so connected to helping build up a country before. Every teacher we put out there makes that much difference in the country, fostering education and growth.”

In addition to learning how to teach, the college’s students also learn other lessons that are crucial for South Sudan’s future. “We have students who come from all over the country, and some even come from Sudan,” Hurrish says. They don’t necessarily speak the same languages and they come from different ethnic groups, some of whom have been at war with each other.

“Part of what we’re trying to do is bring them together to show that everybody is equal, and that they can have peace among the different ethnic groups,” he says. 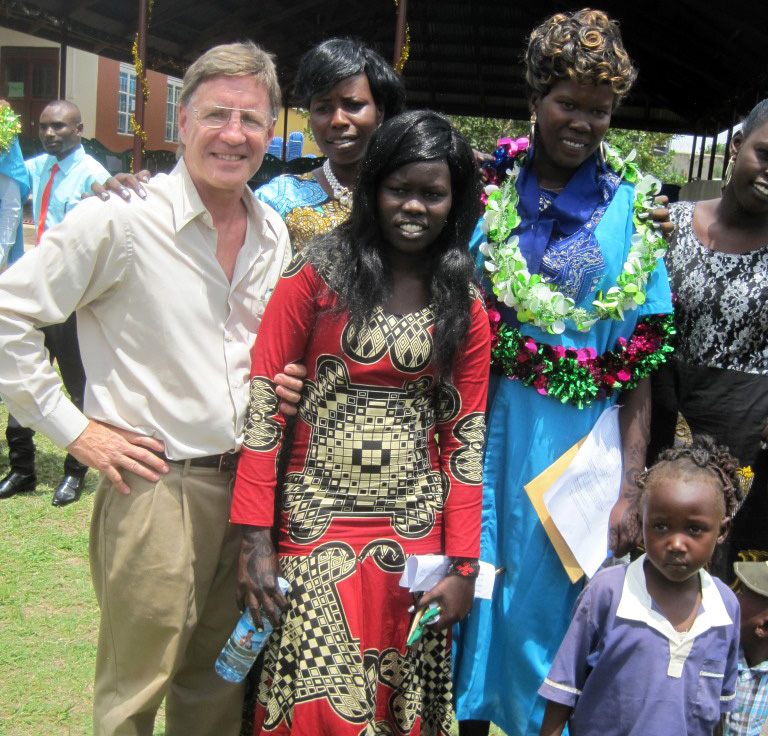 Gabe and graduates after the graduation ceremony in April 2019

The good news, he adds, is that Solidarity Teacher Training College currently has more than 100 teachers-in-training enrolled and graduates 20 to 30 qualified and trained teachers every four months. Since 2013, the college, located in the Gbudwe state in southwestern South Sudan, has graduated about 250 teachers. Another 2,000 teachers have benefited from Solidarity with South Sudan’s in-service training.

“These are the young, sharp minds that will be working with the youth of tomorrow,” Gabe says. “They are the future, and God willing, they will be the agents of change.”

One of the teachers who graduated in 2017 wrote, “Sister, when I sleep at night and think about this contribution of … Solidarity compared to this economic crisis of our country, I am sincerely got surprise with blessing of God toward our country.”

And Francis Kubako, a supervising teacher at Masiya Primary School, commented on one of the STTC student teachers who did his practice teaching in that school, “What I have seen with my eye is a wonderful teacher. Diu manages to control the class without using a stick, which surprised me.” 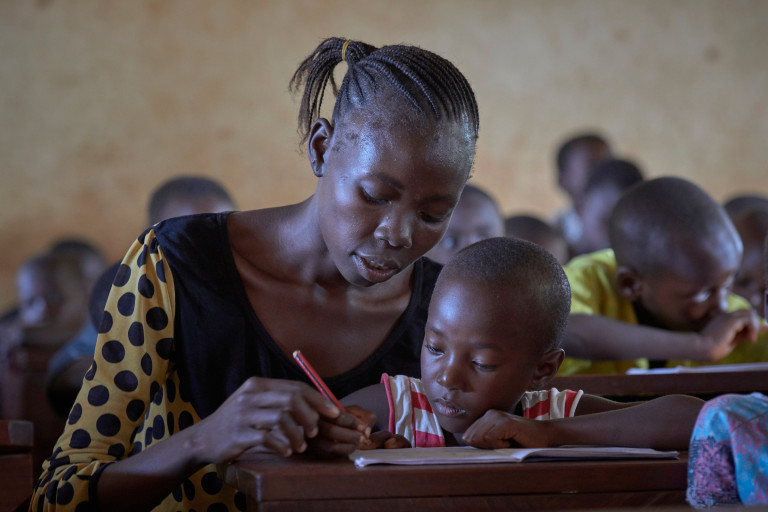 Joana Ilario, a graduate of the Solidarity Teacher Training College, helps one of her students at St. Mary’s Primary School in Yambio. Photo by Paul Jeffrey

To Gabe, “It is really a miracle that Solidarity with South Sudan can keep operating in this place. Even when the country was engulfed in the violence of its civil war, this school never stopped. It kept going, whereas everything else came to a halt.” A second Solidarity Teacher Training College in Malakal had to close its door after it was looted and severely damaged at the beginning of the civil war in December 2013. Government soldiers used it as a barracks for a long time but have since left its premises.

The world’s youngest country, South Sudan has seen little peace since it gained its independence in 2011. The armed struggle of the preceding 50 years has just continued with an on-again, off-again civil war, ethnic cleansing and high levels of violence. About 400,000 people are believed to have died since 2013 as a result of South Sudan’s civil war.

Even during the current fragile ceasefire—a peace that Gabe says “is not really peace; we’re calling it ‘no-war’”—in one recent week alone, four STTC students had family members or close relatives killed.

As a result of the many years of ethnic conflict, South Sudan has more than 4 million people living in refugee camps in neighboring countries or in United Nations camps for internally displaced persons. Maryknoll Father Mike Bassano serves as the Catholic chaplain at one such U.N. camp in Malakal; he too is part of Solidarity with South Sudan. Another Maryknoll priest, Father Thomas Tiscornia, served until recently as a chaplain with Solidarity at the Catholic Health Training Institute in Wau.

Hurrish began his service career in the Peace Corps in 1984 working on water projects in Kenya. Later he worked in Sudan with refugees and then in Ethiopia in famine relief. He was a consultant in Uganda, Somalia, South Africa and Peru, and worked with a mission group in Central America. He also taught English in China for 10 years.

Nine years ago, Gabe worked for a time for Solidarity with South Sudan in its Rome office, as this initiative of religious orders got off the ground. “I was in Rome, holding down the office,” he says. After he left, he kept in touch, and six years later, he spent a summer teaching in South Sudan. “After I got home, I wondered, ‘Maybe it’s time to go back to Africa and help out.’”

He had known Maryknoll missioners from his previous stints in overseas mission. “I bumped into them, here, there, and everywhere. And I knew that they had a good program and that they prepared their people well, much better than many other volunteer and lay mission organizations I have encountered.”

When Gabe reached out to Maryknoll Lay Missioners about serving in South Sudan, Marj Humphrey, its director of mission who had served in a camp for internally displaced persons in south Sudan in the 1990s, was intrigued and helped to make it happen. After going through the orientation program with the Class of 2017, Gabe started Maryknoll Lay Missioners’ new commitment in South Sudan in January 2018. He is affiliated with and receiving support from the lay missioners’ neighboring Kenya region.

Gabe traces the beginnings of his lay missioner vocation to being inspired from a young age by his uncle, Father Alex Bombera, a Third Order Regular Franciscan priest who served for 32 years in India and Brazil. He remembers being enthralled by his stories. Once Gabe had started his own overseas mission work, whenever he would return to the U.S., Father Bombera would always be the first person he went to visit. “He understood me, and I understood him,” Gabe says. “We would reminisce for hours on adventures and stories from our missions.”

When Father Bombera died at almost 99 years of age, the provincial, at the time of burial, reached into the casket just before closing it and took out the priest’s mission cross. It normally remains there to rest with the missioner forever. But the provincial told him that because of his close missionary bond with his nephew, “Father Alex would have wanted me to carry his crucifix back into mission. Tears flowed from my eyes, as I took this most precious gift. Now I know that a portion of the spirit of my uncle will be with me wherever I go.”

As he walks around the STTC campus, Gabe says, he wonders about the future of the students there. “Will they be able to overcome the incredible odds stacked against them? Maybe one day an STTC alum will be a minister? Why not? Already several graduates are school principals.”

He adds, “Seeds have been planted by the Holy Spirit. Now we need to let them grow. By the grace of God, I am privileged to be a part of the foundation that is being built by Solidarity in this country.”

A version of this article appears in the September/October 2019 issue of Maryknoll magazine.

END_OF_DOCUMENT_TOKEN_TO_BE_REPLACED 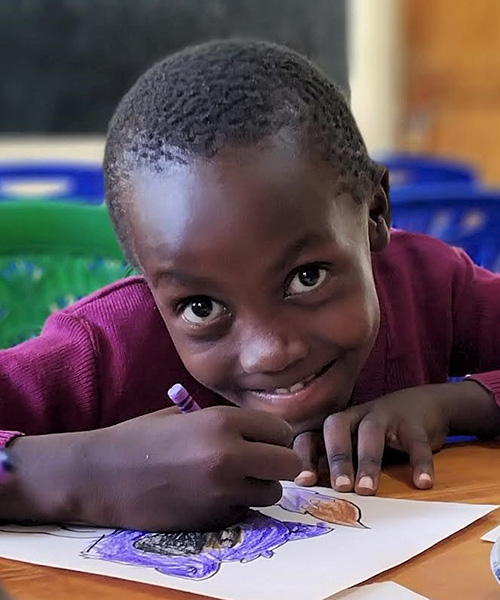