A welcome ‘tent’ for homeless Salvadorans 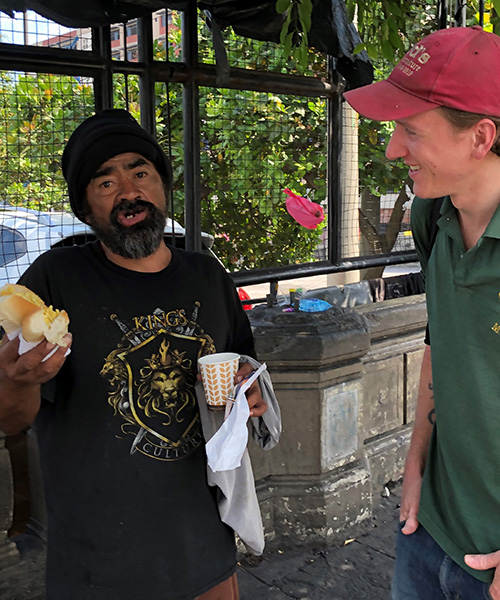 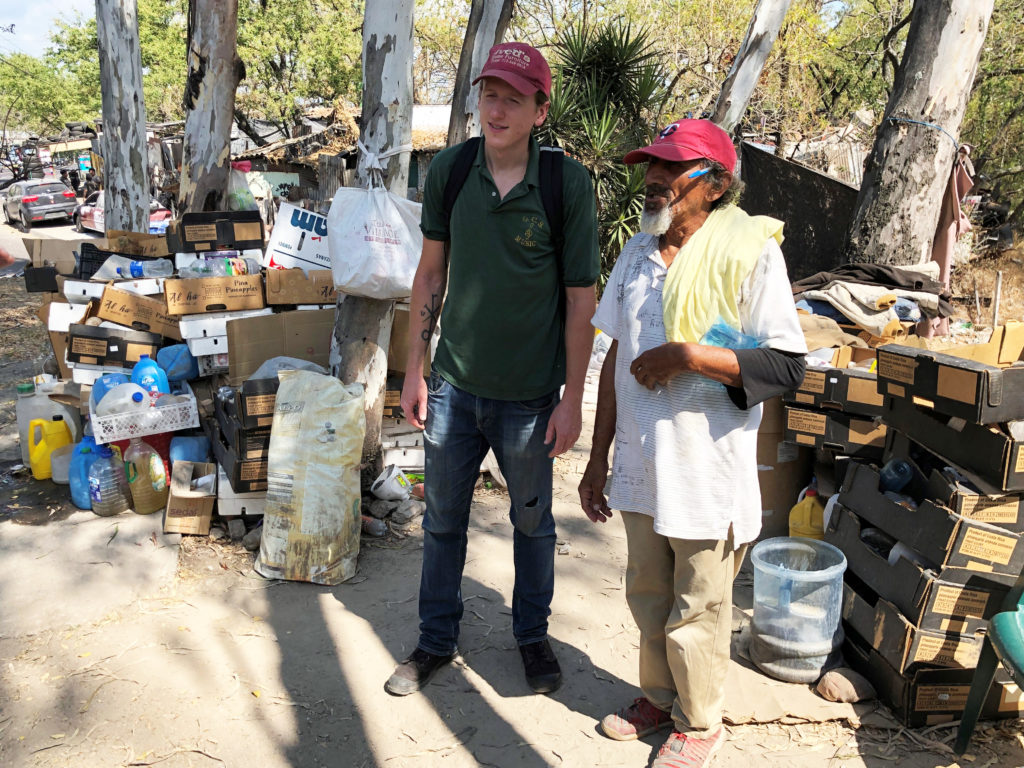 Tim Ross (left) chats with Señor Lopez, a homeless man, during a delivery of bread and coffee in San Salvador.

As María, Óscar Ulysses and Tim Ross make their rounds with a thermos of coffee, dozens of egg sandwiches and small pouches of cold drinking water, they are warmly greeted by the homeless people of downtown San Salvador, capital of El Salvador.

Today the crew is coming later than usual, and people are all the happier to see them. “We thought that maybe you weren’t coming today,” several say. Many of the area’s homeless men, women and families sleep directly on the sidewalk pavement or on cardboard, getting drenched during the rainy season and breathing in the exhaust fumes from the relentless San Salvador car and truck traffic.

Maryknoll lay missioner Tim Ross has led this bread-and-coffee route on Friday and Saturday mornings. In the summer of 2018, he teamed up with Erica Olson, a former Maryknoll lay missioner who now works for Habitat for Humanity in San Salvador, and Nelly Ramirez to start a Catholic Worker hospitality house in Barrio San Miguelito, one of the city’s neighborhoods. 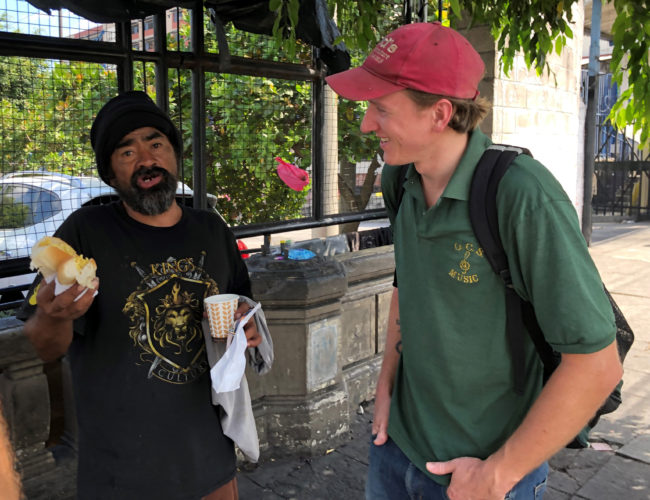 Tim talks with Louis after giving him a sandwich and coffee near San Salvador’s General Hospital.

In their newsletter they explain that they named the house La Carpa (The Tent) “as a reminder of our impermanence on Earth, our longing for an eternal dwelling place … [and] the lifestyle of those who we are trying to reach: always wandering, hungry, looking for food and a safe place to sleep.”

María, who didn’t want her last name used, and Ulysses are two of four formerly homeless residents who have been part of La Carpa community for more than a year. They accompany Ross on a downtown route to encounter homeless people and give them not only a much-needed meal, but more importantly a ministry of presence and friendship.

“Tim is an angel. Tim has given us friendship… and we love him,” says Louis, a homeless man, in fluent and almost accent-free English.

Many of the homeless people in San Salvador struggle with addiction issues, Ross says. Louis recently got clean for a few months and sold sweetbread on buses, but now he’s back on the street.

“There is a lot of drug use, and even though many of the people on our route express a desire to change their lives, they don’t see an easy way out,” Ross says. “They’re very used to nobody caring about what happens to them.”

Like a surprising number of other homeless people in San Salvador, Louis has picked up his flawless English from spending many years working in the United States. Like many others, he was deported and is having trouble reintegrating and finding work in El Salvador. 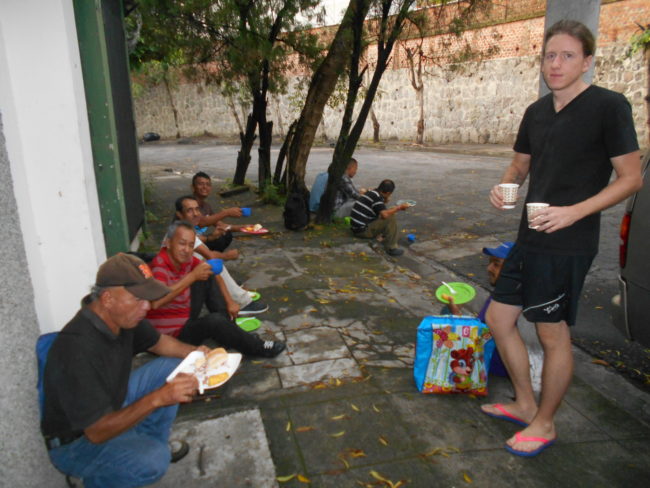 According to Ross, that’s a very common story among homeless people in El Salvador. “Many have lived in the U.S. for much of their lives and have more of a cultural connection to the U.S. than to El Salvador,” he explains. “Once back in El Salvador, they often have no support network. It’s very difficult for them to succeed here, given that El Salvador is highly territorial. Newcomers are looked upon with, at best, suspicion.”

Being an outsider is very dangerous, particularly in areas controlled by gangs, which is a big problem in El Salvador, he says. Many end up on the street, and from there, it’s a very easy path to addiction.

Two of the La Carpa residents also lived in the United States for decades. Christian Rivas lived and worked in Virginia, where he raised two daughters—now 21 and 16—from whom he became separated when he was arrested for driving with a suspended license.

After eight months in an ICE detention center, he was deported to El Salvador. Since his return, he has been working hard—first in construction and now at a call center—but he ended up living on the streets and in homeless shelters until finding his way to La Carpa in November 2018.

Fileno Antonio Atola spent some 25 years in the United States, working in many different places and in jobs ranging from dishwasher and day laborer to salmon cannery worker in Alaska. He struggled with alcoholism, but has been sober now for many years. He has been back in El Salvador since 1996.

“I don’t have much family here,” Atola says, “a daughter, a granddaughter and a cousin. But I don’t want to bother them.” Together with Ross and other residents of La Carpa, he volunteers at a nearby soup kitchen, the Comedor Mamá Margarita of the Catholic María Auxiliadora parish as well as another local church. “God put Tim in my path,” he says.

Recently La Carpa switched its outreach from the bread-and-coffee route to providing meals at the house. The community now serves breakfast six days a week to some 30 people outside its doors on Pasaje 2 in Barrio San Miguelito. 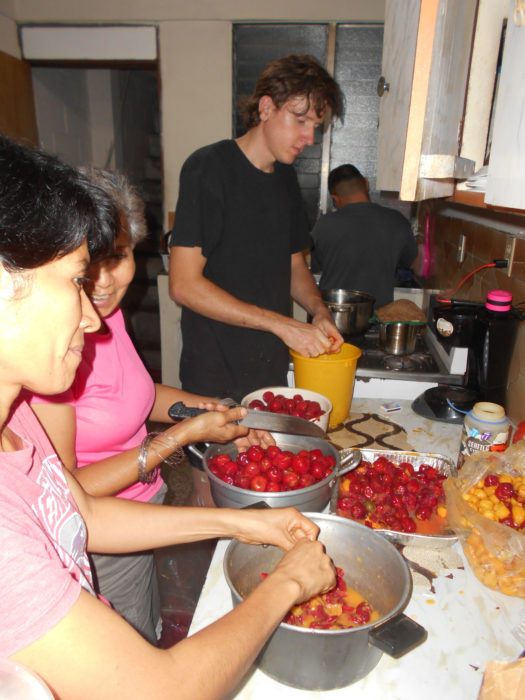 The bread-and-coffee route succeeded in fulfilling its original intention, says Ross. “People got to know us … and many folks now come to our place for the breakfast.”

However, serving dozens of people at La Carpa has created some challenges. “There is some bad blood between different groups of homeless people in San Salvador, and we’ve had to break up several fights out on our sidewalk,” says Ross. As a result, they have had complaints from neighbors about “ruining the neighborhood.”

Ross, Olson and Ramirez have set up their hospitality house as a place where they could invite people to stay and live as permanent residents—and to build a community together.

“Our hopes for this house,” says Ross, “are to have a tight-knit Christian community, where people who traditionally have been discarded by society can find a place where they are important, valued and welcomed, where they can contribute. What really affects them deeply is when they realize we are here as their friends. We are here as family.”

Some of the residents struggled with that at first. “They were accustomed to living very independently, with no one’s help but their own,” Ross explains. “It’s very touching and gratifying to watch that transition when they realize, ‘Oh, they’re serious. They actually want us to be involved. They want us to be a part of their family.’ ”

In addition to helping to serve the homeless community, the seven residents at La Carpa also get together every Saturday for reflections, prayer and Bible study as well as conversations, games and other community-building activities.

“Probably some of the most important work that I do is just sitting and listening to people’s stories,” Ross says. 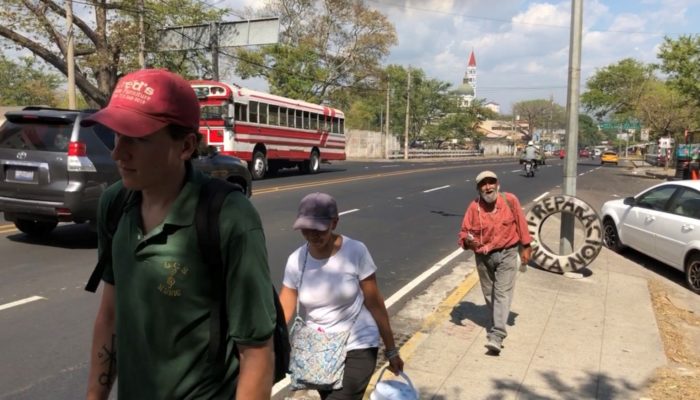 Tim, María and Óscar on their bread-and-coffee route on Prolongacion Blvd. Tutunichapa in San Salvador.

“Everybody here has gone through traumatic experiences, whether it’s having lost their home or having lost their family, being the victim of injustice in this society or of injustice in the United States,” he adds. “It’s often heart‑breaking stuff. Once people shift out of survival mode, a transition takes place. They start processing the experiences that they’ve been through, and that is a painful process, but it’s also healing.”

La Carpa’s residents come from different Christian traditions. However, Ross says, “We’re all very conscious of the call to serve our neighbors, and we very much emphasize a spirituality of recognizing Christ in everybody.”

This article appears in the January-February 2020 issue of Maryknoll magazine.