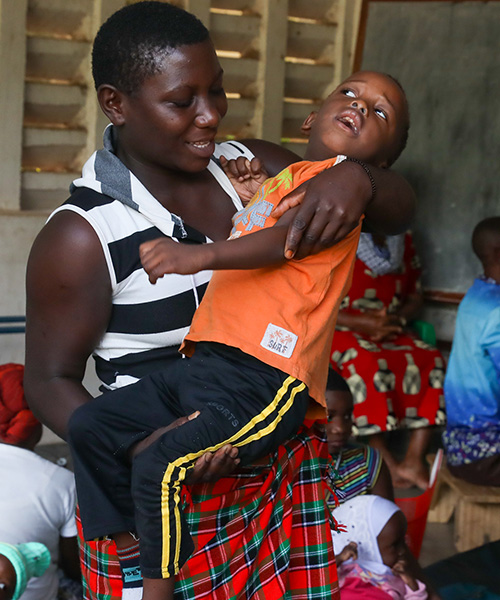 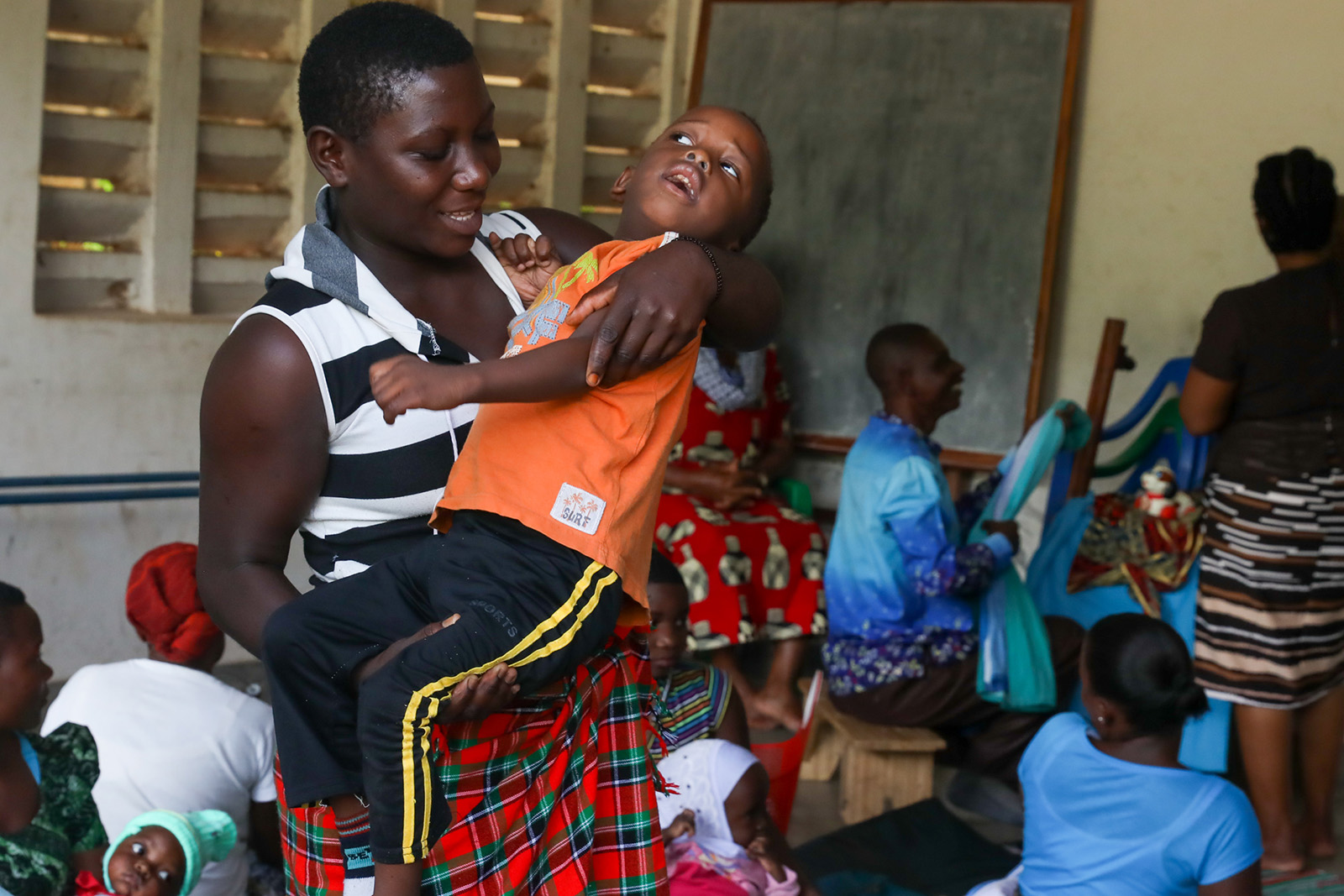 Mother and child in the Mabatini Community Health Program. Photo by Jerry Fleury.

For the past year, our Maryknoll parish’s Community Health Program in Mabatini, a neighborhood of Mwanza, Tanzania, has been helping children with disabilities and their families purchase government health insurance plans. The idea to prioritize health insurance came from seeing the complex health needs of children with disabilities, the financial impact that even routine visits to the doctor can have, and the unfortunate deaths of two children in our program within months of my arrival here last year. With the relatively low cost of health insurance for a child for an entire year, this seemed like both a financial and moral imperative.

As we approach one year out from the start of this initiative, the staff in Mabatini and I have been evaluating the success of the program. To date, we have purchased 77 individual health insurance plans. These include plans not just for children with disabilities but in many cases also coverage for their families. This health insurance covers the cost for routine tests, medications and doctor’s consultations. Unfortunately, more major tests such as a CT scans or MRIs, consultations with specialists, or surgeries are not covered.

While the staff and I continue to follow up with families regarding their experiences using health insurance in the Mwanza healthcare system, I have learned much about how access to healthcare remains just one barrier in successful utilization of the healthcare system. That system lacks resources in personnel and expertise on disabilities and is often financially disincentivized to help patients paying by health insurance, rather than private pay.

One example of this came early on in our health insurance initiative, in October of last year. A child with a cerebral palsy was experiencing frequent bouts of vomiting, and his mother had noticed behavioral changes that indicated he was in pain. Having supported this mother in purchasing health insurance for her child, we referred them to a local clinic. The next day, the mother came back and said that, although she had gotten to see a doctor, the laboratory had been closed for an unknown reason, and she would have to go back again today for her son to be tested.

Though perplexed as to how the laboratory could be closed in the middle of the afternoon on a weekday, we helped her with the bus money to go back to the clinic, a significant expense for this young woman. A short while later we received a call from her saying the clinic had somehow misplaced her son’s file, and that they told her he would not be able to get the tests. Worried about her son — and overwhelmed in this busy clinic — she was devastated.

Thankfully, one of our staff members was available to go to the clinic and convince a nurse to take the time to find the file, which was buried under a stack of papers in the pharmacy. The child received the tests but was told the pharmacy was out of the medication he would need. This would mean that she would have to go to another pharmacy and pay out of pocket, as insurance is only valid at government facilities. Though our staff member insisted on getting referred to another government clinic that had the medication in stock, the slow pace of the pharmacy staff, and the need to get this ailing child home eventually won out, and our staff member paid for the medication elsewhere and was reimbursed by our program budget.

We have seen this scenario — and many others like it — countless other times. A doctor who misplaces a file and refuses to take the time to find it. A mother who gets told a particular facility cannot perform a specific test but receives no guidance or referral to one that can. Medications being consistently out of stock for an insurance carrier, but reappearing when someone offers to pay cash. A caregiver not being taken seriously by a healthcare provider when describing a concern for their child with a disability.

What we have learned through this initiative is that our families face many different problems in accessing healthcare, with no easy solutions presenting themselves. Some explanations point to money. Others to biases against parents of children with disabilities, based on the belief that disability is the result of a personal failure in caregiving. It is also easy to observe a general lack of education on the health intricacies that accompany certain disabilities, even by some of the best doctors available.

We are increasingly convinced, however, that discrimination based on education and wealth — sometimes intentional and other times unconscious — is the greatest barrier to our families receiving adequate care.

With huge disparities in wealth and education in Mwanza, we have seen many healthcare professionals who are unable to understand the unique challenges that a caregiver with no formal education would have in asking pertinent health questions. These caregivers experience anxiety about asking for more information or a second opinion, about discrimination based on gender, and about the role that shame plays in a society rife with stigma and misinformation about disabilities.

This is by no means a condemnation of every doctor, nurse, or hospital staff member working in Mwanza but has been a consistent concern for the more than 50 families we have consulted with.

Our experience with Tanzania’s health insurance program, and its evaluation, have opened my eyes about why “access to healthcare,” the ability to see a doctor, get treatment, or be hospitalized, are really only Step 1 for this particularly vulnerable population.

Our staff has continued to brainstorm ways to help caregivers better advocate for their children in the healthcare system. However, we will always be working against prior negative experiences and other cultural factors that make it hard to convince these caregivers that their concerns are valid, their questions deserve answers, and that their child’s life has just as much worth as any others.

This project has helped all of us at Mabatini Community Health gain a fuller picture of the challenges of these families, and greater insight into how we might be of service. It has also reemphasized to us something central to our mission: that sometimes the key difference between health and sickness isn’t access to doctors and tests, but respect and compassion.

END_OF_DOCUMENT_TOKEN_TO_BE_REPLACED 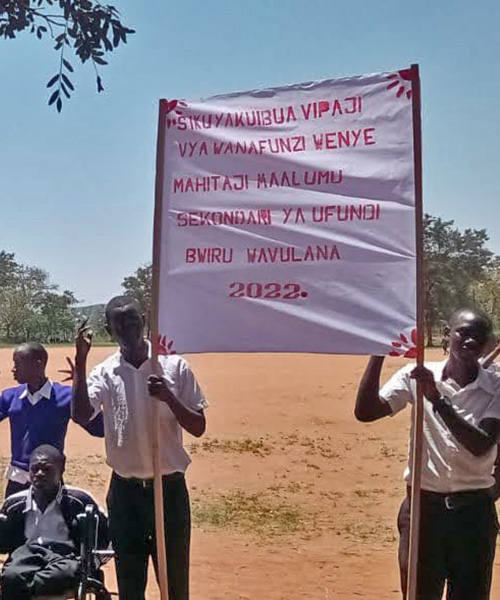