Traveling South Sudanese style is nothing for the faint-hearted. 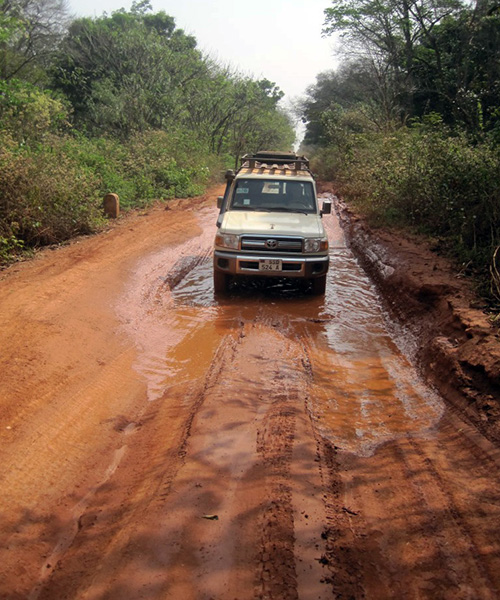 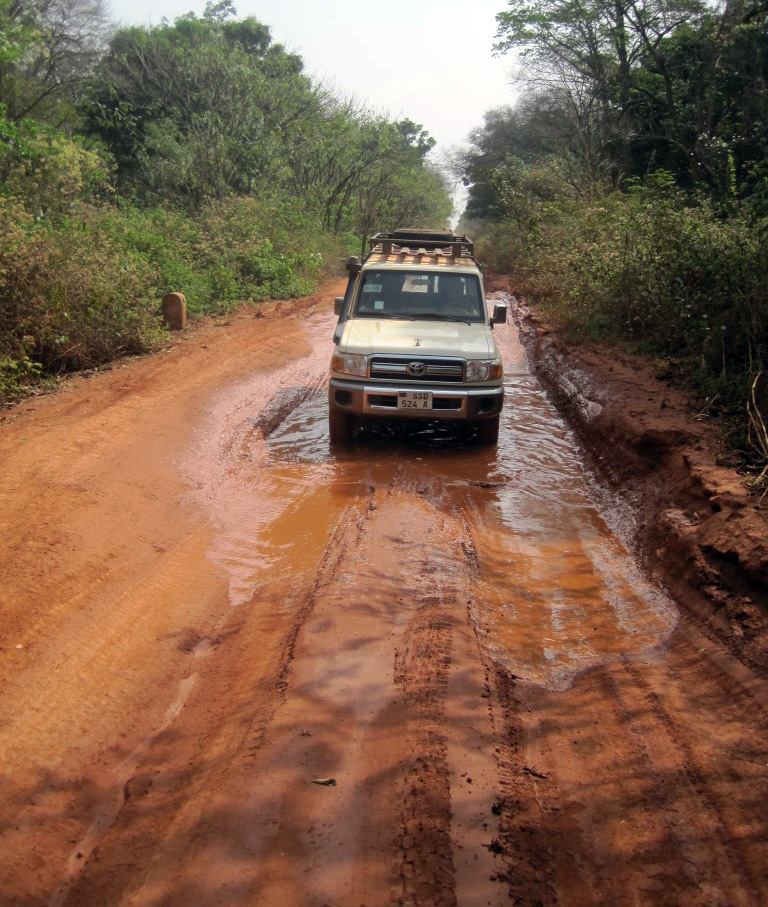 The main road to Tombura, February 2019

I am beginning my 27th year living outside the United States and my 11th year living in Africa. In all those years I have seen some rather isolated places and traveled some pretty rough roads but I have never experienced the torture of the Tombura road. I cannot call it a road. It has almost nothing in common with any known roads in the world. At times it was more or less just a trail through the jungle. Yet this is the main north-south route in South Sudan’s Western Equatoria state.

I have been trying to think of how to describe it. If you took a pickup truck and ran it down a snow mogul slope, that would be easier than what we had to deal with. If you drove a truck straight up the side of a rugged mountain, you could probably go faster. It felt like we were on some wild Disney ride, as we would go up and then down and then lean left and then lean right and then all over again. We wore seatbelts not for safety but to simply hold ourselves in our seats.

The distance from Yambio to Tombura is a mere 112 miles (180 km). Yet this trip takes six hours to complete—one way! For the past several years the government has done absolutely nothing to maintain or repair roads in most of the country. Hence, the jungle begins to crowd back into the cleared spaces. At times the Tombura road was only wide enough for one vehicle. What would happen if we met another vehicle coming from the other direction? Someone would have to back up a long way!

The road was filled with craters. We don’t say potholes because these cavities were so deep that at times our vehicle was almost swallowed by the large gaps in the road. At other times, the gashes and gullies which have formed due to water erosion are so steep that the Land Cruiser would tip at a very disconcerting angle. We were at a 35 degree angle or more on several occasions! Hairy stuff.

To add misery to misery, the orange dust on the road was as fine as baby powder. It seeps into every crack and crevice in the vehicle and in your body. There is no escaping it. I opened the back door to load up some luggage and my hands were orange from the dust. And the whole time we are breathing this stuff. Three days after the trip I was still trying to clean out my nasal cavities. After one day of travel, I found the bottom of my socks in a closed tennis shoe were covered in orange dust. 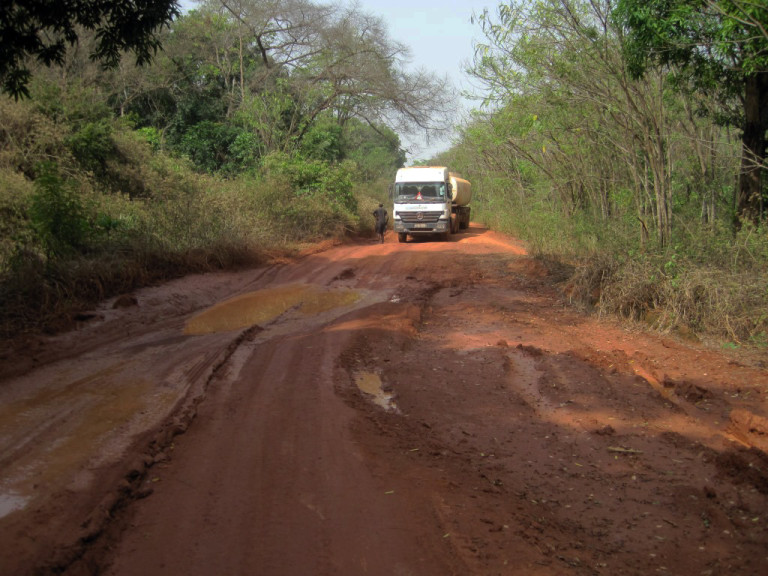 Driving under these conditions tries a person’s will. How much torture can the body take as it bounces inside the cab from left to right and up and down and forward and backward?

There were a few stretches of flat, level ground, but they were few and far between. Most of the time we were slowly working our way through a maze of craters and holes and gashes trying not to tip the vehicle or hit a rock. Our average speed was 19 miles per hour (30 km per hour).
We met a few convoys of massive trucks along the way. Several were stopped. Broken axles, flat tires, and cracked drive shafts are very common on the yawning craters and steep declines. At one point, we actually had to drive through the jungle brush along the side of the road to get around a stopped truck, which was blocking all traffic as it sat right in the middle of the road.

We finally arrived in Tombura itself to visit some Solidarity teachers and check on the program that Solidarity and World Vision offer for in-service teacher training. The town has an airstrip running right alongside the main road of the town. We had to cross this murram (clay) a couple times to get to the school where our teachers were working. Not a pothole or crevice or fracture in it—1,000 meters of straight, flat surface! I wanted so badly to run our Land Cruiser straight down that runway at break neck speed to feel what a real road is like.

But alas, our principal had a calmer attitude and disallowed me that thrill.
After six hours of driving Sunday to reach Tombura and six hours Monday to return, I actually had calluses forming on my palms from manhandling the steering wheel. Our legs were like spaghetti. But by the grace of God, we arrived safe and sound and did not have any problems with the vehicle. South Sudan continues to provide thrills and excitement for every adventurer’s taste.