2341
APPLYDONATE
Home » Tanzania » Entering into the conversation of mission

Entering into the conversation of mission 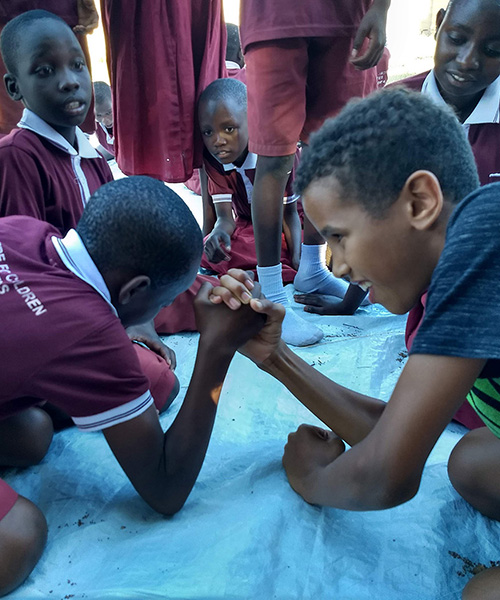 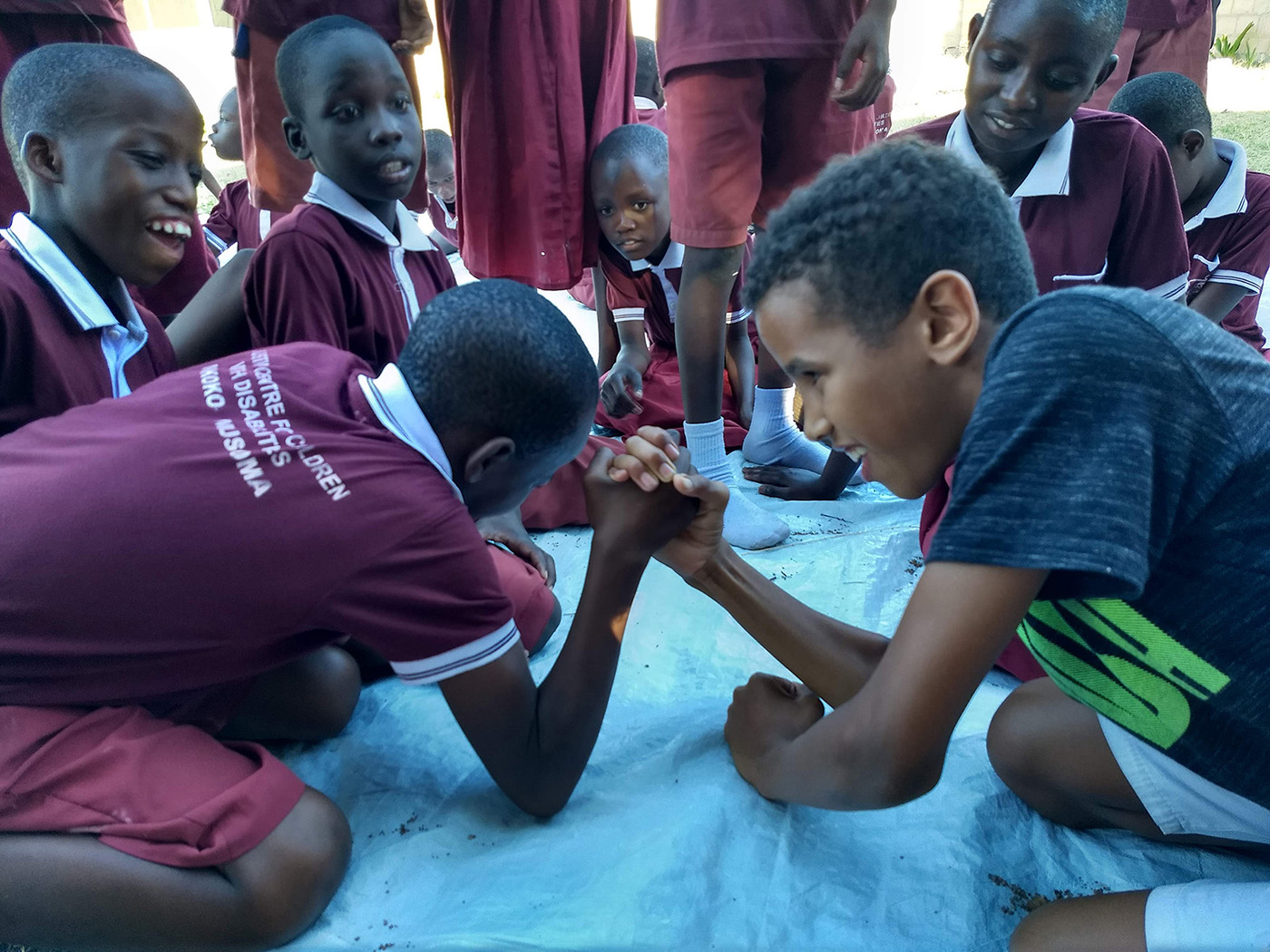 There’s a boarding facility that our missioners in Musoma work with that we have been to visit a number of times as a family this year. Over time, we have been getting to know the students and staff that stay there. We’ve played 500, Keep Away, and board games with the residents; made music and shared meals; and Justin has arm-wrestled many of the kids there.

This boarding facility is called St. Justin’s Center for Children with Disabilities and is run by the Tanzanian Immaculate Heart Sisters of Africa. Seventy-five students in total stay at St. Justin’s. Fifty-three children are deaf, 22 have physical disabilities, and 20 have intellectual disabilities (the numbers don’t add up because some children have more than one disability). Without such accommodation, living in villages where school would be a long walk away, many of these students wouldn’t be able to attend school and deaf students wouldn’t have access to teachers who can sign. 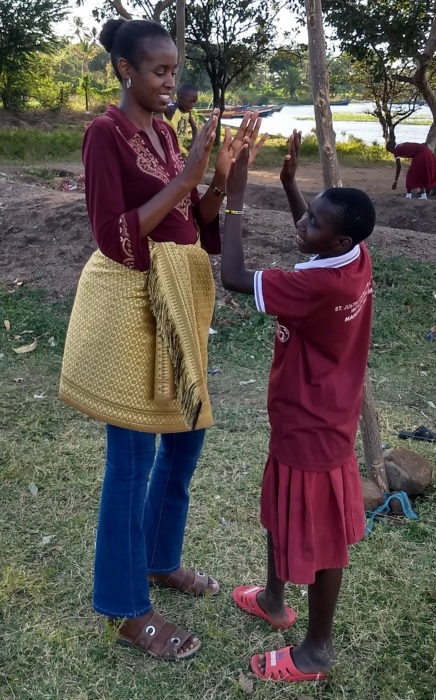 When we first visited, our kids—and I, too, to be honest—were a bit hesitant that we didn’t know what kinds of things the children there could do, or would be interested in doing. It didn’t take us long to figure out that they enjoyed the same things we did, could do them just as well, and with more joy! We found their joy contagious and always looked forward to seeing them.

On one of our visits, I saw some of the kids doing handstands. I hurried over to join them and started to do some movements from Capoeira (the Afro-Brazilian martial art I’ve been training in for the last couple of years). They were intrigued, but more importantly, they seemed to know intuitively how to respond to the moves, for example, escaping a kick, or maintaining distance while facing your partner as they move.

We didn’t need to talk in order to explain or understand each other! I showed them more moves, and they tried them until they were able to do them, too. Capoeiristas (practitioners of Capoeira) describe this process of responding to another’s movement as “answering the conversation.”

One of their teachers, Amani, was practicing with us. He is also deaf but has managed to learn to speak English. He had practiced Karate before and was really excited to learn more Capoeira. As we were leaving, I thought to exchange contacts with him. I quickly realized that written communication through texting and social media opened up a whole world of communication!

Amani shared that he is interested in art and music. He has a twin brother and had stayed at St. Justin’s himself as a student. Recently, he completed a teacher training program but loves biology and has aspirations to be a doctor one day. He was also fascinated by my life—how I came to live and work in Tanzania, how Loyce and I met and married, and even what I thought about our different cultural backgrounds. I was soon one of his 4000-plus friends on Facebook, and part of his very active and conversational and humorous Facebook feed! 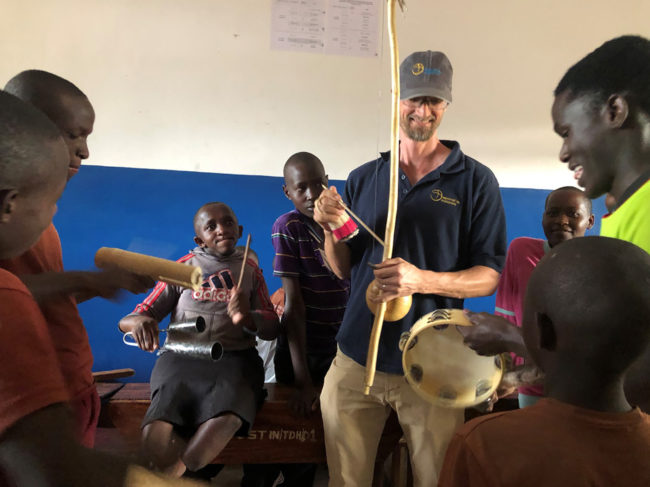 We had a blast making Capoeira music

In Capoeira, the movements follow the rhythm of music and those who aren’t the two “playing the capoeira game” accompany it by playing simple musical instruments, singing (in Portuguese), and clapping. The next time I visited St. Justin’s, I figured I would bring some of the musical instruments, which are familiar here as they are actually traditional Bantu instruments.

Most of them I had made myself or had found locally. Think sticks, wire, bamboo, and sheet metal for the bell. I did wonder again (I still hadn’t learned my lesson, I guess), how it would go for deaf people to play musical instruments. It’s hard enough for me, and I’m just tone deaf! At any rate, of course they had a blast making music.

As we were playing and switching instruments, I lost track of who was hearing and who not but showed the rhythms the same way regardless—by watching the timing of the other instruments and by feeling the vibrations. While it may not have been in perfect harmony, we were happy.

Needless to say, the experience made me question some of my assumptions about mission. One of the things that I repeatedly struggle with is the expectation of solutions from a missioner. Usually the lesson for me has been that mission is more about encounter.

At its heart, mission is like Capoeira—it’s about moving together in response to one another and about finding God in the space between.