‘Project Lorax’ will provide sustainable development and a livelihood for 100 families, while planting 40,000 new trees. 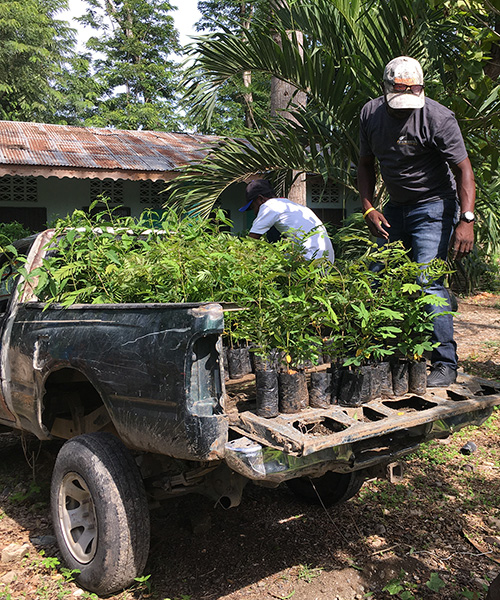 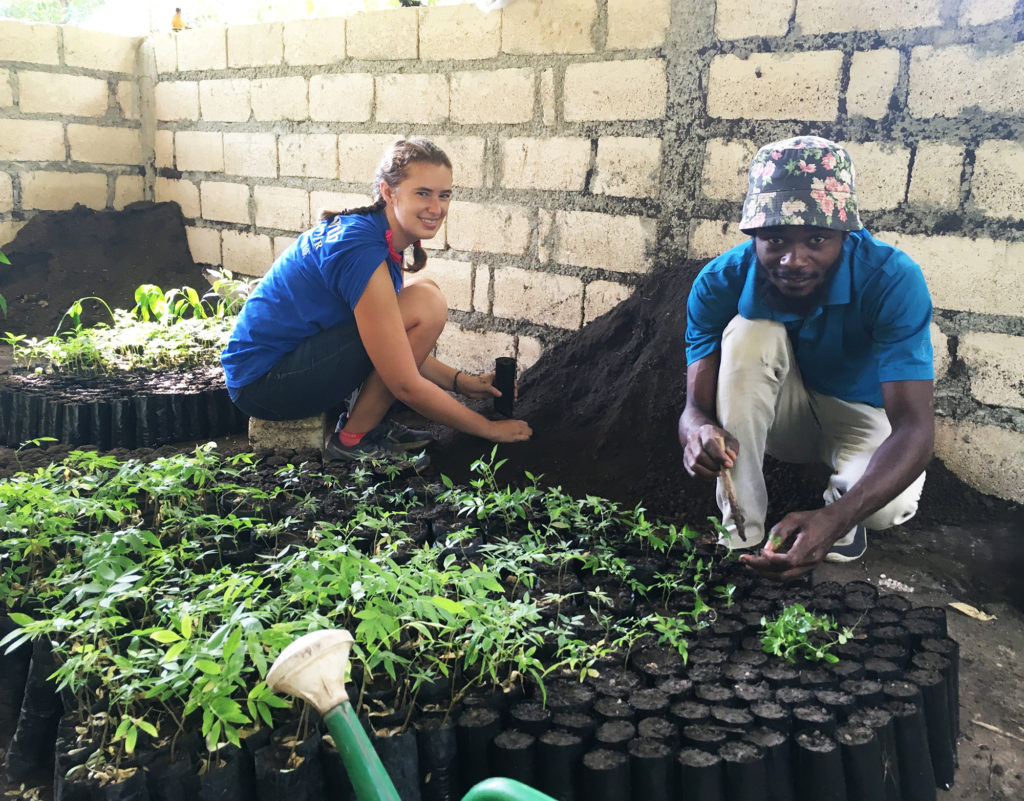 Just south of Gros Morne is a zone called Perou. It is very unassuming, but great things can come from unassuming places such as Perou’s school, Lekòl Presbyterale Perou. Its graduates have been very successful academically, regularly scoring in the 90th percentile in their sixth-grade exams. They have been able to excel despite the fact that teachers often go for months without pay.

Many parents can’t pay for their children to go to school. They had been planting pitimi (sorghum) until about four years ago when an aphid infestation wiped out the crop. They have yet to recover or replace pitimi with another income-generating solution.

The church and school partner with Eastern Illinois University in Charleston, Illinois, through its Newman Center’s Haiti Connection. Having already identified the school as an asset to the community, EIU wanted to collaborate with it to help rejuvenate the area. The goal was to seek a sustainable solution instead of just paying the teachers’ salaries directly. 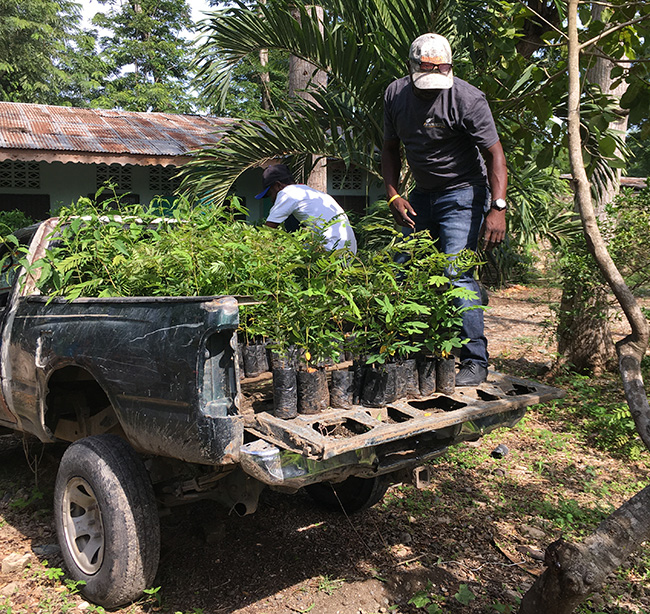 The community connected with the Jean Marie Vincent Agricultural Center, often referred to simply as Grepen (after the zone in which it resides). Teligene and Aneus, an agronomist and agronomy technician respectively from Grepen, were asked to engage the community in discerning what agricultural activity would be beneficial and help the parents generate income to pay for their children’s schooling.

Eventually, a plan of action was formulated and what the EIU students call “Project Lorax” was born: Families would plant trees in their gardens to promote reforestation while also responsibly harvesting the trees to be able to sell as charcoal. As a result, the parents would be able to pay the school.

Of the 110 families, 100 have land on which to plant trees, while the remaining will enter into Grepen’s goat program. Three tree nurseries were contracted to raise a total of 40,000 trees to be planted. The families received an extra incentive to take care of the trees: As long as 60 percent of the trees are still living on their land, the families will receive 10 Haitian gourdes (about 9 cents) for each tree alive. These assessments will happen for the next two years in September or October.

Since arriving in Gros Morne in March (just before the start of the pandemic lockdown), I have been going to Grepen almost every day. Initially I primarily went to improve my Creole in a positive environment with people who are used to working with foreigners. But being part of this “Project Lorax” has become one of my joys. There is a little miracle with each new tree that sprouts and a great satisfaction in helping an ailing tree heal.

My fellow Maryknoll lay missioner and housemate, Abby Belt, and I also looked after a cluster of forgotten trees that were in disarray. We tended to them, pulling them from torn bags and transplanting them into new bags with dirt. Not all of them survived, but many of them are very healthy and happy now!

Over the past few months, I’ve filled thousands of bags with dirt, transplanted thousands of seeds into them, watered them nearly every day, moved them from shade to full sunlight, and watched them as they grew taller and taller, their leaves bigger and bigger. 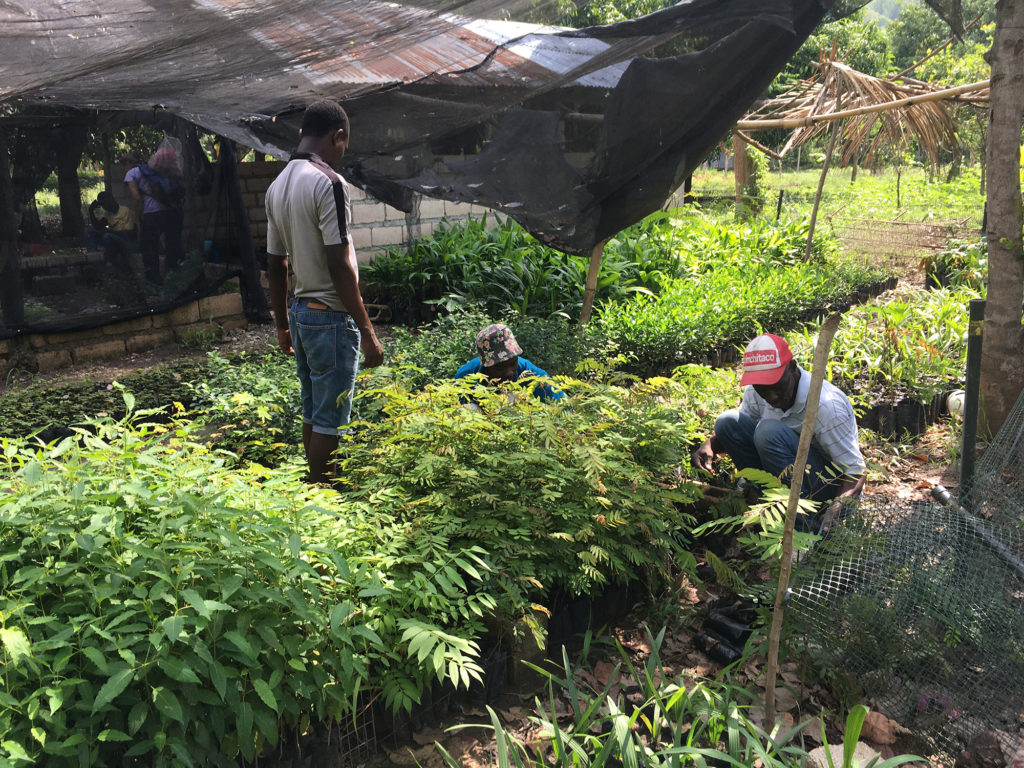 When it’s time to say goodbye, I whisper words of encouragement and pray they grow well. Maybe it’s sentimental, but I like to believe they are listening. We have raised thousands of cedar, acacia, and oak trees, sending them out to Perou to be planted. So far, 32,000 have been planted for what we call “Project Lorax” (not all of them from this tree nursery though). Only 8,000 left to go.

Project Lorax has seen a few delays, mostly from two large national problems. The first was last year’s “peyi lòk” (Operation Lockdown), when nationwide protests led to the closing of the borders and the shutdown of most institutions, businesses and activities — no school, lots of demonstrations, etc. It intensified during the fall of 2019, to the point where it even became questionable for me whether I would be sent to Haiti.

The second problem has been the COVID-19 pandemic, which has slowed things down considerably this year. And initially there were also some issues with bad seeds at Grepen.

Project Lorax has been working hard to promote community involvement as well as environmental and economic sustainability. It is giving the community the tools to become independent and self-reliant instead of depending on the charity of strangers a world away who don’t understand their culture or their problems.

That is also what Maryknoll Lay Missioners is all about. If we were creating dependency, we would be doing something wrong. When I leave here, there should be no collapsed projects or empty spaces that need filling — except for the hole that will be left in my heart.

It has been such a blessing to be a part of this project, and I look forward to the future and what it will bring for my mission here in Haiti.

Jill FosterJill Foster is a Maryknoll lay missioner in Haiti who works at the tree nursery of the Jean Marie Vincent Center in Grepen and other ministries of the Religious of Jesus and Mary in Gros Morne.